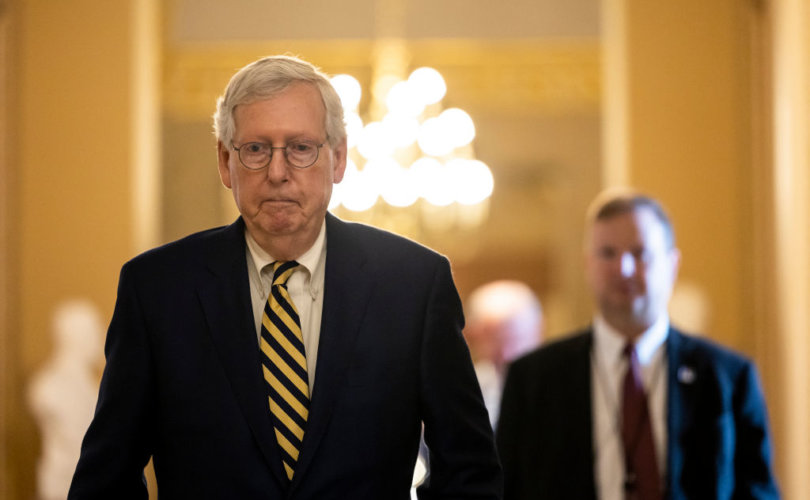 Masters, who secured a coveted endorsement from former President Donald Trump, triumphed in the primaries based on that seal of approval.

In the beginning, Masters was trailing his Democrat rival, incumbent Sen. Mark Kelly, by a significant margin of 12 points, but matters have recently swung in Masters’ favor, and a recent Emerson College poll has Kelly leading Masters by just two percentage points. Since the margin of error is around two points, this could be regarded as a tie.

This is a monumental achievement because Masters is lagging significantly behind Kelly in terms of fundraising.

So, how has McConnell reacted?

The Senate Leadership Fund, a super-PAC (political action committee) associated with McConnell, reduced its advertising budget in Arizona by around $8 million in August.

It was reported that McConnell was in talks with billionaire entrepreneur Peter Thiel, who spent more than $13 million on behalf of Masters through the Saving Arizona PAC in the primary, to provide financial support for Masters for the general election as well.

Despite that, Thiel, who is Masters’ friend and long-time employer, has resumed spending in the Arizona Senate race. In addition, Thiel’s Saving Arizona PAC announced it will be spending specifically to promote Masters.

The Sentinel Action Fund, a super-PAC associated with the conservative-issues group Heritage Action for America, has pledged to spend at least $5 million to boost Masters. Some $3.5 million from its fund will be dedicated to television ads, while $1.5 million will fund voter outreach.

So, what is the score on the fundraising?

By the end of June 2022, the Kelly campaign had raised around $55 million, while the Masters campaign reported raising around $5 million, according to the Associated Press. This has enabled Kelly to conduct a prolonged smear campaign against Masters, reaching every inch of Arizona digitally and geographically.

Kelly is pushing the narrative that Masters is a dangerous conservative fringe candidate. This seems to be congruent with President Joe Biden’s recent utterances, in which he baselessly and viciously attacked MAGA Republicans as semi-fascists and extremists.

Masters fired back and questioned Kelly’s description of himself as a moderate since he often toes the Democratic Party line.

According to a FiveThirtyEight tracker that monitors the voting records of congressional members, Kelly has voted in line with Biden’s position an astounding 94.4 percent of the time, with Conservative Review giving the Arizona Democrat an “F” grade for consistently voting for Biden’s leftist agenda.

How does the advertisement budget compare overall?

So far in Arizona, Democrats have purchased $39 million’s worth of ads between now and Election Day, compared to $14 million from Republicans.

Should Masters emerge victorious in Arizona, it would not only put the GOP one step closer to retaking the Senate, but also rid the legislative body of one of its most radical members in Mark Kelly.

McConnell’s motives for not supporting Masters are possibly personal.

During the heated primary campaign, Masters said the minority leader needs to be replaced and that McConnell is not exactly adept at legislating.

Since his triumph at the GOP Arizona primary, Masters expressed hope for McConnell’s support while conceding that he’s “not Mitch McConnell’s favorite candidate.”

Masters isn’t the only candidate receiving a cold shoulder from McConnell.

Senate Republican nominees such as J.D. Vance (Ohio), Mehmet Oz (Pennsylvania), Adam Laxalt (Nevada), and Herschel Walker (Georgia), all of whom were endorsed and backed by President Donald Trump during their states’ respective GOP primaries, haven’t exactly received much financial support, either.

This financial support is vital because it enables campaigns to counter Democrat smear campaigns and reach out to independent or ignorant voters.

In August, McConnell questioned the caliber of some of the Republican candidates for the U.S. Senate.

McConnell said the following regarding the midterms:

“I think there’s probably a greater likelihood the House flips than the Senate. Senate races are just different – they’re statewide, candidate quality has a lot to do with the outcome.”

This is shocking and unprecedented.

In politics, every candidate and his party leader always display optimism and confidence about their chances in electoral races, even for the candidate who is doing poorly.

But McConnell is spreading negativity about his own party.

What could the reason be?

Perhaps because he knows that if the GOP wins with a significant number of MAGA candidates in the Senate, he will lose his leadership position.

McConnell, hence, would prefer a GOP loss if it means him retaining his status as leader rather than the GOP winning a majority in the Senate but him being relegated to the back benches.

McConnell is also an old guard of the Washington establishment who is more comfortable working with Democrats than MAGA Republicans.

He is probably relieved that Trump is no longer in the White House. For him, working with Biden is much more convenient. He gives Biden what Biden demands.

The GOP voted to send billions of taxpayer dollars to Ukraine, devoid of tracking or accountability mechanisms.

McConnell reportedly told Biden that he wanted to blunt Trump’s influence by conveying to allies in eastern Europe that “Republicans believe NATO is important” and to “push back against the isolationist sentiment in my own party.”

Mitch McConnell also voted for a “gun safety” bill. Among the provisions in this bill is a “red flag” law that empowers a judge to order the seizure of firearms merely based on someone’s suspicion about his intentions.

McConnell remains mum about the January 6 Select Committee that exists to persecute Trump and the MAGA Republicans and which pushes the narrative that MAGA Republicans are dangerous extremists. The committee doesn’t even allow Trump’s representatives the right to cross-examine witnesses.

In exchange, the D.C. establishment overlooks McConnell’s conflicts of interest and potential corruption.

McConnell’s wife, Elaine Lan Chao, through her family, has extensive business interests in China and close ties with the establishment in China.

Chao was the secretary of transportation in the Trump administration. It was said that Chao used her office to promote her family’s shipping business, even trying to include family members in high-level meetings with Chinese government officials.

There were allegations that Chao boosted her husband’s political fortunes by showering attention and grant money on McConnell’s constituents and prominent Kentucky supporters.

If MAGA Republicans win during the midterms, they could begin working against the establishment. There may be sanctions or restrictions against China, which could affect McConnell personally and financially.

Hence, it seems to be a combination of self-interest and loyalty to the establishment that is dictating McConnell’s reluctance to support MAGA candidates.

So, what happens now?

Obviously, McConnell has to be stripped of his leadership position in the Senate and be replaced by Sen. Rand Paul, Sen. Josh Hawley, Sen. Ted Cruz, or another candidate of high caliber.

What can the donors do?

The donations, irrespective of the amount, must be made to specific campaigns and not to the overall GOP or PACs.

In the end, that could be a good way to boost the MAGA movement.