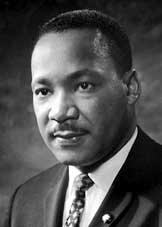 Today America honors both the life and noble work of the Rev. Martin Luther King Jr., a Bible-believing Christian minister who did more to advance the cause of race-based civil rights than perhaps any other person in recent history.

Regrettably – and as they do each year – the same flock of opportunist “LGBT”-activist vultures will quickly swoop in, and pick the live flesh from MLK’s character-based “dream,” to advance their own behavior-based nightmare.

In what amounts to a sort of soft racism, this mostly white left-wing faction has, over the years, disingenuously and ignobly hitched its little pink wagon to a civil rights movement that, by contrast, is built upon the genuine and noble precepts of racial equality and humanitarian justice.

What was MLK’s position on the homosexual lifestyle and so-called “gay rights”? While he said little in public on the issue, what he did say made his viewpoint abundantly clear. Unlike the “LGBT” lobby, I’ll let Dr. King speak for himself.

In 1958, while writing an advice column for Ebony Magazine, Dr. King responded to a young “gay” man looking for guidance. To avoid being accused of “cherry-picking,” here is the exchange in its entirety:

Question: My problem is different from the ones most people have. I am a boy, but I feel about boys the way I ought to feel about girls. I don’t want my parents to know about me. What can I do? Is there any place where I can go for help?

Answer: Your problem is not at all an uncommon one. However, it does require careful attention. The type of feeling that you have toward boys is probably not an innate tendency, but something that has been culturally acquired. Your reasons for adopting this habit have now been consciously suppressed or unconsciously repressed. Therefore, it is necessary to deal with this problem by getting back to some of the experiences and circumstances that led to the habit. In order to do this I would suggest that you see a good psychiatrist who can assist you in bringing to the forefront of conscience all of those experiences and circumstances that led to the habit. You are already on the right road toward a solution, since you honestly recognize the problem and have a desire to solve it.

No amount of leftist spin can muddy Dr. King’s lucid position on the homosexual lifestyle. He recognized it as a “culturally acquired” “problem” in need of a “solution” – a “habit” stemming from a series of negative “experiences and circumstances.”

Although homosexual activists desperately cling to the fact that, after his death, Dr. King’s wife, Coretta Scott King, did voice some level of support for the homosexualist political agenda, the undeniable reality remains that, based upon his own words, Dr. King supported neither homosexual conduct nor “LGBT” political activism.

Indeed, it strains credulity to suggest that MLK would have thrown his weight behind a political movement hell-bent on justifying sexual appetites and behaviors that he properly identified as “a problem” demanding “a solution” – a “type of feeling” that requires “careful attention” – up to and including “see[ing] a good psychiatrist.”

No, MLK was a Christian minister who both embraced and articulated the biblical “love the sinner, hate the sin” model on homosexuality. Every Christian should follow his lead. After all, it is the lead set by Christ Himself.

Gary Glenn is a member of the Michigan State House. He is also president of the pro-family group AFA Michigan. Of Dr. King’s public position on homosexuality, Glenn noted a glaring, if not utterly twisted, irony: “If homosexual activists had been holding awards ceremonies back in 1958,” wrote Glenn, “they would have labeled Dr. Martin Luther King Jr. a bigot for his published views on homosexual attraction.

“And under today’s Orwellian ‘hate crimes’ laws in Britain and other countries of Europe,” he concluded, “Dr. King would have faced criminal investigation, or worse, for publicly expressing those views.”

Indeed, were he still alive today, and when judged against today’s empty, politically correct standards, Dr. Martin Luther King Jr. – quite literally the “King” of civil rights – would be perpetually smeared as a “bigot,” “hater” and “homophobe” by the ever-“tolerant” left.

The polls are unequivocal. The vast majority of African-Americans resent the left’s comparison of sexual sin to the color of their skin. They understandably find such dishonest parallels both repugnant and highly offensive.

And well they should.

The left has hijacked MLK’s dream. For decades now, this pleasure-based, sex-centric political movement – delineated by deviant sexual appetites and behaviors – has ridden his coattails. They’ve dared to equate demands for celebration of bad behavior to Christian notions of racial equality. They’ve perverted the genuine civil rights movement to fit their own disingenuous designs.

It’s disgusting and it needs to stop.

Still, in the years since his death, Alveda has poignantly articulated how, arguably, based upon his published position on homosexuality, Dr. King might feel about “LGBT” activists’ misappropriation of his Christian legacy for their counter-Christian purposes.

“To equate homosexuality with race is to give a death sentence to civil rights,” said Alveda in 1997. “No one is enslaving homosexuals … or making them sit in the back of the bus.”

And in 2012, Alveda publicly chastised the NAACP for abandoning its founders and constituents, saying, “Neither my great-grandfather, an NAACP founder, my grandfather Dr. Martin Luther King Sr., an NAACP leader, my father, Rev. A. D. Williams King, nor my uncle Dr. Martin Luther King Jr. embraced the homosexual agenda that the current NAACP is attempting to label as a civil rights agenda. …”

Indeed, it is high time that all supporters, from all races, of the historical civil rights movement stand together and demand that “progressive” propagandists stop misusing and abusing the language of genuine civil rights to propagate self-interested moral wrongs.

It’s time for the left to begin honoring the true beliefs, work, life and legacy of the Rev. Martin Luther King Jr.

Reprinted with permission from BarbWire.