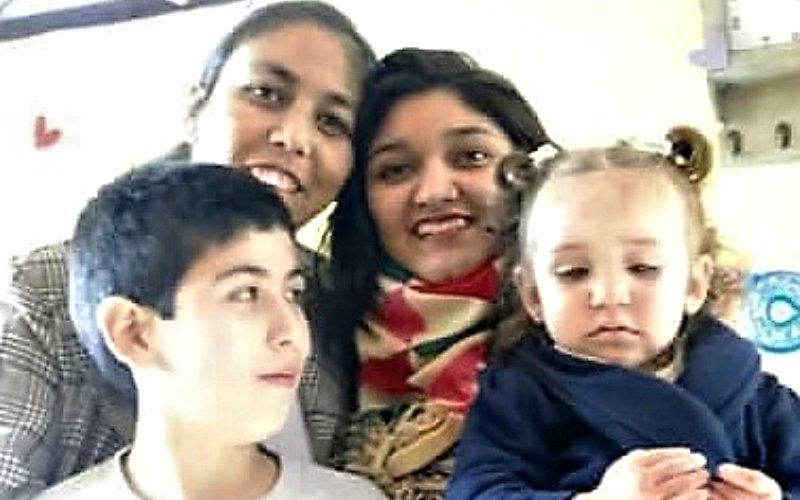 December 20, 2016 (Savethe1) — I was very happy until I met him. We had a relationship of more than two years in which I ended up being forced to endure everything he could think of, until I was pregnant with our first child. He and I each had children from previous relationships, so I just knew when I was pregnant. He began to insult me ​​and abuse me even more – until I lost my first baby. It's a pain that hurts even until today – more so when he started yelling at me in the streets that I had killed my baby.

We had stopped living together and I had ended the relationship, but he kept going to bother me at my house, stalking me. I had reported this situation to the police and in court, but nothing happened. The court refused to grant me a restraining order. As much as I called the police, they just told me they did not have a restraining order to be able to arrest him.

I remember one day, I did not have money for me and my son for transportation, so we walked from school to the house, which was very far and we arrived exhausted. We went to bed that night and forgot to put chains on the gates of my house – a situation that he used to get into my house.

Ladies, I particularly want all of you to know that my child is a blessing – MY blessing! I will ask forgiveness to the last day of my life merely because I even thought for a moment about aborting my daughter.

He knew all of  our habits. We would always drink water at midnight and that day was no exception. My ex-husband put a powder in our waters, which was confirmed by testing weeks later. With both of us drugged, he did what he wanted to me. He raped me, and the result of that was that I became pregnant.

I could not believe I was pregnant! I had no partner and I knew that I had not been with anyone. But the strange thing was that my ex-husband had stopped stalking me and had disappeared for those three weeks.

But the day after he drugged and raped me, my son and I had felt very strange. We went to the emergency room and we took some blood tests. It took three weeks for those results to come back.

I began to think about what could have happened, and I remembered that a neighbor had a surveillance camera at home, so we reviewed the recordings from the night my son and I were drugged, and we observed my ex-husband entering my house, because it was the night we had not chained it. He still had only the key to the gate and door of my house, which he would not return to me. So he watched for us to slip up by not using the chain, and he entered my home where he drugged and raped me.

I cannot say enough how much I wanted to die at the time! I felt dirty. I felt that everyone looked at me with disgust – that was the worst. So I sought help, and the first thing said to me was: “Abort! How much are you going to suffer when you look at that rapist’s baby, and your memories come to your mind with all of the trauma?”

Really, I got to thinking, and I then became determined to kill that baby — until I reached out to my oldest daughter. She took my arms and angrily told me, “Mom, how are you going to kill that baby you carry in your womb?! That baby is as much a victim as you are! She did not ask to come into the world. You always dreamed of having three children and, anyway, this will be your third child. Did you forget everything you suffered in miscarrying your child and now you want to kill this baby who is a victim just like you?”

Those words touched me to the depths of my being. She was right – that baby was a victim of my rapist. The trauma of my rape was already a great weight, along with what I endured during the last period of the relationship we had. He was such an animal. Just the thought of him caused me chills.

When he found out I was pregnant, I was already four months along. He came to my house, he said sorry, and said he was there with the intention to talk like two adults. He is a former Marine, and was a scuba diver for 25 years. He knew how to act professional and calm when he wanted to.

We began talking very well when, suddenly, I felt bad.  I was vulnerable – a single mom, pregnant out of wedlock, exhausted, needing financial help. He, very friendly, was telling me he would stay on the first floor in case I needed help, and I succumbed. But at 4:00 in the morning, I got up to the bathroom and he immediately started insulting me. Hearing me cry, my nine year old son woke up, and when I turned toward my son, my son yelled at me: “Mom, watch out!” My ex-husband struck me hard. I ran down the stairs, clutching my son and we stood in the kitchen. I hugged my son, as I held a knife in my hand to keep my abuser away.

I called the police who told me they were on their way.  ut an hour went by and I again called the police because he continued to threaten me and screamed more and more. The policeman who answered listened on the phone and could hear how I screamed and could hear him threatening to keep beating me. I told the policeman I was four months pregnant and with a child of nine years right there with me, holding a knife in my hand to try to protect us.

The policeman screamed and I remember as if it were today trying to calm down the policeman. He called on the other line to get other officers to my home, and in five minutes, they were there with three vans and two police cars. A contingent of officers got out and had to break the window of my house to get in and rescue us. They stayed with me, giving me police protection, until we were all before the Family Court. At last, my ex-husband was given a restraining order – which he never respected.

I spent the remainder of my pregnancy stressed, anxious, frightened and suspicious of everyone – until my daughter was born. The doctor performed a Caesarean section on me early. I named her Mailen, which means “strong woman” because this is the bond we have.

Once she was born, I just wanted to leave that place and return to my home town in Chile and surround myself with the love of my family, getting away from any further harm and abuse.

Now I see my daughter who is four years and eight months old, and I ask forgiveness for ever thinking of aborting her! But such is the pressure, when you ask those who are supposed to help. You doubt your own ability to love. But if it were not for my older daughter who is now 24-years-old, my four-year-old would not exist today. You can survive with a child of the most aberrant act that is the worst violation – a rape. Always find angels in your life who give you support – those who do not offer you “solutions” which are even more problematic.

Ladies, I particularly want all of you to know that my child is a blessing – MY blessing! I will ask forgiveness to the last day of my life merely because I even thought for a moment about aborting my daughter.

Monica from Chile is a mother of three and now a blogger for Save The 1.  This story has been translated from Save the 1's Spanish blog, Salvar El 1. Reprinted with permission from Save the 1.