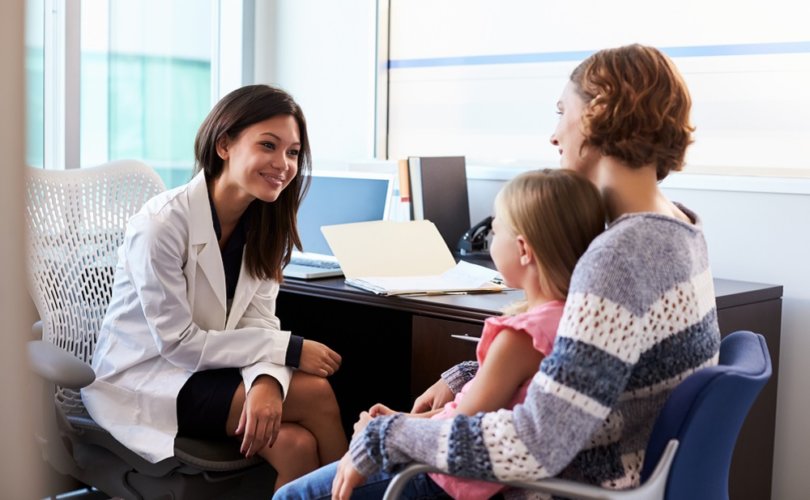 February 18, 2021 (The American Mind) — Hard to believe, but I have a kid approaching driving age. He’s a wonderful boy, in every way. Devout, intelligent, and obsessed with basketball and video games, says his prayers every night before bed. Always reminds me to do penance on Fridays if I forget what day it is and eat meat (what day is this?). Anyway, the Catholic formation we attempted, albeit imperfectly, to impose on him took. It blossomed.

Our son is always dressed for sports practice. He asked for a new weight bench and plates for Christmas. He spent all of lockdown working out, just to make himself into a better basketball player. He measures himself every day and prays for more height. He is obviously, and very apparently, comfortable with all aspects of boyhood.

When it comes to his gender identity, the science is not only settled, but set in stone. You would have to be an imbecile not to see this instantly.

The Doctor Will Seize You Now

It started out as a normal annual checkup, until the pediatrician asked me to leave the room. I didn’t understand at first. “Why?” I asked. “There are some questions I need to ask him without you here.” “Like what?” “Oh, you know, about drugs and smoking.” I stared at her, my mind racing. I realized that if I refused, other issues would be raised. Red flags would be added to the chart. Why wouldn’t I want him to talk to a doctor? Was I hiding something? Did he have secrets I wanted kept secret? “Do I have to leave?” I asked, still stunned. “Yes, I need to ask him these things.” She stared at me not smiling. My longtime doctor who had always been attentive and kind, was suddenly swinging iron keys to my gulag cell while punching the number to Child Protective Services on her phone.

Reader, I left. I lingered outside the door for a minute until a nurse ushered me into an empty storage room to wait, where I couldn’t eavesdrop.

A few minutes later, the doctor slinked out and waved goodbye without a word. On the way to the car, the boy told me what happened. “She talked to me about drugs and alcohol. And she told me when I have sex to use a condom.”

And finally, the kicker: “Then she asked me if I was comfortable with my gender.”

He thought the gender question was absurd and funny. But he was outraged about the condom question. “Mom, she told me to use birth control. Until I’m twenty-five! I’d be committing a mortal sin.” He’s so good. I don’t deserve him. I got angrier and angrier as we drove home. Here was this doctor my son had seen in person a total of five times in his life probing his most intimate secrets. Does the white coat magically melt away kids’ stranger danger and cause them to open up to middle-aged harridans holding clipboards? Guys, they really do want to separate you from your children and dictate their own agenda to them! It’s not just theoretical anymore. This time it’s personal.

I realized too late that I don’t know anything about our doctor, I don’t know her beliefs or her politics, because it never occurred to me that a pediatrician visit would become political.

How dare she decide to give a child an impromptu sex ed lesson without his parent’s permission. Would she recommend condoms to a young Muslim boy? Would she ask a Hasidic boy if he was comfortable with his gender? Condoms and premarital sex are literally against the Catholic religion. I realize many people think those edicts are dumb. Most people laugh at them and think we’re idiots to presume our children are actually chaste. “Kids are going to do it no matter what you say, you dumb religious fanatic.” Well guess what? Any rules that can help a child avoid catastrophic psychic damage are excellent rules and they work.

Enjoy your daughter’s chronic chlamydia, years of heartbreak, and icing off all those genital warts before prom! I’ll be over here dandling my first grandchild on my knee in ten years.

Isn’t a pediatrician’s entire mission in life to keep kids healthy?  Do these nutty MDs really think it would be good and healthy for a ninth grader to be having sex? With other ninth graders? What about with eighth graders? Is an active sex life something they recommend for children, along with eating vegetables and using a car seat and wearing sunscreen?

— Article continues below Petition —
Boycott American Girl: Tell Mattel to STOP pushing a lesbian storyline on children!
Show Petition Text
2329 have signed the petition.
Let's get to 2500!
Thank you for signing this petition!
Add your signature:
Show Petition Text

Call me old-fashioned but giving a child hot tips on how to make the most of their sex life—and doing it in a room alone with the kid after kicking the parent out—sounds like grooming.

A Harvard gender studies professor born before 1980 would insist that our doctor was correct not to assume my son was happy as a boy. To these starched shirts, stereotyping children based on superficial things like playing basketball is wrong, since girls like sports too. According to this type of ancient progressive, assuming that my son is male because of activities he enjoys, or his favorite color, is sexism.

But those were last week’s woke progressives, Grandpx! This week, the best way to diagnose transgenderism is to take a cursory glance at how a kid acts on a playground and boom, vee cut off your johnson!

This video illustrates this dangerous stupidity. At around 1:40, a man dressed like a woman tells his five-year-old daughter that she is actually a boy because she likes to run around and not sit still “like a girl.” He informs the little girl, who is visibly uncomfortable around her creepy father “that’s called being transgender.”

Oh, you’re a girl who likes running and being loud? You’re a boy now. You’re a boy who likes playing quietly with stuffed animals? Your new name is Justine, Justin. You like basketball and worship Steph Curry? You’re obviously a boy.

Our pediatrician was still using the more nuanced, third-wave-feminist method of digging deep into a child’s secret identity. But the 2021 trans detectives have now lowered the threshold. They’re casting a much wider net, with the obvious goal of entrapping more children. The more trans children generated by their machine, the more clout, influence, power, and fame accumulates to the trans lobby. But I suspect that the true reason they want to make your kids trans is because it somehow eases their psychic pain. They’re like vampires hunting and biting children, so they can have playthings for all eternity.

No matter what, they are coming for the kids. We had the doors locked, the windows battened down, the chimney flue sealed shut, but the brainworms still got inside the house.

Fortunately there is a vaccine to the diseases inflicted on kids by a depraved culture and by their doctors. It’s painless, and there are no adverse side effects. Faith in God is the only thing that can stop them, I’m afraid. It’s corny, I know, but there is no other way, and it still might not be 100% effective. You can only fight great evil with something powerful enough to counter it.

My son’s health was protected by this invisible and mighty force field. Parents, activate your force fields immediately, before it’s too late.

Published with permission from The American Mind.