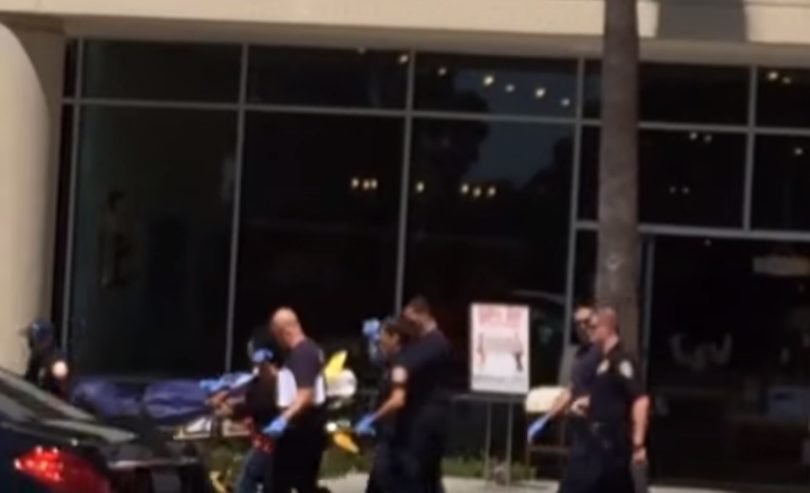 San Diego, CA, September 15, 2015 (OperationRescue) — When an ambulance running with lights and sirens screamed onto Miramar Road in San Diego carrying an injured abortion patient, it was the second known woman that abortionist Robert Santella, 71, sent to the emergency room this year.

The incident, which took place on September 5, 2015, was video recorded by local pro-life activist Joan Pernicano.

According to Pernicano, from her vantage point the abortion-related emergency appeared to be very serious. She could hear an upset woman she believed was the mother of the injured woman yelling as the patient was loaded into an ambulance and transported to Scripps Trauma Center for emergency treatment.

Later, Pernicano was put in touch with the patient’s mother and learned that it was she that called 911 when the abortionist and his staff would not. The mother had been angry because Santella refused to let her see her daughter even though her daughter was calling for her in obvious distress.

“The mother did not want her daughter to have the abortion and tried to talk her out of it. She had a premonition that something was going to happen so that’s why she accompanied her,” Pernicano told Operation Rescue. “No doubt the daughter would have bled to death if her mother hadn’t been there and called 911.”

The patient was hospitalized for eight days. She received a hysterectomy and suffered an infection.

“Dr. Santella had the nerve to show up at the hospital the next day and tell the staff that he was her doctor. When the daughter saw him she called security to have him removed from her room!” said Pernicano.

When sidewalk counselors arrived for their usual shifts outside FPA the following Saturday, September 12, they found that the abortion clinic was closed for the day. According to an e-mail from a local pro-life group, the clinic staff “only do surgical abortions on Saturdays, and this was the first non-holiday Saturday they have been closed since October 19, 2013.”

“Clinic closures represent lost income for the abortionist and the abortion business owner,” said Troy Newman, President of Operation Rescue. “It usually takes something pretty serious for an abortion mill to shut down on its only surgical abortion day of the week. Operation Rescue staff is currently investigating this situation.”

Santella has worked as an abortionist for decades for Family Planning Associates in San Diego. After being kicked out of two previous locations in La Mesa and Hillcrest, FPA finally ended up in an unusual space on the second-floor in the heart of a furniture mall with no other medical offices in sight.

“The location and the fact that Santella has competency issues documented by the California Medical Board raises questions about the safety of women in this high-volume abortion mill,” said Newman. “Add to that the fact that California lacks even the most basic of laws protecting women from shoddy abortion providers like Santella, and we have conditions where women are placed in grave danger whenever they walk into his facility.”

Earlier this year, another of Santella’s patients was hospitalized with abortion-related injuries.

On January 17, a woman walked past sidewalk counselors and into the abortion facility — ignoring their pleas and offers of help — only to be rushed away by ambulance just an hour later.

But these instances are certainly not Santella’s only misadventures.

In 1983, the California Medical Board suspended Santella’s medical license for 60 days and placed him on probation for five years after it found him guilty of gross negligence and incompetence in the treatment of three patients.

One case involved a botched hysterectomy that had been “counter-indicated” in the first place. His patient nearly bled to death while he delayed attending her while he stopped by the bank.

He admitted another patient to a hospital and failed to check on her for over 24 hours while she suffered from a raging infection that went untreated during that time.

Santella failed to provide adequate care for a pregnant patient who suffered pre-eclampsia at full term and later tragically delivered a stillborn daughter due to his negligence.

In 2000, Santella was once again subject to Board discipline for “unprofessional conduct” after he admitted that he “failed to maintain adequate records” related to three patients.

Santella gave one woman a vaginal hysterectomy when an abdominal procedure should have been performed. He also failed to perform needed tests and make appropriate referrals for two other women. None of Santella’s medical records for these women, which were needed by other physicians, were legible.

Santella was ordered to serve four years of probation and take a number of classes, including a course in ethics.

“Traditional discipline over last three decades has failed to improve Santella’s shoddy practices,” said Newman. “Now in his seventies, as he ages, it seems that ambulances are being seen more frequently. If Santella won’t retire, the medical board should revoke his medical license and force him into retirement for the sake of public safety!”