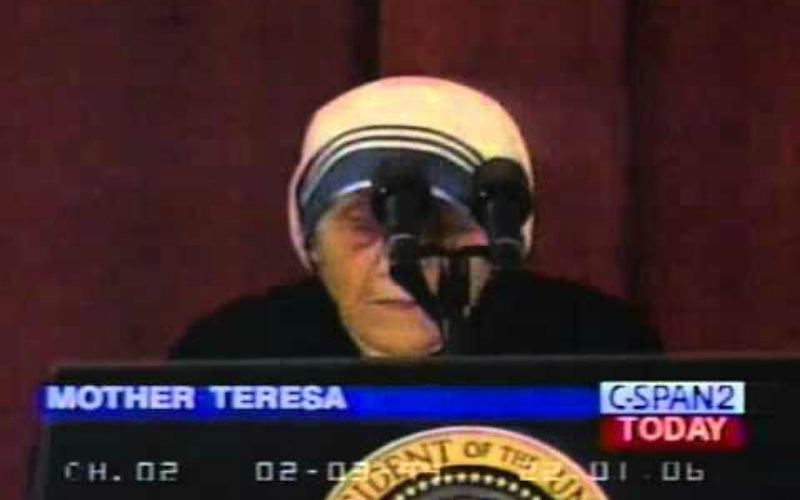 Editor’s note. The Vatican confirmed that Blessed Mother Teresa of Calcutta will be canonized in Rome on Sunday, September 4. I constantly remind myself that every day our movement adds new pro-lifers, many of whom are young. They may not know what a great–GREAT–champion Mother Teresa was of unborn children. The following ran in a slightly different form February 5, 2010. The setting was the National Prayer Breakfast. Hillary Clinton was then Secretary of State.

March 22, 2016 (NationalRighttoLifeNews) — President Obama, as has his predecessors, delivered a prepared speech. But, to be honest, I found the remarks of his fellow pro-abortionist, Secretary of State Hillary Clinton on the same dais, much more intriguing.

Judging by what Clinton said today and previously, she appears to have been genuinely moved by her meeting with Mother Teresa. In 1994 Mother Teresa delivered a no-holds-barred pro-life speech at the National Prayer Breakfast in front of Clinton, her equally pro-abortion husband, then-President Bill Clinton, and Al and Tipper Gore.

Hillary Clinton talked about being summoned afterwards by Mother Teresa and working with her to establish the Mother Teresa Home for Infant Children. It takes nothing away from what Hillary Clinton may have contributed to this noble project to remember what Mother Teresa said to the many power brokers assembled at the Hilton Hotel 16 years ago.

But I feel that the greatest destroyer of peace today is abortion, because it is a war against the child, a direct killing of the innocent child, murder by the mother herself.

And if we accept that a mother can kill even her own child, how can we tell other people not to kill one another? How do we persuade a woman not to have an abortion? As always, we must persuade her with love and we remind ourselves that love means to be willing to give until it hurts. Jesus gave even His life to love us. So, the mother who is thinking of abortion, should be helped to love, that is, to give until it hurts her plans, or her free time, to respect the life of her child. The father of that child, whoever he is, must also give until it hurts.

By abortion, the mother does not learn to love, but kills even her own child to solve her problems.

And, by abortion, the father is told that he does not have to take any responsibility at all for the child he has brought into the world. That father is likely to put other women into the same trouble. So abortion just leads to more abortion.

Any country that accepts abortion is not teaching its people to love, but to use any violence to get what they want. This is why the greatest destroyer of love and peace is abortion.

I was not there, but author and Wall Street Journal columnist Peggy Noonan was. Here’s what she later wrote:

Well, silence. Cool deep silence in the cool round cavern for just about 1.3 seconds. And then applause started on the right hand side of the room, and spread, and deepened, and now the room was swept with people applauding, and they would not stop for what I believe was five or six minutes. As they clapped they began to stand, in another wave from the right of the room to the center and the left.

But not everyone applauded. The president and first lady, seated within a few feet of Mother Teresa on the dais, were not applauding. Nor were the vice president and Mrs. Gore. They looked like seated statues at Madame Tussaud’s. They glistened in the lights and moved not a muscle, looking at the speaker in a determinedly semi-pleasant way.

I claim no insight into Hillary Clinton’s heart or soul. But as she made clear yesterday she takes her Methodist faith seriously, especially John Wesley’s famous admonition to

Secretary Clinton quipped, “That’s a tall order,” followed by (alas), “And of course, one of the interpretive problems with it is, who defines good?”

I thought of that “what is truth?”-esque statement as I read the remainder of her speech, especially the part where she observes, “All religions have their version of the Golden Rule and direct us to love our neighbor and welcome the stranger and visit the prisoner.”

I would never be so foolish as to rank Jesus’ parables. I would only say that the parable of the Good Samaritan is my favorite, the one that has taught me the most.

Maybe everybody else but me already realized this, but it was not until a few years ago that I really got a handle on a hugely important truth. Jesus never responds to the expert in the law’s question, “And who is my neighbor?”

Instead, Jesus turns the question back on him–and back on you and I. “Which of these three do you think was a neighbor to the man who fell into the hands of robbers?”

The question was not whether the man beaten by robbers “qualified” as his neighbor–someone he had a moral obligation to help – but whether he (and we) takes on that obligation by acting as a neighbor to him.

We can, if we wish, walk around (in this case) the unborn child, pretending that he/she is a stranger and therefore someone we have no obligation to try to protect. We can, like Secretary Clinton, twist ourselves into knots (over abortion) by telling ourselves the question is, “who defines good?”

But if you are, like Clinton, reared from infancy in a community of faith, you cannot choose to act like the priest or the Levite of Jesus’ parable.

You–we–must choose to be the Good Samaritan.