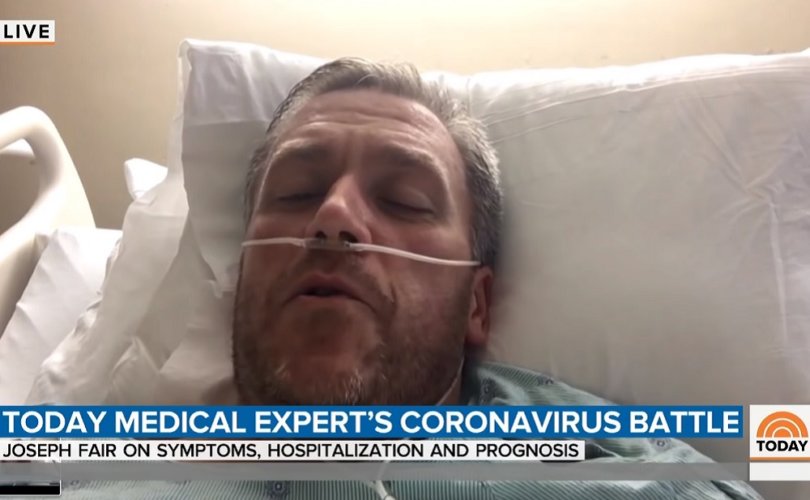 July 14, 2020 (NewsBusters) — For almost two months in his Fourth Watch newsletter, the indispensable Steve Krakauer has been chronicling the strange case of MSNBC/NBC medical and science contributor Joseph Fair, who had claimed in May that he not only contracted the virus, but was hospitalized. Even worse yet, he surmised he contracted it through his eyes on a flight.

But as Krakauer’s reporting showed, it was all a lie as Fair “had at least five negative coronavirus tests” and tested negative for COVID-19 antibodies. MSNBC and NBC predictably kept their heads in the sand despite this breach of journalistic ethics and peddling of bona fide fake news.

NewsBusters found that Fair was a guest 38 times on MSNBC’s weekday evening shows between March 1 and July 10 for a total of 137 minutes with another five minutes covering his now-debunked coronavirus bout. MTP Daily led the way with 12 Fair appearances in this span with the 7:00 p.m. Eastern MSNBC Live in second at ten hits.

In other words, NewsBusters readers, we have on our hands another Brian Williams who happens to have a doctorate and studies virology instead of war games.

Krakauer first alluded to Fair in his May 17 newsletter, noting that NBC had repeatedly featured him “as he recovers from coronavirus” even though “he has tested negative four times,” so it “[s]eems worth monitoring.”

By the time Fair had supposedly contracted COVID-19, he was a network mainstay with MSNBC evening hits totaling 70 minutes and 42 seconds in March, 55 minutes and 29 seconds in April, and a brief, 15-second hit in May cut short by a dropped signal.

Back to Krakauer, he followed up in his June 17 e-mail by relaying Fair’s version of events and how it had struck fear on MSNBC and NBC shows. However, Krakauer noted:

There was something odd, though — that was brought up in the initial report, but has been slowly removed from the reporting on this story that NBC News has done: Dr. Fair has been tested between five and seven times for coronavirus, and has never tested positive.

Krakauer ran through Fair’s publicized reasons for still having caught the virus despite the negative tests, but they made little sense:

Fair went to the hospital May 11, and by May 13 he was appearing on NBC. In those early appearances, NBC reported he had tested negative four or five times, usually as two Abbott tests, a PCR test and a Biofire test. Fair would later tweet that he had “4 neg Abbott, 1 neg biofire, 1 neg in house PCR, 1 borderline pos CRISPR test” (which appear to be 7 tests).

His on-air explanation for the negative tests were twofold. First, he said the Abbott tests, and all tests, are unreliable, with as much as “50% false negatives” for the Abbott test. While one medical expert I spoke to agreed with that assessment, the expert said it still would be highly unlikely for the same person to have 5-7 false false negatives in a row.

Amusingly, Krakauer wrote that, as he would reiterate in updates, NBC wouldn’t “comment on the record.”

Krakauer, a former CNN producer, kept up with the case and issued updates (of which he had none) on July 1 and 6.

By Thursday, Krakauer had enough and again went into exhaustive detail. Leading off the newsletter, the headline read: “NBC tracked their medical expert’s ‘coronavirus battle’ — but he never had it.”

Beginning with Fair’s delusional June 14 Meet the Press appearance, Krakauer called out moderator Chuck Todd for complicity in hiding from his audience that Fair had no evidence to have tested positive.

Worse yet, other NBCers like Hoda Kotb and Craig Melvin assisted Fair in peddling his spin about all his false tests meaning nothing seeing as how he became sick after flying and was hospitalized.

Catching the virus through your eyes? On a plane? But like most debunked liberal media lies, the damage has already been done.

It should come as no surprise that, after Krakauer did some digging, this wasn’t Fair’s first brush with a Brian Williams–like level of embellishment:

Dr. Fair has a long history as a “virus hunter” and virologist — and seems to have as long a history of getting publicity. On Meet The Press, he described the first week of supposedly having COVID-19 as “the worst I’ve ever felt.” In replying to a Twitter follower this week, he said “It was only the second time I have been hospitalized in my life and I am someone who rarely gets ill.”

But a colleague and fellow TV coronavirus expert, Laurie Garrett, who frequently appears on CNN, tweeted in May that Dr. Fair, “has been in many epidemics, contracted #Ebola in West Africa.” He contracted Ebola?

While I couldn’t find any reference to Fair surviving Ebola, I did find Fair featured in a book about Ebola, “Crisis in the Red Zone,” published just last year. The book describes Fair in 2006 when he was a graduate student, and it describes a time he “got sick” — very sick. “A devout Catholic, Fair asked a priest at the center to give him his final confession and the last rites,” writes author Richard Preston. “‘I think I’m passing,’ Fair whispered.” In the end, Fair took some antibiotics and made a miraculous recovery. But COVID-19 was worse than this experience?

In 2014, Fair was profiled in the Washington Post, under the headline “A virus hunter faces the big one: Ebola.” It began: “Joseph Fair hunts viruses. That’s his thing. The 37-year-old American loves chasing dangerous pathogens, studying them in secure labs or searching for them in jungles where the microbes lurk.” The whole story details Dr. Fair’s work with Ebola — no mention of the supposed near-death experience from 2006, however.

In June, NewsBusters found three Fair hits totaling 10 minutes and 40 seconds on MSNBC evening shows in which he discussed the virus and his faux experience. As for July, there was a lone entry from July 1’s The Last Word in the form of a 30-second soundbite from Today.

Like all breaches of basic journalistic integrity, it’s a yet another reason for Americans to distrust the establishment press and while it’s a chance for such outlets to take action and work to regain trust, we’ve seen for the 33 years that the MRC has been in existence that they rarely take that opportunity.

Methodology: NewsBusters searched Nexis transcripts of available MSNBC programs (MTP Daily at 5:00 p.m. Eastern through the end of The 11th Hour at 12:00 a.m. Eastern), consulted the corresponding recordings, and timed both comments by and questions for Fair.