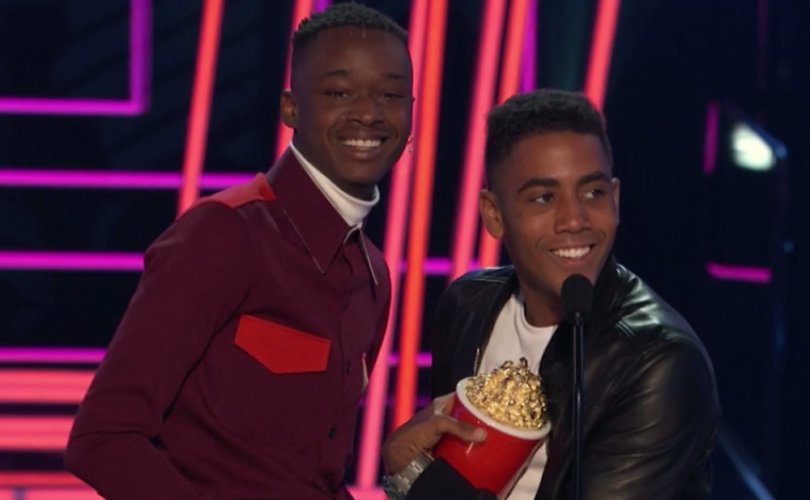 May 8, 2017 (LifeSiteNews) — No shocker here: The MTV Awards last night gave a male homosexual kiss from the “gay”-themed movie “Moonlight” its “Best Kiss” award for 2017.

Liberals like the homosexuality-oriented “news” site BuzzFeed oohed and aahed with approval at the politically correct selection.

“THIS IS IMPORTANT!” shouted Buzzfeed’s Australian correspondent, Jemima Skellay, in a piece with a GIF of the indecent Moonlight movie kiss between Ashton Sanders and Jharrel Jerome.

“It's pretty exciting that a young audience voted for two black men to win Best Kiss, and people are understandably over the moon,” said the Buzzfeed writer using extra-large font, just in case you missed the significance of this momentous event.

In another reminder of the shallowness and depravity of Western pop culture, a hyperventilating Lindsay Marie tweeted:

“me: ugh the mtv movie awards also me: THEY GAVE BEST KISS TO THOSE CUTIES FROM MOONLIGHT THIS IS SO IMPORTANT NOTHING IS MORE IMPORTANT”

We know why the Sexual Left thinks the celebration of All Things Perverse is so earth-shaking — it’s all about breaking down cultural norms and rationalizing people’s bad choices and behaviors. Sin loves company.

But why is this particular Hollywood shoutout to deviance important to parents, families and people of faith who agree with our Creator that sex belongs in a committed, lifelong marriage between a man and a woman?

It’s critically important — like all in-your-face, youth-corrupting homosexual advocacy — because propaganda works. After all, this is MTV, which draws children and young viewers who don’t really get that they’re effectively getting brainwashed on sexual issues, because they’re so rarely exposed to counter-arguments and facts that might “open their mind” to the Truth.

Radical egalitarianism masquerading as nice-sounding “equality” is harmful to society, and especially impressionable children. Even after the height of the AIDS crisis, we are starting to see more carnage of the LGBTQ Revolution, including DNA-denying “transgender” teenagers destroying their developing bodies, with the help of activist professionals and their duped parents. (To be fair to the parents, many self-styled “transgender” kids threaten to commit suicide if they are not allowed to pursue their opposite-sex “identity.”)

We forget all the evil that has been done in the name of “equality” and self-righteous revolutions, most of which have led to tyranny. Way too many young people are unaware that communism, which is predicated on government-imposed “equality,” is the most murderous system of government in history.

What the LGBT Left is doing now is mainstreaming deviance and perversion by gradually getting as much homosexual behavior in front of young people as they can — demanding that we treat it as “equal” to love expressed in normal relationships.

It’s not. Homosexual behavior is unnatural, wrong and against God — something that people in simpler and less profane times used to take for granted. The Western world is built on a foundation of biblical (Judeo-Christian) values. The Apostle Paul’s letter in the Book of Romans (Chapter 1) in the New Testament condemns both male and female homosexual practice (“degrading passions”).

(Misinformed “progressives” deny the latter pertaining to lesbianism and claim that Romans is actually about male prostitution, but to do so they have to twist Scripture into a pretzel. Thank God for righteous Bible teachers like Prof. Robert Gagnon who debunk leftist theological nonsense.)

The Catholic Church’s Catechism, too, condemns homosexual behavior as an “intrinsic moral evil,” and the inclination toward same as “intrinsically disordered,” and an “objective disorder.”

Beyond moral considerations, there are the immense health risks of homosexual and now “transgender” behaviors.

Every week, it seems, brings new evidence of just how “unequal” homosexual sex is to normal sex between man and woman, hopefully united in marriage as God intended. For example, on April 25, the CDC (Centers for Disease Control and Prevention) reported that “Gay and bisexual men accounted for 83 percent (29,418) of the estimated new HIV diagnoses among all males aged 13 and older and 67 percent of the total estimated new diagnoses in the United States.”

So more than nine out every 10 new HIV cases for young men and teenage boys is linked to homosexuality? Is that just a coincidence? Hardly.

A new Mass Resistance book, “The Health Hazards of Homosexuality,” documents the massive medical and psychological research case against homosexual (LGBTQ) lifestyles. I suggest you order a copy, although it certainly is not easy reading.

MTV, Hollywood, and the LGBTQ cheerleaders otherwise known as “the media” don’t like to talk about such “inconvenient truths,” as they continue their rush to glamorize homosexuality in the name of “civil rights” (a huge insult to black Americans). What was it that Christ Jesus said about those who lead children astray? “It would be better for them to be thrown into the sea with a millstone tied around their neck than to cause one of these little ones to stumble” (Luke, 17:2).

We need the ‘ick factor’

Perhaps all this is why God wants people to be naturally repulsed by homosexual behavior. Yes, the “ick factor” — something even pro-“gay” liberals had in spades just a few years ago (and many people who voice politically correct LGBT platitudes still secretly possess today).

Homosexual activists condemn it as socially constructed “stigma,” because to sustain their self-rationalizing delusions they are forced to reject “nature and nature’s God.” But we know better. Who is his right moral mind would equate a husband and wife in a loving kiss with two dudes locking tongues? If you are fine with that, check your soul, because you are not in a good spiritual place.

We must always remember that any man or woman (or child) can turn away from homosexual behavior and LGBTQ lifestyles, as people like David Pickup and Robert Oscar Lopez have. We as Christians are not about condemning people to Hell (God is our fair Judge), but we should guide people to embrace age-old wisdom over societal fads.

Part of that wisdom is the Christian “good news” (gospel) that sinful people can become a “new creation” through the power and grace of Jesus Christ (2 Corinthians 5:17).

God works through nature and true marriage to continue the chain of humanity, one generation after the next. “Heterosexuality” (normalcy) is productive and procreative. Homosexuality is a dead-end. Homosexuals cannot create children by themselves. They must “acquire” them, relying on the overwhelming, heterosexual majority — you know, the men and women whom “gay” militants once maligned as “breeders.”

When will we see EX-“gays” and former “transgenders” like Walt Heyer portrayed sympathetically on the big screen? C’mon, creative Hollywood entrepreneurs, this is one of the “Greatest Stories NEVER Told”! Have at it, if you can muster up the courage.

It may be some time yet, but what America’s pro-life resurgence shows is that someday — after the wreckage of the chaotic LGBTQ agenda is revealed and everyday people see all the high-risk insanity that has been encouraged in the name of that word “equality” — these stories will be told.

And the dam of LGBT-enforced groupthink will come crashing down.

Then we will see some real “diversity,” and healthy and wholesome “inclusion,” for a change.