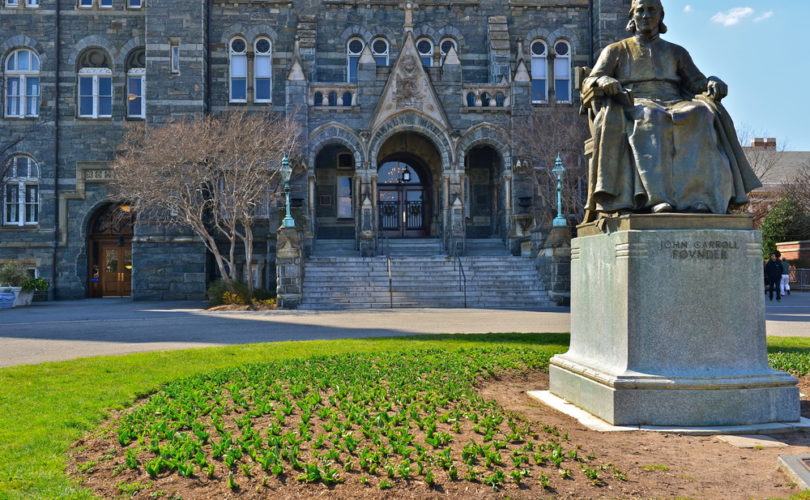 October 18, 2019 (Turning Point Project) — In a recent, insightful First Things piece, Peter Hitchens reiterates the not so well known fact that Hitler was, in many respects, a progressive. And like progressives everywhere, Hitler saw young people as the vanguard of his movement. Thus:

When an opponent declares 'I will not come over to your side' I say calmly 'Your child belongs to us already… What are you? You will pass on. Your descendants, however, now stand in the new camp. In a short time they will know nothing but this new community.'

I thought of this as I was reading a recently released Clarion Project report on “Foreign Influence Ops on U.S. Universities.” Now, college students are not children, but neither were many of the Hitler Youth. Moreover, most college students today seem to enjoy a prolonged adolescence that was not available to young people living in the Germany of the 1930s. Like adolescents everywhere, university students today are still at an impressionable stage. And “impressionable” would also describe a lot of graduate students as well.

Why would foreign donors give large sums of money to already wealthy American colleges? What do they get out of it? Are they doing it simply out of the goodness of their hearts, or are they, as the Clarion report title suggests, carrying out influence operations?

What would we think if historians discovered that Hitler's government had given huge sums of money to select British and American universities in the years leading up to World War II?

It would seem fairly obvious, wouldn't it, that Hitler hoped to bring Anglo-American youth over to his side? But why, then, aren't we disturbed to discover that countries like Saudi Arabia and Qatar are donating vast quantities of cash to dozens of prestigious American universities?

Well, perhaps because we didn't know. I've been familiar for a long time with the large gifts given to select American universities by Prince Alwaleed bin Talal and other wealthy Arabs. But it wasn't until I read the Clarion report that I became aware of the full extent of foreign funding (although Clarion warns that what it's uncovered is just the tip of the iceberg.)

With all the talk of Russian interference in our elections you might think that Russia would top the list of would-be influencers, but the United Arab Emirates donates more than twice as much as Russia, and Saudi Arabia and Qatar contribute far more. China, as you might expect, is near the top of the list, but tiny Qatar donates twice as much as China.

Since 2012 Qatar has donated $376 million to Carnegie Mellon University, $351 million to Georgetown, $340 million to Northwestern University. $275 million to Texas A&M, $41 million to Virginia Commonwealth University, and lesser amounts to about two dozen other institutions of, er, higher learning.

Islam, in case you didn't know it, is a proselytizing religion. And among Islamic states, Qatar and Saudi Arabia are, perhaps, the foremost evangelizers. Both promote “Wahhabism” — a puritanical and theocratic version of Islam that, as the Clarion report observes, “inspires Sunni jihadists around the world.” Indeed, the Qatari government is a strong supporter of Hamas and other terrorist groups.

As far as I know, no American university has expressed shock at this rank influence-peddling. Unlike Rudy Giuliani, who turned down $10 million from the Saudis after 9/11, universities don't seem to mind accepting money with strings attached. Except, apparently, if the money comes from the U.S. government, and the strings require that you teach subjects in a balanced way.

Academics everywhere were outraged when the Department of Education threatened to cut funding for a Middle East studies program run by Duke University and the University of North Carolina. The letter from the Education Department cited courses that failed to provide a “balance of perspectives.” According to the letter, “the positive aspects of Islam” were emphasized, but there was no similar attention to the “positive aspects of Christianity, Judaism or any other religion or belief system in the Middle East.”

Indeed, the NC-Duke Consortium had sponsored a conference featuring “severe anti-Israeli bias and anti-Semitic rhetoric.” In other words, the consortium was using U.S. taxpayer money to present the Qatari point of view on the Middle East.

Academics were incensed that the government wanted to know what they were doing with its money. Jay Smith, a history professor at UNC, said that the official who signed the letter from the Department of Education, “should stay in his lane and allow the experts to determine what constitutes a 'full understanding' of the Middle East.”

This might seem like a fairly risky response to give to a large government bureaucracy. But the reason that Mid-East studies programs can say “we don't need your stinkin' money” to the U.S. is because there's plenty more stinkin' money available from Middle East governments to fill the gap. The amount in question was a mere $235 thousand, which in Qatar would just about cover the cost of a week-end shopping trip to London.

Henry Reichman, of the American Association of University Professors, warned that the threat to withdraw funds “could have a chilling effect.” But the Saudi-Qatar money already seems to have had a chilling effect on American universities. Else why would pro-Israel speakers be so seldom invited to speak on American campuses, while anti-Semitic speakers are given free rein? Why would history texts for students tell them that “Jihad actually means 'striving in the way of the Lord' to achieve personal betterment…”? And why would scholarly books keep insisting that the history of Islam was one long Golden Age of tolerance, scientific advancement, and social harmony?

During the centuries-long Islamic rule of Spain, Christians were treated as a subjugated people. They were considered inferior to Muslims and were made to feel their inferiority in a hundred different ways. Yet contemporary historians portray them as living happy and contented lives under the beneficent rule of their enlightened Muslim masters — in much the same way that earlier American writers portrayed black slaves as happy beneficiaries of their master's kindly solicitude.

It's ironic that academics are worried about the chilling effect that the withdrawal of a relatively small sum by the Education Department might have. When it comes to freedom of speech, the average university has already entered an ice age. There is far more freedom of expression in a hair styling salon than in most college classrooms.

Fernandez-Morera says that academics who research and teach about Islam and the Middle East have been compromised by “stakeholder” incentives. They have a financial interest in keeping certain narratives alive. But the chilling effect is not confined to the campus. It reaches out to affect the whole society. What's taught at the university trickles down to high schools and elementary schools, and sometimes it trickles down rather quickly. Don't be surprised if one of your child's homework assignments requires him to memorize and recite the shahada.

The universities also have an effect on government policies. They are the go-to places to find out what the experts are saying on a variety of issues. That may be why so much Arab money flows into Washington DC area universities. Saudi Arabia and the UAE contribute, respectively, $59 million and $5 million to George Mason University, and $75 million and $4 million, respectively, to George Washington University. Meanwhile, Georgetown University has received $6 million from Saudi Arabia, and a whopping $351 million from Qatar. The Saudi money to Georgetown comes on top of a 2005 donation of $20 million from Saudi prince Alwaleed bin Talal to fund the Alwaleed bin-Talal Center for Muslim-Christian Understanding (ACMCU).

But what's so important about Georgetown — other than being located in Washington — that merits so much largesse? Well, two things come to mind. First, the Alwaleed bin-Talal Center is part of the university's prestigious School of Foreign Service, also known as the Walsh School of Foreign Service because it was established by Fr. Edmund A. Walsh, S.J. The Walsh School turns out more diplomats, State Department officials, and other experts on international affairs than any other American school. It is considered to be one of the best schools of its kind in the world. Yet, what if the international affairs experts who shape our foreign policy have been shaped by a Saudi/Qatari perspective on Islam and the Middle East? It's a question worth asking because a foreign relations expert who subscribes to the ACMCU's cockeyed view of Islam is arguably a risk to national security.

The second Georgetown connection is with the United States Conference of Catholic Bishops (USCCB) which is also located in Washington, and which considers the bin Talal Center the go-to place for guidance on Islam. So it seem safe to assume that the USCCB's understanding of Islam is also shaped by the Saudi/Qatari perspective. And that, in turn, means that American Catholics are being seriously misled about the nature of Islam.

Hitler told his opponents “Your child belongs to us already.” Are we coming to the point where well-funded Islamic proselytizers and their collaborators in academia will be able to say the same?

And, of course, it's not just the children who are being influenced, but the whole culture. I said earlier that there's more freedom of expression in a hair styling salon than in a college classroom, but that statement probably ought to be qualified.

Would you really feel free to say anything critical about Islam the next time you get your hair cut? Would you feel free to say anything at all about Islam? Maybe you're upset about all those Christians being massacred in Nigeria. Maybe you're concerned about mistreatment of women and children in the Islamic world. Or maybe you only have a question about the hookah parlor that just opened around the corner. But in all likelihood you'll keep your thoughts to yourself.

Many in our society worry a great deal about global warming, but it may be time to worry instead about the chilling effect that Islamic influence has brought to bear on our freedom of expression.

This article originally appeared in the October 10, 2019 edition of Catholic World Report. It is published here with permission from the Turning Point Project.