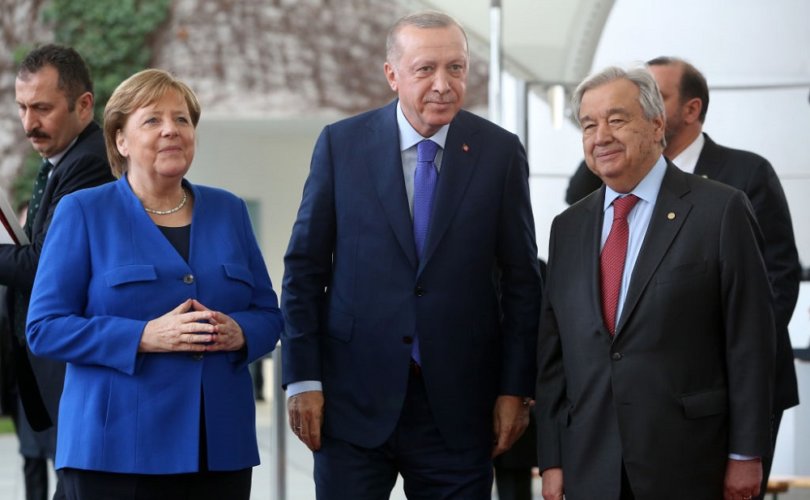 March 9, 2020 (American Thinker) — As Americans remain riveted to the coronavirus and the nauseating vicissitudes of the Democrats’ battle to choose a presidential nominee — a choice now apparently winnowed down to the Marxist or the “moderate” — this writer’s thoughts once again are drawn to events in Europe. The situation now unfolding day by day on the Greek-Turkish border may at first seem of minor concern to America, but in fact it’s a critical part of the overall struggle by patriots on both sides of the Atlantic to preserve Western civilization.

The same forces working here to dissolve American civilization through mass migration and deliberately inculcated cultural self-loathing are busy in Europe pursuing the same goal by identical means. And the same traditional, patriotic segment of the population, guilty of the crime of loving one’s civilization and wanting to preserve it, resists cultural dissolution in both Europe and America. The commonality of the struggle is striking.

European patriots face worse odds. Their governments are more ruthless in condemning patriotism and love of country (who knew that those feelings make one a Nazi?), and Europeans’ history of submission to authority, and consequent ingrained passivity, makes them less inclined to risk social condemnation to save themselves.

Consider the events unfolding on Europe’s eastern border with Islam:

Over the last week to ten days, the Islamist 21st-century Sultan on the Bosporus, Recep Erdoğan, has abrogated Turkey’s 2016 agreement with the European Union, under which the Turks committed to preventing a repetition of the 2015 mass migration of Muslim migrants into Western Europe. During the 2015 fiasco, welcomed by German chancellor Angela Merkel, at least one million “refugees” (read: “economic migrants”) from the Middle East and elsewhere streamed into Germany (hence into all of Europe), following a route that crossed Turkey, the Greek-Turkish border, the Balkans, and Austria. By today, the number of Muslim newcomers in Germany has metastasized, through “family reunification” and continuing migration, to at least two million, with all the vast increases in criminality and sexual assaults, widespread overt loathing of European culture and traditions, and massive social welfare costs, all of which any even a casual student of Islamic history would have predicted.

In return for Turkey’s supposed commitment to prevent a recurrence of the 2015 catastrophe, the E.U.’s appeasement junkies, “led” by Merkel, agreed to provide vast monetary support to the Turkish Islamist regime and diplomatic support to Turkey’s military efforts in Syria and elsewhere. This was a fool’s bargain for Europe from the beginning, as it granted Erdoğan permanent leverage to extort both massive financial contributions to his regime from Western Europe and a mandatory diplomatic cheering section for his expansionist military adventures in the Middle East, especially in Syria.

As usual, enfeebled European elites, having neither the requisite cultural pride nor the military means to defend their fragile borders with Islam, saw little choice: pay off the Turks or endure another invasion by millions of young Muslim men from all over the Middle East and elsewhere — masquerading as “refugees” from the Syrian war and dishonestly assisted in their masquerade by Western Europe’s leftist-dominated mainstream media.

Last Saturday, the futility of a purchased peace with Islamist governments was once again revealed with striking clarity: Recep Erdoğan explicitly canceled the 2016 agreement and announced that his government would no longer halt or hinder the estimated 3.5 million non-Turkish Muslims already living in Turkey, and the hundreds of thousands more migrants who will now enter Turkey across its eastern border, in their westward movement across Turkey into Europe via Greece.

Little more than a week after Erdoğan’s announcement, scenes of chaos and violence just short of war are unfolding on the Greek-Turkish border. In the ancient Greek province of Thrace, where Turkey’s European-side province is separated from Greece by the River Evros, Greek soldiers and police, behind fences and barbed wire, face off against would-be border-crossers numbering, depending on source, anywhere from 13,000 to 30,000 to 75,000. The numbers of would-be invaders and the amount of violence increase daily.

German-language alternative websites report that the mobs at the Greek border have not had to engage in all that much “trekking” across Turkey, that unmarked buses headed west — as many 5–6 per hour — depart from migrant camps in eastern Turkey, and that Erdoğan’s state railroad assists with transporting the invaders to the Greek-E.U.-Turkish border.

Erdoğan’s motives are not merely to rid Turkey of the burden of feeding and housing a large population of non-Turkish migrant Muslims, nor fully explained by his disappointment at the level of financial and diplomatic support he’s succeeded in extorting from Europe since 2016.

Merkel’s feeble and naïve reaction to the 2015 invasion, and the Willkommenskultur (“welcoming culture”) she demanded of the German people (and got from a small but influential part of it), has laid bare the moral confusion, psychological weakness, and atrocious leadership of Germany and Europe. In consequence, Erdoğan, an Islamist to the core, sees his chance for historical Muslim greatness.

After the amazing governmental capitulation and public passivity in Germany during 2015, Erdoğan is smart enough to perceive that now is his chance to dramatically advance through migration what Kara Mustafa failed to achieve in 1683 through direct military invasion: the gradual but relentless Islamization of Europe.

Rocks have been hurled at Greek police and border soldiers by the would-be border-crossers, and the defenders of Greece at times have responded with tear gas. Based on reports coming out of the border area today, as well as photographs and videos viewable at various European and German-language websites, the invading mob looks remarkably similar to the one that strode unhindered into the heart of Europe in 2015: overwhelmingly young, single and male, with a rare smattering of women and small children for window dressing.

As in 2015, the wildly pro-migrant German mainstream press and television “reporters” seek out the few women and children and feature them in tear-drenched reports and oh, so cute kiddie photos, thereby grossly misrepresenting who the migrants are for the dependably ill informed, gullible, fearful, and guilt-ridden German public.

It’s not only Greeks living west of the River Evros in Thrace who are directly in the path of this new wave of invaders. Several Greek Aegean islands, particularly the once beautiful Lesbos, Samos, and Chios, all substantially closer to Turkey than to mainland Greece, have been the destination of numerous migrant-filled boats since the Erdoğan decree. As many as 1,300 new migrants are said to have landed on Lesbos since the Erdoğan diktat. These boats and their occupants are often aided by northern European workers for pro-mass migrant “NGOs,” many based in Germany, staffed by Germans and supported by George Soros.

The situation on Lesbos is particularly acute, as some 20,000 Muslim “refugees” were already being held there in camps before the Erdoğan “let them pass” order to the Turkish army. They had already long been making life miserable for the local Greek villagers and farmers, sallying forth from the camps daily to beg, commit crimes, and inflict damage on local property-owners. One Lesbos farmer reported that scores of his decades-old olive trees had been cut down for firewood by the not particularly grateful migrants.

Although as yet receiving no help from timid E.U. leadership, the Greeks, on Europe’s front line with Islam, as they were 500 years ago, are showing much more mettle and will for civilizational survival than their infinitely richer and more powerful Teutonic northern neighbor. The Greeks, who would be woefully outmatched in any military confrontation with Turkey, have announced that they are defending, and will continue to defend, their border, which, they point out, is the E.U.’s international border, too.

Various E.U. pooh-bahs arrived in Greece on Wednesday, March 4, chief among them famously incompetent former German defense minister and Merkel protégé Ursula von der Leyen. Von der Leyen, having totally neglected Germany’s defense obligations for years, failed up and is now is “E.U. commission president,” whatever that is. On arriving in Greece, Von der Leyen mouthed the usual platitudes about supporting Greece’s efforts to defend its and the E.U.’s borders but arrived with no real military aid and, in the next breath, counterfactually claimed that Turkey is not the enemy of the E.U. If organizing and promoting an invasion of Europe doesn’t make a country an enemy of the E.U., one wonders if anything would.

Meanwhile, at home in Germany, far from besieged Greek border troops and Lesbos farmers trying to protect their olive trees, the usual suspects are again beating the drums of the Merkel-created “Willkommenskultur.” The Green Party, once again, is urging that all comers be enthusiastically taken in. German Greens, never known for rational thought, are apparently unaware of the gross contradiction between their claim that Germany is already grossly overpopulated, on the one hand, and belief that there is no limit to the number of unassimilable third-world immigrants Germany should take in, on the other.

In 2015, Merkel made the first Willkommenskultur slogan famous: “Wir schaffen das,” (“We can do it!”), referring to Germany’s alleged ability to care for and assimilate millions of overwhelmingly young male, European culture–loathing, crime-prone, sexual assault–prone Muslim immigrants.

A new slogan is now making the rounds at German Greens rallies: “Wir haben Platz!” (“We have room!”).

What German Greens and other migration enthusiasts — largely drawn from the wealthier classes — actually mean is that “other people” have “Platz.” Last year, in a famously upscale Hamburg neighborhood riddled with wealthy Green virtue-signaling voters, residents turned out in droves to explain why their neighborhood was singularly unsuitable as a Muslim migrant home. “Wir haben Platz” would more honestly be rendered, “Du hast Platz, ich nicht” (You have room, I don’t.”)

Erdoğan’s effort to gain financial and military advantage for Turkey, and at the same time to advance his deeply held Islamist goal of being remembered as one who nobly advanced Islam’s dream of conquering Europe, are easy to understand. Who can blame him for pursuing his country’s interests and his religion’s age-old goal?

The question is, since the 2015 inundation of Germany and Europe by Muslim economic migrants, have the Europeans — their self-loathing, naïve governments and their passive peoples — learned anything at all about the fundamental incompatibility of Islam and the West? Have the massive increases in crime, sexual attacks, and acts of terror, along with the obvious refusal of great majorities of newly “European” Muslims to integrate with a culture they despise, taught them anything at all?

How the latest attempted Islamic invasion of Europe plays out on the Greek-Turkish border will go a long way to answering those questions.

This article originally appeared at the American Thinker. It is edited and published here with the author’s permission.