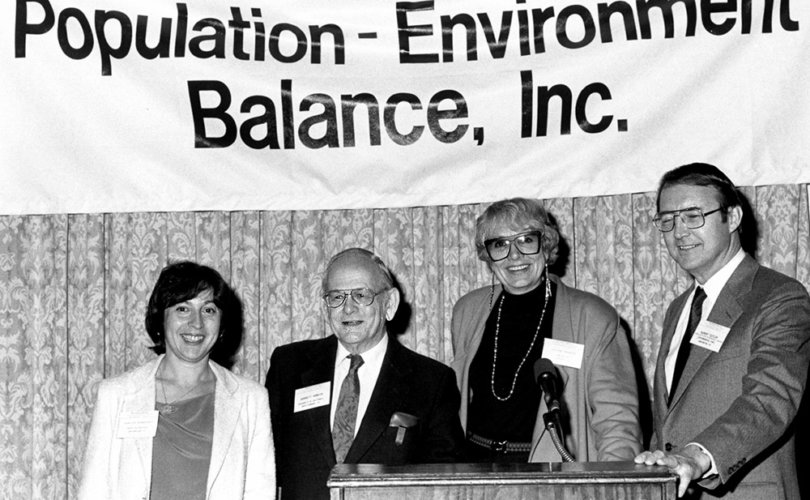 Garrett Hardin (second from left) was a population control advocate.

January 4, 2019 (LifeSiteNews) — Unable to sleep the other night, I began to think back over my life. I reflected on my turbulent youth as a child of the 60s: the men, the drugs and drinking. I came of age in a tumultuous time; everything was in a state of change and upheaval.

I got to thinking about an old college friend and his family. I decided to Google my friend’s father who had an unusual name and was sadly influential in my life.  I found an obituary for the father, Garrett Hardin.

At 18, I was a freshman at the University of California, Santa Cruz, facing an unplanned pregnancy. I could have shared the pregnancy with my parents, who were against abortion and would have helped me parent my child. I turned instead to this college friend and his family.

As I struggled to accept the reality that I was pregnant, the Hardins persuaded me that I could get rid of the pregnancy and then after the procedure I could return to my pre-pregnancy life. That’s exactly what I wanted.

But in 1968 abortion was still illegal. Not to worry. Garrett Hardin had another option that would make my problem go away.

One particular paragraph of Hardin’s obituary hit me especially hard. I was not the only woman he helped get rid of the problem:

“Mr. Hardin and his wife were longtime supporters of Planned Parenthood, and … helped operate an ‘underground railroad’ in which 200 local women went to Mexico seeking abortions.”

I am one of those 200 local women who went to Mexico on that Hardin Underground Railroad of Abortion.

At 18, I really had no idea what I was doing on that journey to Mexico. One of the Hardin family women went with me. We drank the whole two days. I’m surprised they were able to do anything medical given my blood-alcohol level. I’m sure it was through the roof.

For a short time after that trip, life seemed sort of OK. The only problem was that my drinking, drugging and promiscuity all got worse. After two more unplanned pregnancies and two more abortions, I was a mess.

I finally had a child and then got sober. After a number of years floundering around, I returned to my childhood Catholicism. I then found an abortion healing program called Rachel’s Vineyard that began my journey back to peace and serenity.

In Garrett Hardin’s obituary, a friend of his shared:

“Mr. Hardin’s research and writing on reproductive rights ‘were fundamental in getting the state Legislature (California) to pass therapeutic abortion bills in the 1960s.’”

I also learned something else about Hardin. His aggressive advocacy for abortion rights led him inexorably to the promotion of euthanasia.

The first parents of our human family faced the temptation to “become like gods,” and rebel against the providence of their Creator. In their anguish and shame, they learned the painful lesson that some choices do not lead to liberation and freedom but to spiritual and physical death.

This temptation to rebel against God’s absolute providence over our lives, and the lives of the unborn, remains a powerful and deadly temptation that still rages in the hearts of women and men.

The obituary revealed the final chapter in the life of Garrett Hardin. He was a member of the pro-euthanasia Hemlock Society. Faced with illness and disability, Hardin and his wife died in a double suicide.