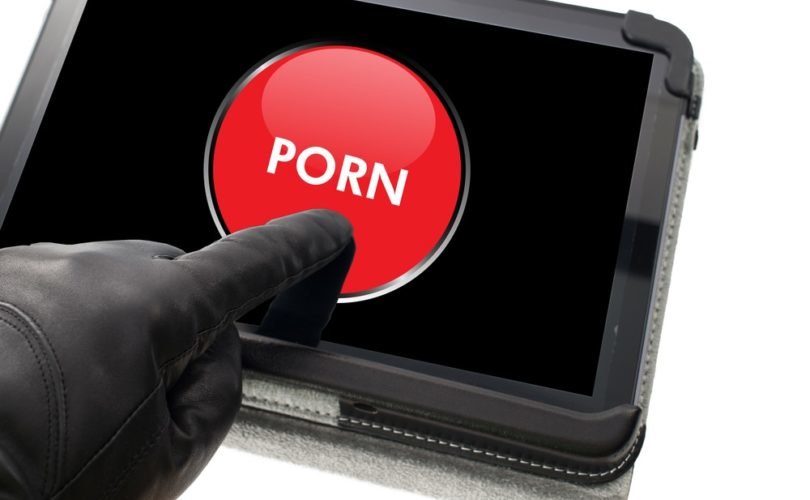 A few weeks ago an article went viral on my Facebook feed entitled “The Day My 10-Year-Old Discovered Hardcore Porn on his iPhone.”  As one Mom after another shared and commented about how frightening and horrible it was and wondered what do we do to prevent it, I commented on several of those shares (perhaps a little smugly and proudly) that WE had installed an excellent filtering program on all of our devices that even filters YouTube.  I most likely left the impression that WE have no worries in this house, that our kids can watch their iPods and kindles, even those annoying Minecraft how to videos on YouTube, and WE don’t have to worry about them seeing filth.

This is no longer a battle friends, it’s an all-out war.  It’s a war we’re fighting for the minds and futures of our children.

So YES we have this supposedly great and awesome filter on all of our devices and we pay about $70 a year for it.   Look, I’ve been on my computer trying to shop for a swimsuit at Lands End and the filter blocked me.  Annoying, yes.  But assuring.  I remember thinking wow….if I can’t even get on here and see the tummy-sucking-miracle-fat-hiding-mawmaw-swimsuits, my boys will NEVER be able to discover Victoria or her Secret.   And I’ve been on YouTube trying to see how to quickly defrost CHICKEN breasts, and it blocked several videos AND ads that probably had nothing to do with fowl or a thawing method.  Again I remember thinking, good.  This is really good.  Nothing to worry about.

My youngest son was visibly shaken as he was getting ready for bed.  I knew something was wrong when I saw he was wearing his flannel pajamas with the mountain bears printed all over them on one of the hottest August nights this month.   He seemed almost disoriented and I asked him if he was sick as he was trying to quickly crawl into bed and pull the covers over his head.   He then reached over to the bedside table, grabbed his little iPod, and tossed it to me saying he doesn’t deserve it anymore because he is bad.  “I’m bad, so bad….I saw bad things.”  My heart started racing and I felt like I had been punched in the gut.  Because I knew where this was going.  Very calmly and quietly I assured him he was not bad and there was nothing in the world he could ever tell me that would make me think he was bad.  “What did you see, sweetheart?” I asked.  After about ten minutes of me coaxing it out of him, with a wobbly still-tiny-smidge-of-baby-left voice he told me he was searching for a word he had heard and he spelled it for me.  T-t-i-s.  (I quickly unscrambled and knew what he meant).  He went on to tell me he searched for this on YouTube (the app is not even on his iPod….he must go through the “filter” app to access it!).   He told me he saw pictures and videos.

My stomach turned.  I ran through all the “How To” files I’d stored away in my mind.  You know those files….situations you’ve thought about as a Mom and how you’d handle…you file them away for another day.  Usually one you hope will never come.   Turns out I didn’t have a file for this.  Because I honestly thought we had done everything on the front end to keep it from happening.

I ran my fingers through his hair and pulled him close and started talking to him from my broken heart.  I asked him if he knew what that word meant before he searched for it.  He said no.  I told him it is a very crude and ugly word for something that is not crude and ugly.  I told him what the proper word is and I asked him if he knew why God made them like that on women?  He said no.  I told him it was the miraculous and wonderful way that God made women able to feed their babies.  I told him how every woman who has those is made to feed a baby, and those women in those pictures and videos are either already someone’s Mommy or they will be one day.  And what God meant for a beautiful purpose is twisted and made into something very wrong and ugly by those pictures and videos.

Don’t trust some computer geek working for a software company to care a flip for or protect your kids.

We continued to talk and then we prayed together and I left him to sleep as I walked back to my room for a sleepless night.  I cried for the ugly, messed up, twisted, and sick world out there that I can’t protect my children from.  I cried for what he had seen that I couldn’t un-see for him.  I cried because I had abdicated MY parenting duties to some stupid computer software that I thought would protect my children.  I cried because I can never get back that bit of innocence he lost way, way too early.  I cried as I went onto YouTube, put in that same search and saw just the thumbnails of what he had to have seen.  I just can’t bring myself to actually click on the videos.  I cried because, when I went in to check on him later, he was curled up with Big Bear in one arm and his little blue and white checked blanket in the other.  He’s still a baby.

I’m mad now.  And I really hope my anger continues to burn because I need it to fuel my diligence.   I need my guard to be up and to stay up.  This is no longer a battle friends, it’s an all-out war.  It’s a war we’re fighting for the minds and futures of our children.  I know there are those who would say I’m being overly dramatic, that I can’t put my children in a bubble, blah blah blah.  I don’t care.  I will do whatever it takes to protect my children until their minds, bodies and emotions are better prepared to grasp, filter, and sort through the warped and ugly parts of our world that are pulling on them.  I will continue to pull back and hold on for dear life.   Don’t do as I did, friends.  Don’t trust some computer geek working for a software company to care a flip for or protect your kids.  Do as I am doing now.  Uninstall any and all browsers or video apps on your kids’ personal devices and set the restrictions where they can’t install apps anymore without asking you first.   Have one central computer in a public area of your home that they may use, with permission, and still with filter software installed.  But remember that’s not the first line of defense in this war.

Julie Ralph blogs at Mommy, Esquire, where this piece was originally published.