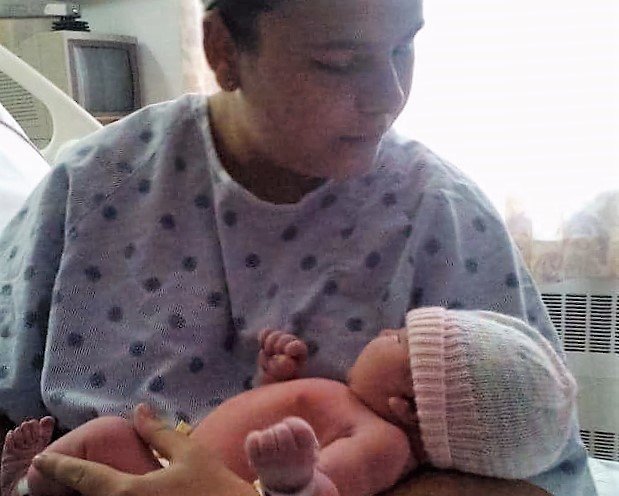 Shalyn with her daughter conceived in rape when she was 19

January 7, 2016 (Savethe1) — I was 19 and living on my own, working as a nanny. An ex-boyfriend of mine who I was still friends with was going to come over to visit, as I had just recently moved into my new apartment. He came in and we visited, and before long he was kissing me and trying to initiate intercourse. I said “NO!” numerous times, and then my “freeze” reaction kicked in.

For four years of my childhood, I was sexually assaulted almost daily by a family member. I told a few different people, but nobody believed me. I realized quickly that it wasn't going to end, so I learned to freeze because it stopped quicker if I pretended it wasn't happening.

So back to the night my ex-boyfriend raped me – I froze, and he took advantage of me. After he left, I cried on my bathroom floor for hours, wishing I had put up more of a physical fight. I didn't report it, because I knew it would be like the abuse of my past – my word against his.

A few weeks later, I realized that I had been having period cramps for a couple of weeks, where normally I would only get them for a day or two before my period. That's when I thought I might be pregnant. I ran to Shoppers Drug Mart and got a test. When it said “yes,” I went back and got another. Of course it said the same thing.

I was fairly close to my boss at the time, so I told her about my pregnancy a week or so later. She told me she didn't want her kids to see me “in that condition,” so if I wanted to keep my job I had to abort – it was my child or hers.

I went to the Pregnancy Resource Centre, and asked the pregnancy counselor if she thought I should get an abortion. She wasn't allowed to give me a direct answer, but she assured me that I was capable of raising my baby, and pointed me in the direction of helpful programs around the city. When she estimated the baby's due date, I knew it was a sign because she was due on my birthday!

I kept her, lost my job, got a new one before I started to show.  When I gave birth to my daughter, I felt scared because she was so small and fragile, but I was so in love, and the emotion only grew from there!

During my pregnancy, I also met the love of my life who is now her Daddy. The only father she has ever known – he is the greatest father. He plans to adopt her once we marry.

My daughter's biological father knows about her, but has chosen not to have any relationship with her, which is best for her and of course, a huge relief for me.

My little girl is now three years old and she is the most beautiful girl in the world! We are (age appropriately) honest with her. She knows that her Daddy didn't make her, but he chose her.

She is not a “rape baby.” She is MY baby. She is the baby of a rape victim, and she is worthy of life. Children like her should not be punished for the crimes of their fathers.

My daughter is truly the rainbow after the storm.

Shalyn McGuin is a Stay at Home mom, a pro-life blogger for Save The 1, and resides in Ontario,  Canada.  She hopes to make a positive difference for babies conceived through rape and their mothers.