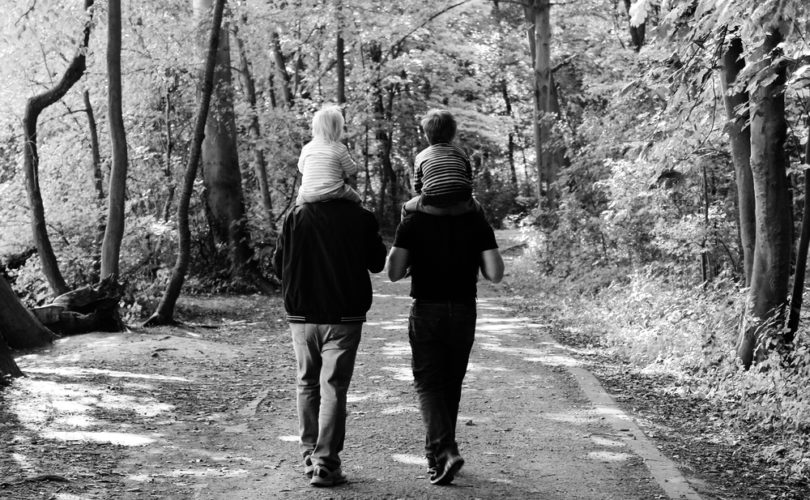 Every time a new state redefines marriage, the news is full of happy stories of gay and lesbian couples and their new families. But behind those big smiles and sunny photographs are other, more painful stories. These are left to secret, dark places. They are suppressed, and those who would tell them are silenced in the name of “marriage equality.”

But I refuse to be silent.

I represent one of those real life stories that are kept in the shadows. I have personally felt the pain and devastation wrought by the propaganda that destroys natural families.

In the fall of 2007, my husband of almost ten years told me that he was gay and that he wanted a divorce. In an instant, the world that I had known and loved—the life we had built together—was shattered.

I tried to convince him to stay, to stick it out and fight to save our marriage. But my voice, my desires, my needs—and those of our two young children—no longer mattered to him. We had become disposable, because he had embraced one tiny word that had become his entire identity. Being gay trumped commitment, vows, responsibility, faith, fatherhood, marriage, friendships, and community. All of this was thrown away for the sake of his new identity.

Try as I might to save our marriage, there was no stopping my husband. Our divorce was not settled in mediation or with lawyers. No, it went all the way to trial. My husband wanted primary custody of our children. His entire case can be summed up in one sentence: “I am gay, and I deserve my rights.” It worked: the judge gave him practically everything he wanted. At one point, he even told my husband, “If you had asked for more, I would have given it to you.”

I truly believe that judge was legislating from the bench, disregarding the facts of our particular case and simply using us—using our children— to help influence future cases. In our society, LGBT citizens are seen as marginalized victims who must be protected at all costs, even if it means stripping rights from others. By ignoring the injustice committed against me and my children, the judge seemed to think that he was correcting a larger injustice.

My husband had left us for his gay lover. They make more money than I do. There are two of them and only one of me. Even so, the judge believed that they were the victims. No matter what I said or did, I didn’t have a chance of saving our children from being bounced around like so many pieces of luggage.

A New Same-Sex Family—Built On the Ruins of Mine

My ex-husband and his partner went on to marry. Their first ceremony took place before our state redefined marriage. After it created same-sex marriage, they chose to have a repeat performance. In both cases, my children were forced—against my will and theirs—to participate. At the second ceremony, which included more than twenty couples, local news stations and papers were there to document the first gay weddings officiated in our state. USA Today did a photo journal shoot on my ex and his partner, my children, and even the grandparents. I was not notified that this was taking place, nor was I given a voice to object to our children being used as props to promote same-sex marriage in the media.

At the time of the first ceremony, the marriage was not recognized by our state, our nation, or our church. And my ex-husband’s new marriage, like the majority of male-male relationships, is an “open,” non-exclusive relationship. This sends a clear message to our children: what you feel trumps all laws, promises, and higher authorities. You can do whatever you want, whenever you want—and it doesn’t matter who you hurt along the way.

After our children’s pictures were publicized, a flood of comments and posts appeared. Commenters exclaimed at how beautiful this gay family was and congratulated my ex-husband and his new partner on the family that they “created.” But there is a significant person missing from those pictures: the mother and abandoned wife. That “gay family” could not exist without me.

There is not one gay family that exists in this world that was created naturally.

Every same-sex family can only exist by manipulating nature. Behind the happy façade of many families headed by same-sex couples, we see relationships that are built from brokenness. They represent covenants broken, love abandoned, and responsibilities crushed. They are built on betrayal, lies, and deep wounds.

This is also true of same-sex couples who use assisted reproductive technologies such as surrogacy or sperm donation to have children. Such processes exploit men and women for their reproductive potential, treat children as products to be bought and sold, and purposely deny children a relationship with one or both of their biological parents. Wholeness and balance cannot be found in such families, because something is always missing. I am missing. But I am real, and I represent hundreds upon thousands of spouses who have been betrayed and rejected.

If my husband had chosen to stay, I know that things wouldn’t have been easy. But that is what marriage is about: making a vow and choosing to live it out, day after day. In sickness and in health, in good times and in bad, spouses must choose to put the other person first, loving them even when it’s hard.

A good marriage doesn’t only depend on sexual desire, which can come and go and is often out of our control. It depends on choosing to love, honor, and be faithful to one person, forsaking all others. It is common for spouses to be attracted to other people—usually of the opposite sex, but sometimes of the same sex. Spouses who value their marriage do not act on those impulses. For those who find themselves attracted to people of the same sex, staying faithful to their opposite-sex spouse isn’t a betrayal of their true identity. Rather, it’s a decision not to let themselves be ruled by their passions. It shows depth and strength of character when such people remain true to their vows, consciously striving to remember, honor, and revive the love they had for their spouses when they first married.

Our two young children were willfully and intentionally thrust into a world of strife and combative beliefs, lifestyles, and values, all in the name of “gay rights.” Their father moved into his new partner’s condo, which is in a complex inhabited by sixteen gay men. One of the men has a 19-year-old male prostitute who comes to service him. Another man, who functions as the father figure of this community, is in his late sixties and has a boyfriend in his twenties. My children are brought to gay parties where they are the only children and where only alcoholic beverages are served. They are taken to transgender baseball games, gay rights fundraisers, and LGBT film festivals.

Both of my children face identity issues, just like other children. Yet there are certain deep and unique problems that they will face as a direct result of my former husband’s actions. My son is now a maturing teen, and he is very interested in girls. But how will he learn how to deal with that interest when he is surrounded by men who seek sexual gratification from other men? How will he learn to treat girls with care and respect when his father has rejected them and devalues them? How will he embrace his developing masculinity without seeing his father live out authentic manhood by treating his wife and family with love, honoring his marriage vows even when it's hard?

My daughter suffers too. She needs a dad who will encourage her to embrace her femininity and beauty, but these qualities are parodied and distorted in her father's world. Her dad wears make-up and sex bondage straps for Halloween. She is often exposed to men dressing as women. The walls in his condo are adorned with large framed pictures of women in provocative positions. What is my little girl to believe about her own femininity and beauty? Her father should be protecting her sexuality. Instead, he is warping it.

Without the guidance of both their mother and their father, how can my children navigate their developing identities and sexuality? I ache to see my children struggle, desperately trying to make sense of their world.

My children and I have suffered great losses because of my former husband’s decision to identify as a gay man and throw away his life with us. Time is revealing the depth of those wounds, but I will not allow them to destroy me and my children. I refuse to lose my faith and hope. I believe so much more passionately in the power of the marriage covenant between one man and one woman today than when I was married. There is another way for those with same-sex attractions. Destruction is not the only option—it cannot be. Our children deserve far better from us.

This type of devastation should never happen to another spouse or child. Please, I plead with you: defend marriage as being between one man and one woman. We must stand for marriage—and for the precious lives that marriage creates.

Janna Darnelle is a mother, writer, and an advocate for upholding marriage between one man and one woman. She mentors others whose families have been impacted by homosexuality.