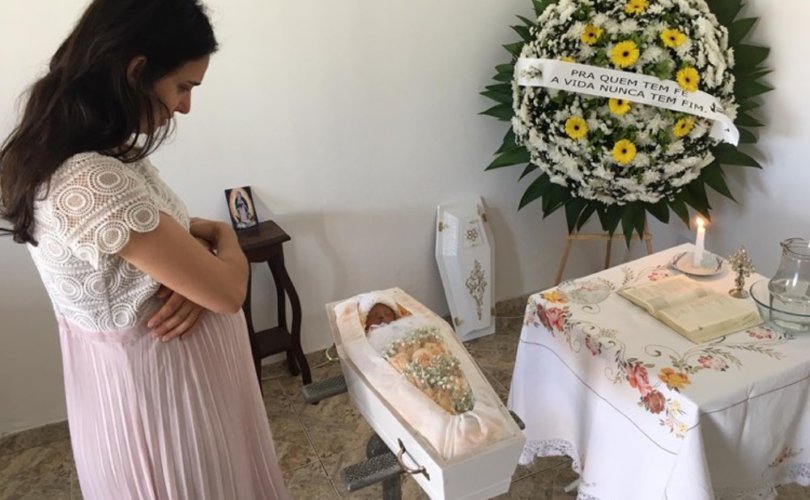 (LifeSiteNews) – John Michael would have been born on December 15, but it just wasn’t to be.

Instead, he was delivered without any sign of life on November 23, his little body having grown for 37 weeks under the loving heart of my wife, Junia.

We found out the day before that his own little heart had stopped beating, his breathing had ceased, and he had left his temporary home for an eternal one.

God created John Michael for a reason, allowing him to have Trisomy 18 and the short life that usually follows.

What consoles me is the fact God knows and cares for our child, that Christ considered John Michael’s soul worth dying for, and that God doesn’t make any mistakes, not least when He sends a precious baby our way.

I don’t know for sure where his soul is now, but my wife and I can hope and pray he is in heaven with his Creator.

Labor, as you well know, is hard enough for any woman, but knowing we wouldn’t meet our baby alive and well meant my wife’s own cross was all the heavier to bear.

I can only marvel at her grace and faith, telling me in the car on the way to the burial how all we can do as parents is offer our children back to God.

She had done this most important task as a mother, loving John Michael from the moment she knew he was with us, and all the time telling God “Thy will be done.”

We cried for days when we found out during the summer that he had Trisomy 18, that we probably wouldn’t get to share all the things that make life precious with him, or see him grow up to take his first steps, or just kick a football with his older brother, Joe.

Seeing John Michael’s lifeless body be delivered several months later and placed in my arms on the ward was to feel utterly helpless as a father, not able to do a thing to bring him back.

The hardest part, however, was kissing him goodbye, closing his coffin and knowing I wouldn’t see him again in this life. I’m so glad we were able to give him a good Catholic funeral.

Why am I telling you all this today, during Christmas of all seasons? Partly because I want to honor John Michael’s life and my wife’s courage, but also because this is the season in which we all welcome a Child who was born to die.

This Christmas we can truly rejoice that Christ’s coming means death no longer has the last word -– His life, death, and Resurrection give us the chance of eternal life in heaven.

The gift of myrrh, which was used to embalm bodies in the ancient world, was brought to Bethlehem and signified that the newborn Jesus would eventually die and be placed in the arms of His Mother again.

The gifts of gold for a King and incense for God which were also brought to the manger might seem more fitting in that hallowed place, but myrrh was a prophetic sign that Christ, even though He is the King of Kings and God made man, would experience what we all must go through, whether born or unborn.

And as for what I learned from my wife’s pure love for John Michael? It’s that even the most harrowing, painful, helpless moments can be made beautiful when we invite Jesus into them.

He knows what it is to suffer, die, and say “Thy will be done.” Junia’s great love is ultimately just a taste of what John Michael means to God.

Hold your loved ones close this Christmas and invite God in.