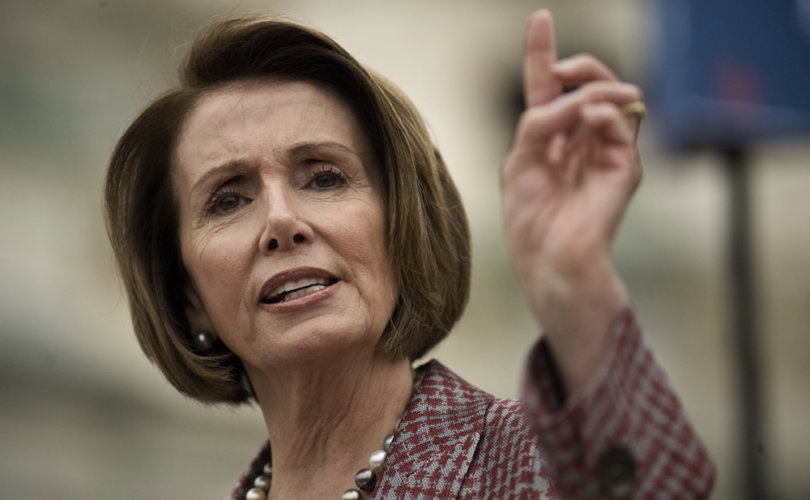 July 17, 2019 (American Thinker) — Presumably, a nation's top lawmaker would care a bit about rule of law.

She's out advising people whose very first act in America was to break the law — how to avoid any consequences for that act, not at the entry point, not during the lengthy court process, but well after the courts have processed every claim and appeal, and still found them deportable.

“An ICE deportation warrant is not the same as a search warrant. If that is the only document ICE brings to a home raid, agents do not have the legal right to enter a home. If ICE agents don't have a warrant signed by a judge, a person may refuse to open the door and let them in,” said Pelosi, reading from prepared remarks at her weekly press conference.

During a closed-door meeting on Thursday, Pelosi urged members of her caucus to help disseminate the party's “know your rights” campaign to illegal immigrants [sic] in their districts who may be targeted during the raids, Politico reported. She also told her colleagues that she plans to appeal to religious leaders to speak out against the planned raids.

After the meeting, Pelosi told reporters that she believed opposition from religious leaders played a significant role in Trump's decision to call off a sweeping ICE raid in early June.

“They were very concerned that this goes too far because these raids were not what they signed up for with President Trump. And I think their calls to the president made a difference,” Pelosi said. “Hopefully the president will think again about it or these groups will weigh in once again.”

“Families belong together,” she added. “Every person in America has rights.”

So it's OK to break into America's house, and it's OK to thumb one's nose at America's judges in the aftermath, but lawmen from the executive branch led by a democratically elected president mustn't dare break into the house of someone who has violated those laws, and been found guilty by every court he's come in contact with? That's a law that can't be violated? That's an exception? It's not even immigration law she's advising them on; it's the last-ditch laws of avoidance that sleazy lawyers give to bad clients who don't have the law on their side in any substantial way. Headed to jail? Halt the lawmen with technicalities, and try to thwart jail time with last-ditch process obstructions. Laws like that make a mockery of rule of law.

Why do we even bother with immigration courts with this sort of junk law going on?

And what a freakish picture, to see a top lawmaker, someone who has the power to change the law, not bothering with that, but just advising every illegal how to throw a spanner in the works in order to continue violating U.S. law from the original crime of thumbing one's nose at U.S. immigration law.

And cripes, it takes a lot to get a deportation order — years of repeated crimes against U.S. citizens, repeated absence of merit or contributions, zero mitigating factors, repeated failure to show up for court dates, repeated impunity…

Worse still, she says she's using the churches to push this message out. A couple weeks ago at my Catholic church in San Diego, the priest played a strange video totally irrelevant to the Gospel read after the homily, showing the pope speaking about the importance of welcoming migrants with no cognizance of rule of law or justice. It was strange, not just for its moral blindness to any balance or justice, but also because of the pope's role in supporting Venezuela's dictator, Nicolás Maduro, the foremost creator of millions of refugees in the world today. In retrospect, probably, it was Pelosi's doing, playing domestic politics in the pulpits, manipulating church services themselves with her agenda of padding the Democrats' congressional seating and benefiting from illegal votes, and now she's bragging about the hooks she's got in with the Vatican, completely politicizing the Church to her agenda. Sickening.

It goes to show that this is a madwoman intent on ensuring there is no president with any power in the White House and that the Americans' votes who put him there are meaningless, too. She's a lawmaker — a top lawmaker — and she's got the power to pass a law to make all comers to the states free and clear without the nonsense of any legal process. She has the power to increase quotas of immigrants, which might discourage some illegal aliens. She has all kinds of powers as lawmaker, and she's not bothering with any of them. What we see with this is someone with no respect for rule of law — just a Legislative Branch more interested in playing obstructionist lawyer, making a mockery of rule of law.