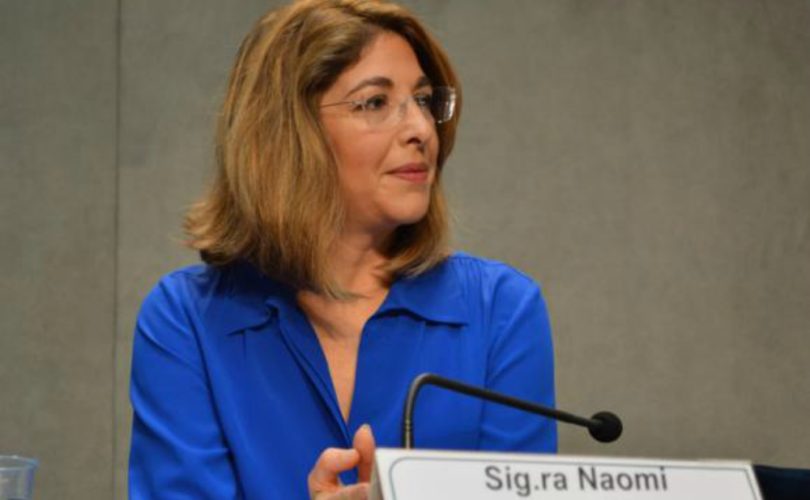 Naomi Klein speaks at the Vatican

July 17, 2015 (LifeSiteNews) — “A Radical Vatican?” is the attention-getting title of a revealing article published in The New Yorker on July 10, by a self-described “secular Jewish feminist” whom the Vatican unexpectedly hosted at a July 2-3 conference on the papal encyclical Laudato Si’.

Naomi Klein’s 2007 book “The Shock Doctrine: The Rise of Disaster Capitalism”, an often excellent and candid analysis of serious problems facing our contemporary world as a result of unbridled capitalism, may explain the Vatican’s interest in her, in light of Pope Francis’ strong criticism of the inhuman forms of globalized capitalism.

Her candid account in The New Yorker of her visit to the Vatican is well worth considering, because her observations may further disclose some of the grave changes that are quite openly, even shockingly, now taking place in the Vatican itself and in the Catholic Church more broadly. Her article also offers a useful picture of how Pope Francis’ Vatican is perceived by many in her more progressive mould. And it might reveal at some points reality. Important to note, however, is that she mostly talks about conversations with clergymen who might have a more heterodox understanding of the Faith. This might explain some of her misinterpretations, for example that the Church traditionally had a hostile approach to nature or a “loathing for the corporeal world.”

Klein rightly reports that among conservative Catholics there has been much criticism for the fact that non-Catholics are given so much scope and influence in the Church's recent discussions. She thus sums up her perception:

This is a reference to the fact that some traditionalists have been griping about all the heathens, including United Nations Secretary-General Ban Ki-moon and a roster of climate scientists, who were spotted inside these ancient walls in the run-up to the encyclical’s publication. The fear is that discussion of planetary overburden will lead to a weakening of the Church’s position on birth control and abortion. As the editor of a popular Italian Catholic Web site put it recently, “The road the church is heading down is precisely this: To quietly approve population control while talking about something else.”

While having a mocking undertone in her description, she laments how the “Pope Francis effect” has not led to a sufficient weakening of the Church's attitude on issues like marriage, abortion, and the family, at least in the United States:

The contrast is a vivid reminder of just how far Pope Francis has to go in realizing his vision of a Church that spends less time condemning people over abortion, contraception, and whom they marry, and more time fighting for the trampled victims of a highly unequal and unjust economic system. When climate justice had to fight for airtime with denunciations of gay marriage, it didn’t stand a chance.

Klein also describes her impression that the new tone in the Vatican with reference to nature and the earth is revolutionary:

As for the idea that we are part of a family with all other living beings, with the earth as our life-giving mother, that too is familiar to eco-ears. But from the Church? Replacing a maternal Earth with a Father God, and draining the natural world of its sacred power, were what stamping out paganism and animism were all about.

By asserting that nature has a value in and of itself, Francis is overturning centuries of theological interpretation that regarded the natural world with outright hostility—as a misery to be transcended and an “allurement” to be resisted. Of course, there have been parts of Christianity that stressed that nature was something valuable to steward and protect—some even celebrated it—but mostly as a set of resources to sustain humans.

She as a secularist notices a different tone in the Vatican that some Catholics might tend to overlook. Klein also recounts the words of a liberal priest and theologian, Father Sean McDonagh, who has had a large influence over the drafting of the encyclical and who even calls the text “a new theology”:

This point is made forcefully by the Irish Catholic priest and theologian Seán McDonagh, who was part of the drafting process for the encyclical. His voice booming from the audience, he urges us not to hide from the fact that the love of nature embedded in the encyclical represents a profound and radical shift from traditional Catholicism. “We are moving to a new theology,” he declares.

To prove it, he translates a Latin prayer that was once commonly recited after communion during the season of advent. “Teach us to despise the things of the earth and to love the things of heaven.” Overcoming centuries of loathing the corporeal world is no small task, and, McDonagh argues, it serves little purpose to downplay the work ahead.

While at a dinner after one of the conference meetings, Klein is surprised to meet many liberal religious and priests who are also participating in the event. She names names:

My dinner companions have been some of biggest troublemakers within the Church for years, the ones taking Christ’s proto-socialist teachings seriously. Patrick Carolan, the Washington, D.C.-based executive director of the Franciscan Action Network, is one of them. Smiling broadly, he tells me that, at the end of his life, Vladimir Lenin supposedly said that what the Russian Revolution had really needed was not more Bolsheviks but ten St. Francises of Assisi.

Now, all of a sudden, these outsiders share many of their views with the most powerful Catholic in the world, the leader of a flock of 1.2 billion people. Not only did this Pope surprise everyone by calling himself Francis, as no Pope ever had before him, but he appears to be determined to revive the most radical Franciscan teachings. Moema de Miranda, a powerful Brazilian social leader, who was wearing a wooden Franciscan cross, says that it feels “as if we are finally being heard.”

In bolstering her impression that many liberal theologians and religious are being more listened to now at the Vatican, she comes back to Father McDonagh, who had avoided meeting the reigning pontiffs for years but now helps to write an encyclical:

For McDonagh, the changes at the Vatican are even more striking. “The last time I had a Papal audience was 1963,” he tells me over spaghetti vongole. “I let three Popes go by.” And yet here he is, back in Rome, having helped draft the most talked-about encyclical anyone can remember.

McDonagh points out that it’s not just Latin Americans who figured out how to reconcile a Christian God with a mystical Earth. The Irish Celtic tradition also managed to maintain a sense of “divine in the natural world. Water sources had a divinity about them. Trees had a divinity to them.” But, in much of the rest of the Catholic world, all of this was wiped out. “We are presenting things as if there is continuity, but there wasn’t continuity. That theology was functionally lost.” (It’s a sleight of hand that many conservatives are noticing. “Pope Francis, The Earth Is Not My Sister,” reads a recent headline in The Federalist, a right-wing Web magazine.)

As for McDonagh, he is thrilled with the encyclical, although he wishes it had gone even further in challenging the idea that the earth was created as a gift to humans. How could that be so, when we know it was here billions of years before we arrived?

I ask how the Bible could survive this many fundamental challenges—doesn’t it all fall apart at some point? He shrugs, telling me that scripture is ever evolving, and should be interpreted in historical context. If Genesis needs a prequel, that’s not such a big deal. Indeed, I get the distinct sense that he’d be happy to be part of the drafting committee.

In her honesty, Naomi Klein wonders how these liberal-minded religious have endured, and for so long, to remain in the Catholic Church while being such outsiders. She says:

I wake up thinking about stamina. Why did Franciscans like Patrick Carolan and Moema de Miranda stick it out for so long in an institution that didn’t reflect many of their deepest beliefs and values—only to live to see a sudden shift that many here can only explain with allusions to the supernatural?

And once more, the Jewish author of several books criticizing global capitalism and the destruction of nature, describes how she perceives the revolution taking place in the Catholic Church as redirecting the traditional mission to convert others to the Catholic Faith:

A millennia-old engine designed to proselytize and convert non-Christians is now preparing to direct its missionary zeal inward, challenging and changing foundational beliefs about humanity’s place in the world among the already faithful. In the closing session, Father McDonagh proposes “a three-year synod on the encyclical,” to educate Church members about this new theology of interconnection and “integral ecology.”

The Canadian author sees hope for a revolution in the whole world, and especially toward a more “sustainable” attitude – at the Vatican conference itself, she compared the lifestyle-sacrifices demanded by sustainability to the stern life-conditions endured during the Great Depression and World War II – especially if an institution like the Catholic Church herself can now undergo such deep changes under the reigning Pope Francis:

The most powerful example of this capacity for change may well be Pope Francis’s Vatican. And it is a model not for the Church alone. Because if one of the oldest and most tradition-bound institutions in the world can change its teachings and practices as radically, and as rapidly, as Francis is attempting, then surely all kinds of newer and more elastic institutions can change as well.

And if that happens—if transformation is as contagious as it seems to be here—well, we might just stand a chance of tackling climate change.