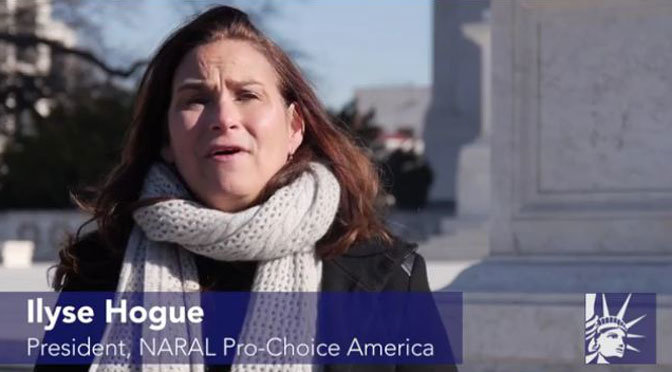 Feb. 8, 2016 (LiveActionNews) — Despite the oft-repeated pro-choice claim that women don’t take abortion lightly, NARAL Pro-Choice America president Ilyse Hogue has published a video online which follows in lock-step alongside other abortion rights leaders like Planned Parenthood president Cecile Richards, openly admitting that her abortion was for reasons of convenience – not for a “hard case.”

Hogue’s contraception failed, and because she believed she couldn’t achieve her dreams if she gave birth to a child, she chose abortion out of convenience:

She begins by stating:

I’m Ilyse Hogue. I’m the president of NARAL Pro-Choice America, which I might not be if I hadn’t had access to a legal abortion twenty years ago when I got pregnant due to a contraception failure.

Let’s pause here and dissect what she just said. The feminist president of an abortion group just implied that pregnancy alone can keep a woman from success – even at approximately 26 years of age (Hogue is now 46). Next, she says:

I always say my abortion story is boring. I got pregnant, I wasn’t ready to be a parent, I wasn’t with the person I wanted to be with for the rest of my life, we weren’t financially secure, we both had dreams that we wanted to go on and achieve.

Does having a child mean that one cannot achieve one’s dreams?

I think about my abortion, but I certainly don’t regret it. It allowed me to go on and do work that I think was incredibly impactful… If we can’t decide that we’re not ready to be parents then everything else we aspire to fades from view.

“Everything else we aspire to fades from view”? How dramatic. Why is it that adoption is so rarely considered when a woman thinks she “isn’t ready” to parent a child? And where is the feminist empowerment in Hogue’s claims that giving birth to a baby would have sunk her entire future? Hogue’s “boring abortion story” is really a story of failure for 21st century feminism rather than some fake sense of liberation, as Hogue promotes the very old-fashioned notion that motherhood somehow hinders women. On the other hand, pro-life feminist groups like New Wave Feminists and Feminists for Life are growing in popularity because they promote modern, life-affirming solutions for women. Let’s face it, Hogue’s “boring abortion story” is not a positive message for women.

Amazingly, the NARAL leader just had a twins and – surprise! – she is still the head of NARAL! Hogue made the announcement on her Facebook page last June:

June 17th, my husband and I were thrilled to meet our new daughter and son when they came into the world at 11:29 and 11:34 am respectively. We’re still getting used to being new parents with all of the flood of emotions– overwhelming joy and confusion and awe.

In her video, Hogue also makes the claim that where abortion access goes down, the number of injuries and deaths from abortion go up. One problem: there’s no proof of this. One more problem: women have been injured and killed (to name a few: Jennifer Morbelli, Karnamaya Mongar, Tonya Reaves) for the past 43 years from legal abortion, without even a whisper of concern from NARAL or any other abortion rights organization.

What Hogue and NARAL don’t seem to grasp is that their definition of feminism, along with the targeting of a weaker individual – a woman’s own child – diminishes women as a whole. Pro-life feminist Erika Bachiochi said it best in an op-ed she penned for CNN:

We give her the inhumane (but for 42 years, constitutionally protected) right to decide the fate of another human being, of a vulnerable child — her child — to whom she properly owes an affirmative duty of care. We do all this rather than offering her the myriad familial and social supports she needs, whatever her situation, and cherishing her role in the miracle of human life.

The sign of a strong woman is not in how quickly she will sacrifice her own flesh and blood for personal ambition, but in how she maintains her dignity and that of her child while working through a challenging situation to find real solutions.  Many women in much more difficult circumstances than Hogue’s have chosen a better way: instead of viewing their own offspring as expendable “mistakes,” they have faced their challenges while embracing and protecting life.