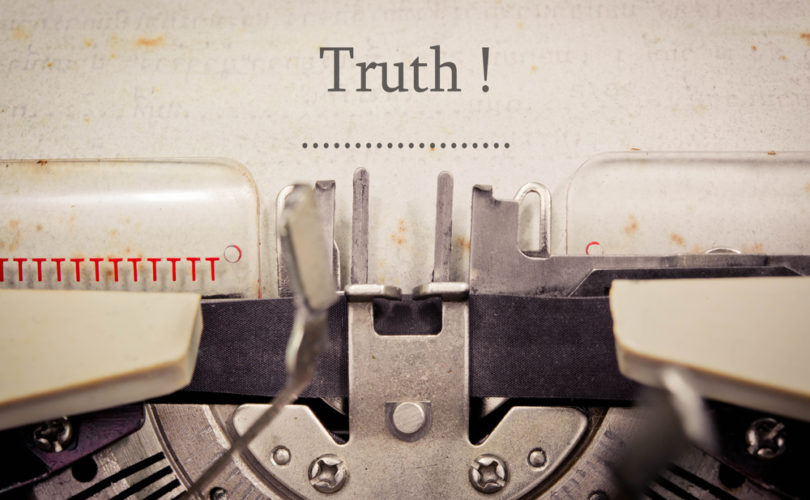 April 20, 2018 (Live Action News) – When your job is to ensure that women in America not only retain the right to end the lives of their children through abortion but to convince them they should celebrate this horror, it isn't surprising that you would stoop to lying to get what you want. That's what NARAL Pro-Choice America was caught doing on March 20, 2018, during a hearing with Connecticut's Public Health Committee for a bill that would have dictated how private, donor-funded pregnancy resource centers in the state advertise.

NARAL, threatened by pro-life pregnancy resource centers and clinics that offer women real choices instead of abortion, and which outnumber hugely abortion facilities, attempted to get the Public Health Committee to take on the bill that would force PRCs to post signs indicating what they don't provide. The bill died six days later because the committee saw right through NARAL's agenda.

NARAL Pro-Choice Connecticut arrived at the hearing armed with testimonies from women who claimed that PRCs, including A Better Choice's Women Center in Middletown, had misled women and tricked them into entering their centers. But the truth is that it was NARAL as usual who was doing the misleading. At least one of their supposed testimonies was proven to be a completely fabricated story about a non-existent woman. And if one of their testimonies was fake, then none of the others could be trusted.

The testimony in question concerned a supposed 19-year-old client of ABC Women's Center who allegedly told NARAL that she had gone into the center for a pregnancy test and was made to feel ashamed of herself and was given religious documents against her will. However, ABC Women's Center keeps records on every client and they were, therefore, able to fact-check the testimony.

“There was no actual client that came into ABC that was 19 in 2015 that fit the criteria,” Christina Bennett, former employee of ABC and communications manager for Family Institute of Connecticut told Pregnancy Help News. “So, what we really believe is that some of NARAL's testimonies were just made up.”

The Public Health Committee asked NARAL why these women didn't appear to testify themselves, and NARAL claimed they were too frightened to do so. The members of the committee also questioned why none of the women had gone to the police, consumer affairs, or other public officials. How was it possible that every complaint came to the committee through NARAL? Likely because they were fake.

This isn't the first time NARAL's been caught lying about pregnancy resource centers. In 2014, they claimed that when they searched Google for abortion facilities, almost 80 percent of the time it was pregnancy help centers that came up and that those centers were misleading about the “options” they offer in order to trick women into coming to the pregnancy center. It should be noted that not offering abortion does not mean that there are no options offered. It means there are non-violent options. Planned Parenthood, however, offers one option: abortion. NARAL said that in response to this, Google took down many of the pregnancy help center advertisements. But it turned out that NARAL was lying and Google never took any of the pro-life center ads down.

In addition, NARAL president Ilyse Hogue appeared on MSNBC in 2013 to share the organization's undercover investigation into a pregnancy center in Virginia. NARAL claimed that it caught the pregnancy center lying, but was that true?

Host Al Sharpton began the segment by playing a recording of the pregnancy center staffer telling a client that condoms are porous and are not effective in preventing pregnancy and STDs. Sharpton and NARAL considered this a lie, except that it's true. Condoms are not 100 percent foolproof and have a 14 percent failure rate with typical use and a three percent failure rate even when used with preciseness. Condoms made from natural materials don't protect against viral organisms like HIV and both natural and latex condoms are porous. Even the quote Sharpton shared in order to back up the claim that the PRC was lying proved that condoms aren't perfect. The quote from the CDC stated that condoms create an “essentially impermeable barrier to particles the size of STD pathogens” however Sharpton conveniently left out the keyword “essentially.”

Sharpton then claimed that NARAL caught the PRC staffer lying when she said that birth control pills cause cancer. But in fact, hormonal birth control is linked to cancer. So, no lying there.

Sharpton aired the PRC staffer talking about abortion being murder and women who have had abortion suffering emotionally afterward. While this may not have been the best way to show a woman she can choose life, but none of it was a lie.

While Hogue tells Sharpton that PRCs use taxpayer dollars, this is not in the case. The majority of PRCs across the country do not receive any federal money, nor do they want to.

One thing Hogue states that actually isn't a lie is that PRCs position themselves in poor neighborhoods in order to reach women who have access to fewer resources than women who are well off. This is true. What Hogue fails to mention is that PRCs don't just tell women to choose life and then send them on their way. PRCs give women free services and products. They give them baby gear and clothing. They will even help them get access to health care. Some PRCs even provide housing and help the woman finish her education. Therefore, of course they would be in low-income areas, that's where women who want to choose life need the most assistance to do so.

Often times, women believe that abortion is the only option they think they have because groups like NARAL don't do anything to actually help them get out of poverty. While Planned Parenthood would take a struggling woman's last dollar to perform an abortion, send her out the door, and call that “help,” PRCs will give that woman actual help free of charge in order to help her rise above and out of her situation and care for her child.

Currently, the Supreme Court is considering the case of NIFLA v Becerra. This case is in regards to California's so-called Reproductive FACT Act, which is actually a law based on falsehoods. The law requires PRCs to distribute the following statement to those who come to them for help:

“The law is indeed so strenuous and bold-faced that it would, in some cases, require nonprofit pregnancy resource centers to include a 29-word, state-mandated statement on a billboard that would otherwise simply say, 'Choose Life.' And not only would the 29 government words be required, but they would also be required in the same font as the nonprofit's chosen, paid-for message. Additionally, in some California counties, the 29 words would have to appear in 13 different languages,” noted Live Action News' Kristi Burton Brown.

During the oral arguments in the case, Justice Elena Kagan went so far as to say that it appeared California had “gerrymandered” the law in order to specifically target PRCs, and if so, it's “a serious issue.” Justice Neil Gorsuch, added, “If you're trying to educate a class” of people “about their rights, it's pretty unusual to force a private speaker to do that for you under the First Amendment.”

Once oral arguments were completed, mainstream media and legal analysts both seemed to agree that the Supreme Court will side with PRCs and strike down California's biased law.

NARAL Pro-Choice America has the mainstream media on its side as is evident in the interview with Sharpton. However, just as is always the case with lies, eventually the truth will be brought into the light. If the Supreme Court does indeed rule in favor of pregnancy resource centers, it will give validation to the fight to save women and their children from the horrors of abortion and verify that pregnancy resource centers exist to help women who choose life.