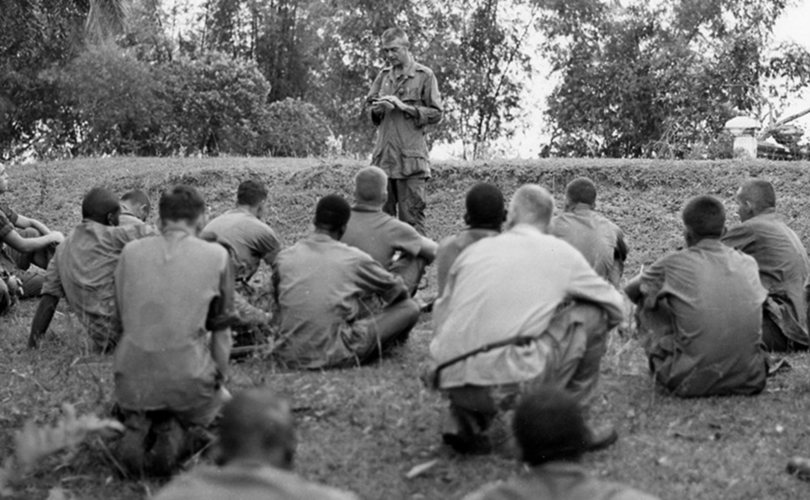 Editor’s note: Matthew Bosnick served as an infantryman with 1st Battalion, 6th Marines in Marjah and Sangin, Afghanistan. He is a Lay Dominican and works as a firefighter. He and his wife have three children and live in Monroe, North Carolina.

(LifeSiteNews) — Father Vincent Capodanno lived an inspiring life. Beginning his priestly ministry as a Maryknoll missionary, he became a Navy chaplain shortly after the Vietnam War broke out and served side-by-side in combat with Marine infantrymen.

Capodanno was killed in action on September 4, 1967, after shielding a wounded Marine from machine gun fire. The chaplain had already been wounded twice in the battle and had given a dying Marine last rites before giving his own life. Capodanno was awarded the Medal of Honor for his heroism.

The Marines with whom Capodanno served testified that he would volunteer to go on patrol with them instead of staying “inside the wire,” where it was safe. He offered Mass, heard confessions, counseled the weary, and was an image of Christ to the Marines.

— Article continues below Petition —
PETITION: Canonize Navy chaplain Fr. Capodanno for giving his life to save souls
Show Petition Text
7873 have signed the petition.
Let's get to 9000!
Thank you for signing this petition!
Add your signature:
Show Petition Text

Because of this, many were surprised to learn in August that the cause for Capodanno’s canonization was suspended, due in part to his military service: “With ongoing military actions in the world today, raising someone from the military for veneration may not be appropriate for our Church,” one Vatican consultant wrote. However, Capodanno should be venerated and imitated precisely because of the reality of war and the relationship of many veterans to the Church.

Despite the sincere gratitude given them by their countrymen, veterans of Iraq and Afghanistan face challenges adjusting to civilian life. American culture can be both individualistic and tribalistic, with little agreement on the common good, much less on how to attain it.

In his 2016 book “Tribe: On Homecoming and Belonging,” war correspondent Sebastian Junger posited that American social and political conditions are the main cause of the problems war veterans experience when they leave the military. These conditions exacerbate the issues of psychological illness and substance abuse that some veterans have or develop. Along with that, some veterans carry spiritual wounds that need healing, and there are certainly sins that need to be acknowledged, confessed, and forgiven.

These problems require a spiritual solution, but young veterans, just like other Millennials, are unlikely to seek this out in the Church.

This is where the example of Capodanno is necessary. The chaplain desired to be where the fighting and suffering was because that is where there was most need of the Gospel and the sacraments of healing. He knew it was his purpose to be on the front lines.

Through his friendships with the grunts, the chaplain was able to give them the saving Gospel of Jesus Christ and showed them through his holy life who Jesus is. He went to the margins – where an increasingly unpopular war was being fought – and served men who often came from the poor, underprivileged parts of society.

Sharing their suffering and bearing their burdens gave Capodanno credibility with the Marines and opened them to the Gospel, as well.

There is nothing romantic or unrealistic about Capodanno’s approach. War is not glorified when wounds are uncovered and when sins are brought to light so they can be washed away. The ingrained callousness to death and killing has to be removed. Truth brings clarity to moral problems but can cause pain at first. Capodanno’s example is essentially that of Christian friendship and can be practiced by anyone. All that is necessary is to be open to other people, to be present for them, and to show by a holy life and simple testimony that Jesus heals and saves.

Sometimes all that can be done is to listen, pray, and do penance for a friend. Capodanno earned respect among the grunts because he did all this while staying completely faithful to his ministry. He was completely aware of the moral problems with war and did not gloss over them, but recognized the Marines needed the light of Christ with them.

Capodanno’s life is worthy of imitation because it inspires us to love God and neighbor, to become holy. He was like the Good Shepherd because he risked his life and laid it down in the service of his friends.

This Veterans Day, Catholics should consider that the Church’s stance towards war veterans should mimic that of the humble chaplain. Instead of being distanced from them, we should be like Capodanno and go where we are needed so that we can communicate by word and life the redeeming, merciful love of Jesus.