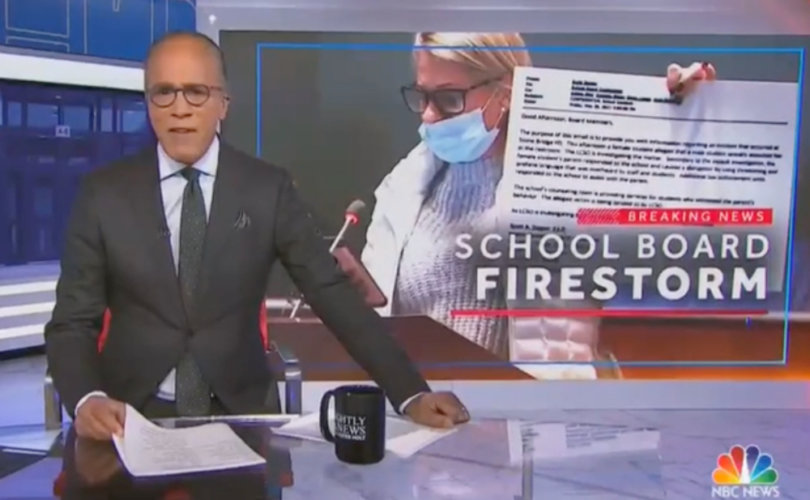 (NewsBusters) – The liberal TV news blackout of the “gender-fluid” rapes in Loudoun County, Virginia was finally broken Wednesday evening by NBC Nightly News and correspondent Catie Beck. Yet it was anything but fair as the network took to suggesting the cases and the school district were being exploited by parents as well as the state and national Republican Party as they looked for an upset in the tight race for governor and beyond.

After desperately trying to ignore the firestorm for two weeks, anchor Lester “fairness is overrated” Holt broke the news to his audience.

“A school board in Virginia is at the center of a firestorm. Parents demanding resignations after they say a sexual assault on campus was covered up,” he announced before questioning the motives of parents: “Now, it is a hot button issue in the state’s very tight governor’s race.”

Beck’s report started fine, noting that at a school board meeting Tuesday night “parents reach a boiling point. Once, again, school board members facing the heat.”

Although she omitted the “gender-fluid” identity of the attacker, Beck gave a half-decent rundown of the facts in the case:

Many parents demanding new leadership after they say a sexual assault at a county school was covered up by administrators to advance a transgender bathroom policy.

(…) A judge finding this week a 14-year-old male student guilty on two counts of sexual assault. Officials saying he wore a skirt, entered a girl’s bathroom and assaulted a 15-year-old female student back in May. He was later accused of assaulting another student at another school in October.

She even pointed to the facts that suggested a massive cover-up attempt by the school board:

BECK: School leaders say they notified authorities of both allegations immediately. Though at a June meeting, the superintendent saying this.

BETH BARTS (School board member, Leesburg District): Do we have assaults in our bathrooms, in our locker rooms?

SCOTT ZIEGLER (School superintendent): To my knowledge, we don’t have any records of assaults occurring in our rest room.

“Angry parents calling that a lie after the release of an internal e-mail sent from the superintendent to school board members in May notifying them of the incident,” Beck reported.

But soon after admitting all that, she shifted gears to questioning the motives of parental outrage and interest in the district.

“It’s the latest example of this divided district turning into a culture war battleground. Other issues include mask mandates and Critical Race Theory,” she said. “But some in the school community say the voices at board meetings don’t speak for the majority of parents and that some may be trying to sway the governor’s race.”

Beck spoke with a failed school board candidate and a radical leftist teacher who suggested all the outrage and the show of defiance by parents was staged for political purposes:

BECK: How would you describe what is going on?

CATRICE NOLAN: I would describe it as created chaos. I think it’s been created.

BECK: One Loudoun teacher saying, while there should be accountability on the assaults, she questions the timing.

UNIDENTIFIED TEACHER: It all came about all at once. It exploded when all of the elections so close.

This was another case of bias by omission because Beck failed to note that the father of the first victim, Scott Smith, was arrested at a school board meeting in June when he tried to speak about it. In fact, the clip she used of the members dismissing rapes on campuses came from that meeting.

Those claims were followed up with a soundbite Republican gubernatorial candidate Glenn Youngkin speaking about what was happening in Loudoun. That was then countered with a Barack Obama soundbite where he declared: “We don’t have time to be wasting on these phony trumped up culture wars. This fake outrage.”

And although she did speak with a Loudoun parent who attested to the true grassroots nature of the parental outrage toward the school board, Beck concluded the segment with comments from University of Virginia’s Larry Sabato purporting that “Loudoun is a perfect proving ground for what Republicans hope to do in 2022. They need to capture the suburbs again.”

ABC, CBS, CNN, and MSNBC were still holding strong to the blackout. NBC didn’t give an explanation to why it took them so long to mention the rapes despite discussing the Virginia election on Sunday and Tuesday.

NBC’s late arrival to the story and then dismissal of parental outrage was made possible because of lucrative sponsorships from Amazon, Ford Motor Company, and T-Mobile. Their contact information is linked so you can tell them about the biased news they fund.