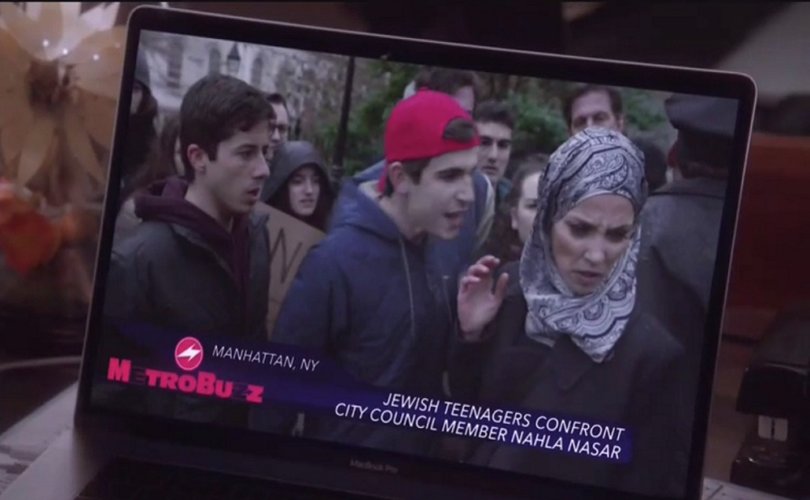 May 13, 2019 (NewsBusters) — NBC's Law & Order: Special Victims Unit is really stretching that “ripped from the headlines” mindset with its latest episode. Not only does SVU maintain the media lie about the Covington Catholic kids (this time with Jewish students), the show also manages to play defense for Rep. Ilhan Omar (with a Muslim councilwoman standing in for “Native American elder” Nathan Phillips). Who knew you could fit so much intersectional dishonesty into one hour?

The May 9 episode “Assumptions” opens with two Jewish teenage boys running from a vandalized synagogue where we find Muslim Councilwoman Nahla Nasar (Nazneen Contractor) has been raped. Since one of the teens, named Ari (Ted Sutherland), wore a red cap, a narrative quickly forms, especially when Nasar points him out in a lineup. “This boy grabbed my hijab and spat in my face,” she says. “These people are Islamophobes. It's in their blood. One of these boys must have raped me.”

To add more fuel to the fire, a new video surfaces online of the teens with Nasar. The teens accused of vandalizing the synagogue were actually members of a Jewish group protesting the councilwoman. During their wait to leave, the video depicts the Jewish boys seemingly getting in Nasar's face in a way that's oddly reminiscent of the Covington Catholic kids' story — or rather, the story the media wanted us to believe.

Ari: You're an anti-Semite!

Nasar: Stop spitting in my face like some kind of animal.

Ari: Hey, don't you dare call me an animal!

Nasar: Are you trying to rip off my hijab?

Nasar: You all saw! An act of aggression no different than Israeli aggression against the Palestinian people!

Dodds: That was posted an hour ago, along with a report that SVU arrested two Jewish teenagers for the assault on Nahla Nasar.

Olivia: We've made no arrests.

Dodds: Well, someone leaked that you did. Jewish students planning a trip to Israel. Things would have been a lot easier if it was some alt-right thugs.

An investigation eventually reveals that Nasar had provoked the incident by approaching the group directly. Much like with the Covington Catholic kids, the situation was a hoax, but in the show the full video doesn't exculpate Ari's aggressive and hostile interaction. Does Law & Order: SVU know that Nick Sandmann, whom Ari is clearly based on, didn't do anything but stand quietly in place? Does Law & Order: SVU also know that his family is suing NBC for $275 million because they lied just like this? The network ought to watch what it puts out nowadays.

What's worse is the Ilhan Omar–like depiction of Nasar. Like Omar, Nasar is described as anti-Semitic and even uses the same “it's all about the Benjamins” smear Omar had tweeted just a few months ago. Unlike Omar, however, Nasar reveals herself to be a lesbian, being targeted by her ex-husband for something that is abhorrent to Sharia law. As the case continues, we learn that it was, in fact, her ex-husband who attacked and raped her.

By the end of the episode, Nasar manages to have her rapist convicted, her parents' acceptance of her alternative lifestyle, and her job intact. And no, the fact that she lied about the boys raping her, made anti-Semitic remarks, and provoked a racial confrontation doesn't seem to affect any of this. All that mattered was that the public remembered that she was a victim.

In one hour, Law & Order: SVU reminded us exactly what's wrong with mainstream media. All that matters to them is propping up whichever side is highest in the intersectional hierarchy at the expense of the truth, no matter how many lives are ruined.