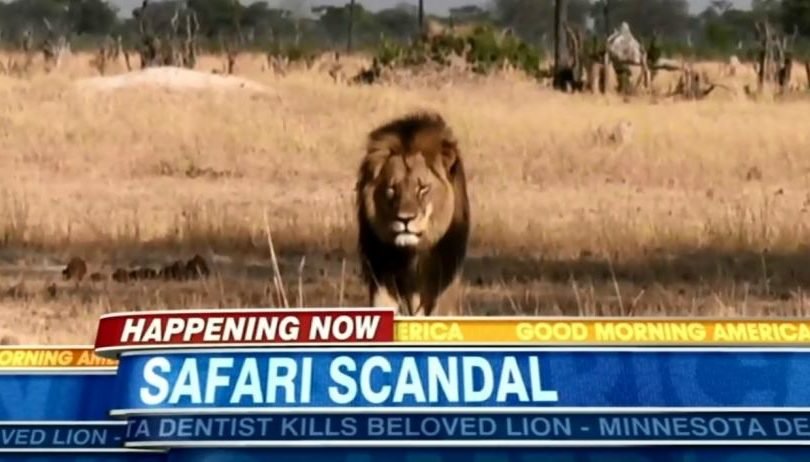 (Newsbusters) – America’s anchors have spoken: the shooting of one lion vastly outweighs the trafficking of baby parts by a taxpayer-funded abortion giant.

In other words, the broadcast news shows spent more time in one day on Cecil the Lion than they did on the Planned Parenthood videos in two weeks.

The three broadcast networks, ABC, NBC and CBS censored the third video released Tuesday by the Center for Medical Progress (CMP) exposing Planned Parenthood’s practice of harvesting aborted baby parts — censored it at Planned Parenthood’s urging. But the news shows did find more than 14 minutes for a more important story: the “outrage” over the shooting of Cecil, a famed African lion, by an American dentist.

Tuesday, the networks spent 5 minutes, 44 seconds during their evening news shows on Cecil — and that’s not even counting the teasers. Wednesday morning, ABC, NBC and CBS lamented over the lion for 8 minutes, 17 seconds.

But they couldn’t do the same for a story of babies “picked” apart by tweezers.

On July 29, Good Morning America co-anchor Lara Spencer highlighted the “very disturbing story” with “international outrage” before turning to ABC correspondent David Wright for the full story on the lion-shooting by an American, now, according to Wright, “pretty much the most hated man on the internet.”

“There are no words,” Spencer added at the end of the segment. Again, we’re talking about a lion.

For CBS’ This Morning, co-anchor Gayle King commented, “The more you hear about it, the more upsetting it is.”

For the shooting of a lion, yes. For the weekly videos exposing the trafficking of baby parts, no. (According to the media, that is.).

“I heard somebody in South Africa describe it,” King added. “It would be like in this country, if somebody shot Lassie, and then said, ‘We didn’t know that was Lassie.’”

Similarly, host Scott Pelley commented the night before on CBS’ Evening News: “It’s as if someone had killed Lassie.”

NBC’s Today host Matt Lauer noted the “outrage around the world” as well as the “incredible reaction to this story online.”

In addition to their main story, CBS This Morning covered Jimmy Kimmel’s reaction to Cecil. King stressed, “A lot of people feel the way Jimmy Kimmel does, choked up, sad and very angry about this.”

Kimmel became teary talking about the “disgusting tragedy” on his July 28 show, spending 4 minutes, 42 seconds on the lion.

“I’m honestly curious to know why a human being would feel compelled to do that?” he asked at one point.

Others chimed in on the story, like PETA: “All wild animals are beloved by their own mates and infants,” the organization’s press release read, “but to hunters like this overblown, over-privileged little man, who lack empathy, understanding, and respect for living creatures, they are merely targets to kill…”

“I will sell tickets for $50,000 to anyone who wants to come with me and track down fat, greedy, selfish, murderous businessmen like Dr Palmer in their natural habit,” Morgan wrote, before adding “Then we’d calmly walk over, skin him alive, cut his head from his neck, and took [sic] a bunch of photos of us all grinning inanely at his quivering flesh.”

Since the release of CMP’s first video, the three broadcast news shows have spent a total of 11 minutes and 13 seconds on the story exposing the horrific practices by taxpayer-funded Planned Parenthood.

The liberal media raced to defend Planned Parenthood after CMP released its first video. In the first 9 hours and 30 minutes of news shows broadcast after the story broke, ABC, NBC and CBS, spent only 39 seconds on the first video. It took more than 24 hours before all three covered the story. In the week after the first video, the networks gave a mere 9 minutes and 11 seconds to the story (in contrast, the networks devoted more than three times that to the Susan G. Komen controversy, when the charity temporarily decided to defund the abortion giant).

Similarly, the media stayed silent on the case of Philadelphia abortionist Kermit Gosnell. Gosnell's trial, in which witnesses described baby abortion survivors “swimming” in toilets “to get out,” attracted a scant 12 – 15 reporters. Only after 56 days, multiple letters from members of the House of Representatives and a public outcry, did all three broadcast networks report on Gosnell.