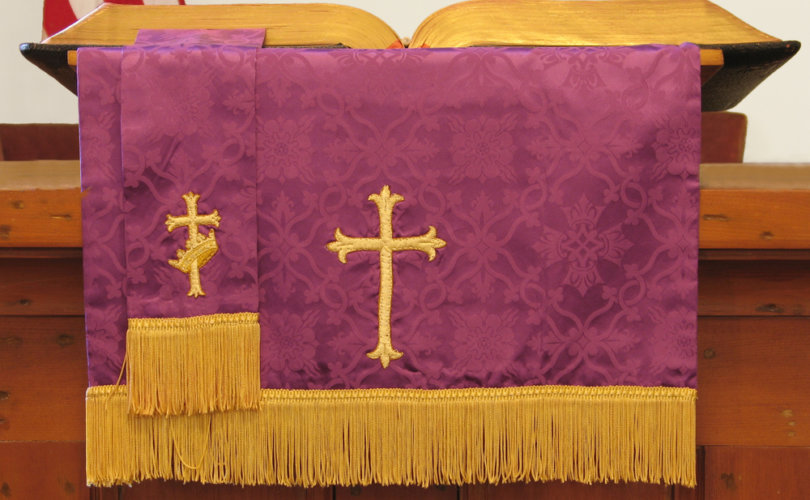 October 4, 2016 (Archdiocese of Washington) — Today I would like to present excerpts from a stirring sermon that St. Augustine delivered to the priests and people of Hippo. In times like these we must all be reminded of the need to preach the Word of God even if the recipients of that word revile us, labeling our very proclamation of love “hate speech.” This is not new; St. Augustine calls us to be resolute and to preach the Word of God in season and out of season. This encouraging message is particularly appropriate for clergy and for all might grow discouraged. Augustine’s words are shown in bold print, while my commentary is in plain text.

[The Lord says:] The straying sheep you have not recalled; the lost sheep you have not sought. In one way or another, we go on living between the hands of robbers and the teeth of raging wolves …. The sheep moreover are insolent. … And in light of these present dangers we ask your prayers [From a sermon on pastors by St. Augustine, Bishop (Sermon 46, 14-15: CCL 41, 541-542)].

Whatever the specifics of St. Augustine’s era, the difficulty of clergy today is to preside over a flock that on the one hand is pursued by the raging wolf of hostile and scoffing secularism, and on the other is robbed of strength by dissension from within. While a hostile world is to be expected, internal dissension is not and is thus even more painful.

In contentious times such as ours, the poison of the world infects the flock and some of God’s own people begin to take up the voice and demeanor of the wolf. In certain times and places, a priest who strives to disclose the errors of the world will be resisted and scorned, referred to as intolerant or hateful. Even some of his own parishioners will resist him and spread talk among the flock that he is not a good priest for the times or for his parish. He will be dismissed by some as out-of-touch or be discounted as “too political.” Some may even walk out as he speaks about controversial issues that are referred to as political but are in fact moral: abortion, euthanasia, same-sex “marriage,” and so forth. Others may write letters to the bishop criticizing him. And while the scoffing of the world is expected, the insolence of the flock is even more discouraging.

Thus St. Augustine says here, “We ask your prayers.” Some priests can fall prey to hostility in sinful ways. Some may give way to anger, which can infect evangelical joy. They will engage in mere argumentation and fall prey to indiscriminate sermonizing. They go from being the Church militant to being the Church belligerent.

More common, and usually more deadly, is when a priest reacts by withdrawing from the battlefield altogether and no longer preaching on any topic considered controversial. He does not seek to correct the straying sheep because it might make them angry, and he is not willing to bear the emotional burden of this resistance or to brave the stormy waters of controversy in order to call to them.

Silent pulpits are all too common today. A priest who is silent from the pulpit may tell himself that he is protecting his people’s feelings by not upsetting anyone. In reality, though, he more comes to resemble the false shepherds denounced by Jesus, the ones who do not really care for their sheep but rather run when the wolf approaches.

The effect on the flock (and the world) is devastating, because Catholics, who are called to be light in the darkness, have come to resemble the darkness. Catholics are indistinguishable from the general populace in terms of our views on the most critical moral issues of our times. Even Catholics who have not caved in to all aspects of the cultural revolution are often ill-prepared to make a defense for the hope and truth that is in them.

Augustine calls some of the sheep “insolent.” The Latin root of the word lends it a meaning of being unaccustomed to something. Thus one who is insolent scoffs at what he does not understand. The straying sheep are often insolent as a result of poor catechesis.

Ignorance of the faith in the pews, along with pressure from a culture that loudly and effectively proclaims its views, present an enormous challenge to pastors. Without persistence and fortitude, many of our clergy can become resigned to mediocrity and inaction.

Thus the urgent request of St. Augustine on behalf of all clergy: “We ask your prayers.”

Augustine then goes on to set forth a model of a shepherd’s heart for his sheep (especially the straying ones) that all clergy should emulate.

The shepherd seeks out the straying sheep, but because they have wandered away and are lost they say that they are not ours. “Why do you want us? Why do you seek us?” they ask, as if their straying and being lost were not the very reason for our wanting them and seeking them out. “If I am straying,” he says, “if I am lost, why do you want me?” You are straying, that is why I wish to recall you. You have been lost, I wish to find you. “But I wish to stray,” he says, “I wish to be lost.”

Yes, with the help of others a good priest seeks out the lost, the confused, and the broken. Many will say that they are not ours or that we should leave them alone. Others will say, “If you don’t approve of what I do and consider me lost and a sinner, why do you want me?” But it is precisely because they are lost that we seek them.

We do not “disapprove” of sinful behavior so that we can sinners off, but so that we can summon them, restore them to the flock from which they have strayed. Why would one search for what is not lost? It is what is lost that is sought. Our disapproval of sin (regardless of how others choose to interpret it) is no different than a doctor’s disapproval of toxic behavior that can lead to cancer; he will caution us to avoid such behavior and to come to him for healing if the cancer has already set in.

Sadly, many today base their fundamental identity in sinful behaviors and interpret our searching for them as an offense, rather than as an act of loving concern.

St. Augustine captures their attitude well: “But I wish to stray, I wish to be lost.” He then he sets an answer that summons us to perseverance:

So you wish to stray and be lost? How much better that I do not also wish this. Certainly, I dare say, I am unwelcome. But I listen to the Apostle who says, “Preach the word; insist upon it, welcome and unwelcome.” … I dare to say, “You wish to stray, you wish to be lost; but I do not want this.” For the one whom I fear does not wish this. And should I wish it, consider his words of reproach: “The straying sheep you have not recalled; the lost sheep you have not sought.” Shall I fear you rather than him? Remember, we must all present ourselves before the judgment seat of Christ.

This is a powerful reminder to every priest and every Christian. Do not lose your zeal for souls. Do not give up. Preach till the day you die, whether your words are welcomed or not.

And even should you lose your zeal, never forget that the Lord has not lost His. We will all report to Him one day to render an account of our lives. Priests, above all, must be stirred to zeal. And if our own love for God and for souls should flag, at least let a holy fear of the day of judgment move us!

Love is the better motive, but failing that, may we be moved by the fear of the Lord and of the day we shall be called to account for our ministry. Further, we must not fear the anger of men more than the indignation of God should we fail Him in the goal for which He ordained us.

Steeled and motivated by this, Augustine concludes with a stirring summons to resolve:

Amen. Stir in us, O Lord, a zeal for souls. Give us your own love and strength. May we desire souls with your very desire for them!

Reprinted with permission from the Archdiocese of Washington's blog.