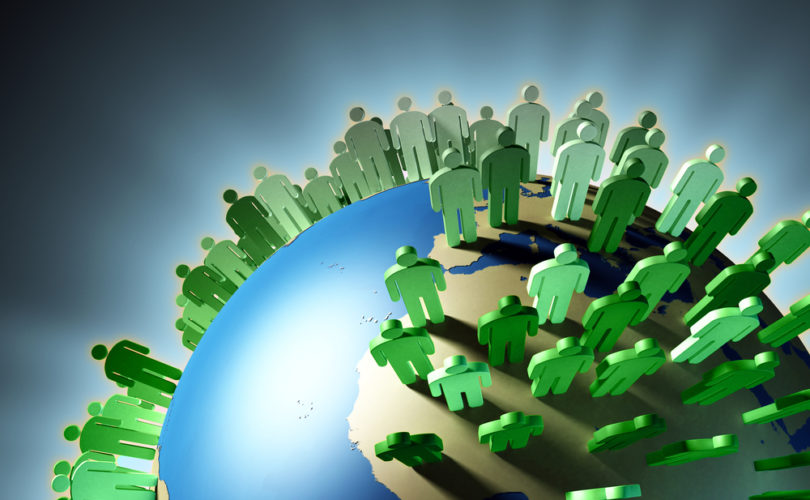 July 13, 2015 (POP) — On July 11th, the United Nations celebrated its 26th World Population Day. The point of this annual exercise is to raise money to promote abortion, sterilization and contraception among poor and vulnerable women by alarming us about the dangers of global population growth.

The problem with this narrative is that, in many regions of the world, the population is declining, not growing. About half the world’s population lives in “low-fertility” countries, where women have fewer than 2.1 children on average over their lifetimes. Low-fertility countries now include all of Europe (except Iceland), the Americas (17 countries), and most of Asia (19 countries). The list of low-fertility countries include China, the United States, Brazil, the Russian Federation, Japan and Viet Nam.

In other words, growth rates have dramatically declined from the late 1960s when the global population grew at a rate of 2.1% each year. That rate is now about 1% a year. The UN’s low variant projection (historically the most accurate) indicates that it will peak at around 8.3 billion in 2050. Even the medium variant projection shows population growth slowing to 0.1% by the century’s end, and turning negative beyond 2100. In either case, the population of the world will never double again.

As these numbers suggest, fertility rates have dipped to all-time lows. The U.N.’s medium variant  projection  estimates that women are now averaging 2.45 children over their reproductive lifetime, while the low variant pegs this at only 2.05. The global average was 4.97 just 60 years ago. Under either variant, this number will be well under replacement by century’s end. After all, global replacement fertility—the rate needed to replace the current generation and prevent population decline—is 2.23 children per woman over her reproductive lifetime.

Many developed nations are already suffering from the effects of population decline. Populations in many areas are rapidly aging as younger cohorts are becoming smaller. Social safety nets are being strained to the breaking point as fewer workers are struggling to support increasing numbers of elderly.

In Japan, increasing urbanization in conjunction with falling fertility rates have resulted in a drastic depopulation of many rural towns and villages. Economic growth is being compromised as workers are in increasingly short supply. The elderly are being abandoned as their only children go on to have no children at all. There are simply too few members of the younger generation to care for them.

Europe is also reeling from the effects of declining populations. In Italy, Portugal, Poland, Russia and throughout most of Southern and Eastern Europe, crude death rates exceed crude birth rates. The fertility rate for all of Europe is 1.58, well off the 2.09 replacement fertility rate, and recipe for demographic disaster.

Growth rates have also slowed in many developing nations. Thailand, Myanmar, and Tunisia are all below replacement level fertility. Even once-fertile Bangladesh is projected to fall below the replacement threshold by 2020. The U.N.’s medium variant projection predicts that the population of Bangladesh will begin to contract after 2060, sooner under the low variant.

China’s Planned Birth policy (one child in the cities; two in the countryside) has driven its fertility rate down to an unsustainable 1.66, far below the estimated 2.22 it needs to stabilize its population. Little girls continue to be aborted or killed at birth in shocking numbers. There are 116 boys born in China for every 100 girls, one of the most skewed sex ratios in the world. Millions of Chinese men will never marry.

In spite of this dismal picture, population alarmists continue to push for population control programs.

Under the Obama administration, population control remains a key foreign aid objective. Various agencies of the U.S. government spent a whopping $2.77 billion on “family planning and reproductive health” in 2014, a sum of money that dwarfs spending on all other health-related assistance, such as nutrition, water supply and sanitation, malaria, pandemic diseases, and general health care.

Only HIV/AIDS received more funding at $3.42 billion, and much of this money also went to population control organizations for population control purposes. The same devices that supposedly stop the spread of AIDS also stop the “spread” of pregnancy.

Expenditures for maternal and child health care, on the other hand, came to a paltry $497 million. Yet the surest way to lower fertility is to lower infant and child mortality rates.

USAID does not exaggerate when it says that it “has been the leading donor in international family planning for more than 40 years…in most years making up 40–50% of all donor funds.”

Given that birth rates are falling farther and faster than anyone imagined possible a couple of decades ago, what’s the U.N. to do to galvanize the U.S. and the world to continue putting this kind of money into the overpopulation pot?

Change the subject, that’s what.

The theme for this year’s World Population Day is not “Overpopulation,” but rather “Vulnerable Populations in Emergencies.” This is nothing more than an attempt to exploit the tragic and desperate conditions of the millions displaced or threatened by war, disaster or violent extremism to raise funds for population control.

Of course, it is true that the UNFPA has no qualms with pushing contraception and abortion on vulnerable populations in their time of greatest need. In its own words: “UNFPA works in emergency settings around the globe to respond to…the needs of women and girls…restoring their access to sexual and reproductive health care.”

Refugees are in desperate need of almost everything. They generally lack shelter, food, access to clean drinking water, health care—the list goes on and on.

And, for this year’s World Population Day, the U.N. wants to give them … birth control.