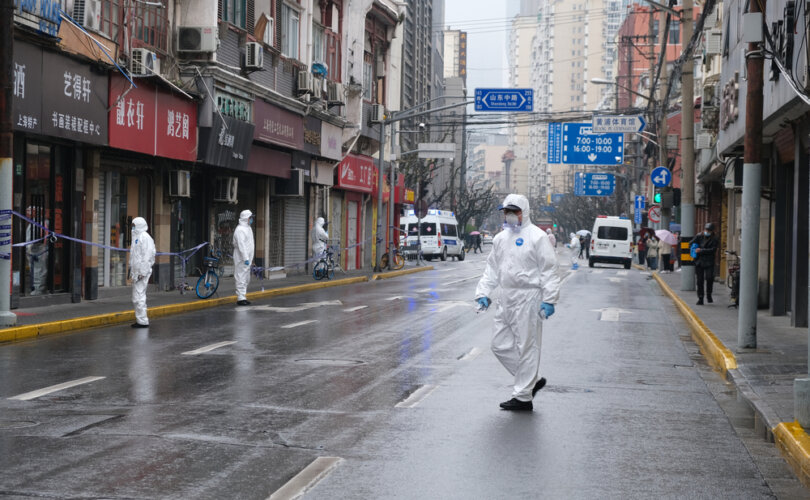 City of Shanghai, China, locked down in January, 2021Robert Way/Shutterstock

(Brownstone Institute) — Sometimes, even now, even after writing a book and probably a thousand or more articles on the topic, and following it every step of the way, it still feels like I dreamed the whole thing. Not a good dream but a nightmare of exceptionally dark attacks on freedom. It got so bad that online memes started deliberately misspelling the word “freedumb.”

They really did cancel two years of public worship services, segregate the large cities, abolish in-person education, foist masks on all the kids, destroy millions of businesses, censor all media so that we could barely discover facts, forget everything that humanity only recently knew about immunity, end concerts, impose limits on house parties, scrap weddings and funerals, lock the elderly into their homes so that kids couldn’t visit, end dentistry, impose travel restrictions across state borders, and…

Yes, I could go on but there remains a sense of unreality about the whole thing. It all happened right here in the land of the free. The Prohibition years (1920–1932) were grim and ridiculous enough and proof that freedom is nowhere entirely and always safe. But the COVID epoch makes Prohibition seem very mild by comparison. The ostensible reason for the sudden imposition of totalitarian rule was to control a virus with an infection fatality rate of 0.035 percent for people under the age of 70.

None of these wildly destructive efforts stopped the virus. It went ahead patiently and infected the whole population that was made woefully unhealthy due to the egregiously coercive response to the virus, and then our immune systems adapted. It was all utter madness, so much so that masses of people just want to forget the whole thing, especially because so many people and both political parties participated.

We are all left with a kind of PTSD. I don’t know what the right cure for that condition is but surely coming to terms with the grim reality of what happened is essential. My worry all along is that the concerted efforts to pretend like none of this occurred, or that it was no big deal, or that it was necessary and needs to happen again, and that governments and experts did their best given the paucity of information, and so on, would actually succeed.

It would be a tragedy if we do not learn from our recent egregious experiences. Reports from the campaign trail of 2022 indicate that the COVID response is a huge issue among voters.

“Among deeply conservative and often Trump-backed congressional and gubernatorial candidates,” writes StatNews, “calls to investigate or even jail Anthony Fauci have become regular campaign rallying cries. Ads lambasting Democrats for school shutdowns, business closures and mask mandates are running in heated races including in Georgia and Florida, where Democratic candidates trail their opponents in the polls.”

My worry is that the COVID response would not become a campaign issue at all simply because both parties are so heavily implicated in the pandemic response. After all, it was former President Donald Trump who was gaslighted into green-lighting the lockdowns in the first place. But even party silence has not been able to stop the waves of outrage. Everyone’s lives were shattered by it all, from the school closures to the deliberate destruction of businesses to the preposterous kabuki dance scripted by the CDC to forever avoid the virus that ended up infecting everyone.

In any case, I’ve waited for the book that could tell the story of all the horrors in a readable form and also back it all by the research we knew was there from the beginning. There are not that many people around who could write such a book simply because there weren’t many people who had a bead on this disaster from the beginning.

One of them is political consultant and businessman Justin Hart, who watched the unfolding of this mess from its first days. He founded the site Rational Ground to document it all, and provide a clearer perspective. He ended up becoming a major source for people who had an intuition that something was very wrong but needed data to back it all up. Like me, he has ended up dedicating nearly three years of his life countering the mania.

Fortunately for all of us – and fortunately for historians of the future who will be utterly perplexed by this period of history – he just has written a brilliant book. It is “Gone Viral: How Covid Drove the World Insane.” I highly recommend this to everyone who has been astonished by the unfolding of events and equally shocked at how little in the way of reckoning has really taken place. Hart is the perfect one for the job here: matching rigor with humor, argument with anecdote, and somehow managing to tell a nearly comprehensive story without ever getting bogged down. The voice is clear, confident, and compelling.

He covers it all: school, church, and business closures, travel restrictions, forced jabs, populist disease panic, media censorship and complicity in lies, and the massive corruption of science.

I especially appreciate his detailed work on masking. He proves their ineffectiveness but also utterly skewers the propaganda to push them anyway. I’m particularly bitter about this subject because it was obvious to me from the beginning how preposterous the whole thing was.

On May 2, 2020, I tweeted that after lockdowns “the face mask will be rightly regarded as a symbol of obsequious obedience and grotesque compliance with arbitrary and ignorant authority.” I’ve never been so much attacked for a single thought in my life, including whole treatises in large-circulation publications, as if I had committed a thought crime. I was trolled for months, even by one-time friends.

That’s how crazy the world had become. Hart’s book chronicles it all, including the stickers on the floor, the one-way grocery aisles, the closing of hospitals and day cares, the insane rules on dining, the supply-chain breakages, and so much more.

Everything here is written with a special confidence that is tremendously admirable, and this is because Hart is one of the few intellectuals who was correct about the whole hullabaloo from the very beginning. Therefore he doesn’t need to embark among some silly dance in which restrictions were fine in the beginning but later became too much. Nope: he kept his wits about him the whole time. Thus does he have the credibility to write without apologies.

He also writes extremely well. We’ve been stuffed to the gills in data, studies, and in scientific claims and counterclaims deploying language that had been unfamiliar to most people until 2020. What we’ve lacked is clear thinking, plain English, and blunt truth in an organized package, turning chaos to order. This is what Hart provides.

No book can cover it all so he is careful to stay away from the purely medical aspects of the controversies about early treatment, for example. However, Peter McCullough covers this ably in “The Courage to Face Covid-19.” Other aspects of this disaster have been covered in Naomi Wolf’s “The Bodies of Others,” Fritjers/Foster/Baker’s “The Great Covid Panic,” Scott Atlas’ “A Plague Upon Our House,” Alex Berenson’s “Pandemia,” and perhaps the forthcoming book by Paul Alexander entitled “Presidential Takedown” for the very weird early history of the pandemic response.

Still, for regular people who seek to come to terms with the madness that befell the world, I would rank Hart’s book among those that should be considered a staple reading on the whole topic. It’s as much a medical and political history as it is a psychological study in mass hysteria. Reading it is a form of therapy in the old Freudian sense: unearthing that trauma we so desperately want to forget and bringing it to the surface so that we can be honest about the sufferings we’ve endured and move on.

A mischievous idea: send a copy to every journalist at every major venue that assisted in drumming up the panic that wrecked our rights, liberties, property, and families. They need to face the truth about what they have done. This book is a great tool of truth and, hopefully, justice.

Republished with permission from the Brownstone Institute.