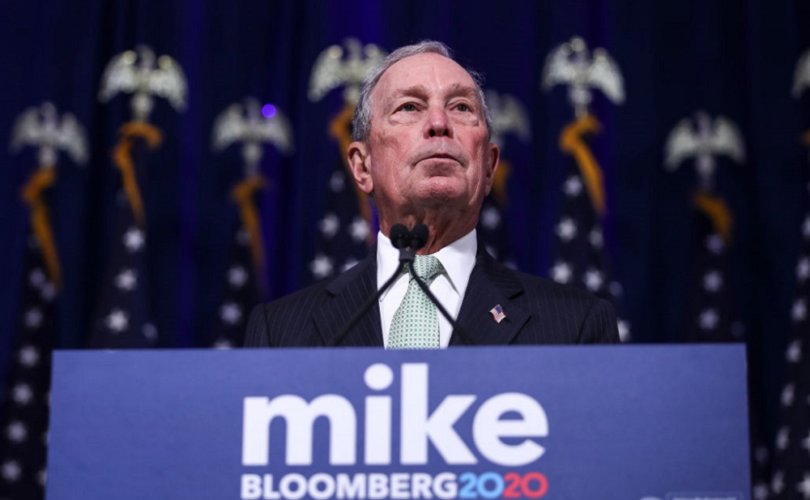 November 27, 2019 (Catholic League) — It was New York City Mayor Rudy Giuliani who turned New York around after the disastrous administration of his predecessor, David Dinkins, and it is a credit to Michael Bloomberg that he continued the quality of life improvements instituted by Giuliani. But on two key social issues — abortion and religious liberty — the presidential candidate was a total bomb.

Bloomberg is one of the most radical pro-abortion politicians in American history. When he first ran for mayor of New York in 2001, he pledged to force everyone training to become an obstetrician or a gynecologist in a city hospital to learn how to perform an abortion. It was NARAL's New York City office that pushed him to accept this outrageous policy. Bloomberg issued an executive order on this issue, but in the end he allowed for moral and religious exemptions.

Bloomberg's passion for abortion allowed him to appropriate $15 million from a civic facility revenue bond transaction that benefited Planned Parenthood. In 2012, the proceeds of the bond were used to finance the renovation of 104,000 square feet of space in the building that housed the abortion giant, supplying it with equipment and furnishing. The new national headquarters was publicly funded even though the Planned Parenthood Federation of America posted a budget of over $1 billion in 2009–2010.

He did not endear himself to Irish Catholics in 2005 when he said he wanted to march in the St. Patrick's Day Parade so he could pressure the organizers to allow homosexuals to march under their own banner. His press secretary explained his boss' reasoning by saying, “The mayor believes the best way to change an organization is to do so from within.” So here we had an agent of the state — the chief executive of New York City — injecting himself into a religious event so he could promote a secular agenda that would undermine its cause.

The courts have long ruled that religious groups have a right to use public facilities, yet Bloomberg denied the right of an inner-city Christian church to hold religious services in a public school on Sundays, setting up a court challenge. He lost in federal district court in 2005, but his censorial effort was not lost on supporters of the Bronx Household of Faith.

Sometimes Bloomberg acts cowardly when confronted with religious liberty issues. He did so in 2007 when a midtown hotel agreed to display in its store-front window a 6-foot, 200-pound anatomically correct chocolate sculpture of Jesus during Holy Week. The Catholic League protested and public opinion forced the hotel to shut down the exhibit. But the best Bloomberg could do was to say the display should be ignored.

He was similarly agnostic when the owner of the Empire State Building refused to illuminate the building in blue-and-white to honor the centenary of Mother Teresa's birthday in 2010. The Catholic League assembled 3,500 protesters in the street outside the iconic building — the owner had previously recognized the 60th anniversary of Red China's genocidal regime — but Bloomberg did not want to get involved. He simply said that the owner should “be consistent.”

In 2011, the Staten Island Ferry Terminals were bereft of holiday displays. Not only were religious symbols such as nativity scenes and menorahs banned, but Bloomberg approved the censoring of secular displays, such as Christmas trees, as well.

Bloomberg's biggest insult to people of faith was the way he handled the 9/11 ceremonies on the tenth anniversary of the bombings. He banned the clergy, from all religions, from participating: He would not allow a priest, minister, rabbi, or imam to make a short statement. He made matters worse when he had the gall to say that “government shouldn't be forcing” religion “down people's throats.” But somehow it was okay for him to shove his secular values down the throats of the faithful.

He was also duplicitous. The same mayor who invoked separation of church and state to institute a gag rule on religious speech was already on record promoting the building of a mosque near Ground Zero. He was entirely understanding of the move by American Atheists to sue New York City over two steel beams shaped like a cross that were found in the debris of the Twin Towers disaster; the atheists objected when the cross was moved from St. Peter's Catholic Church to its new home at the 9/11 Memorial.

Bloomberg's policies on abortion and religious liberty are not known to most Americans. Now that he has set his sights on the White House, it is time his sordid legacy is widely known.

Bill Donohue is president of the Catholic League.