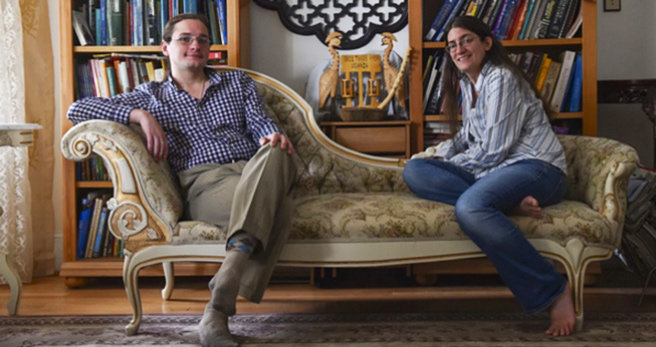 It was all but inevitable. The New Homophiles have finally made the big time, the front page of the Washington Post Style Section, above the fold no less.

Such a story was all but inevitable because it is such a good story. Here is a group of smart, young-to-youngish Catholics and Protestants announcing their unabashed and unashamed “gayness,” yet announcing also their fidelity to Christian sexual morality. No “gay sex” for them.

Such a proposition was tailor-made for a media that is obsessed with all things “gay.” And after you run out of the first gay this, that, and the other, what’s there to write about? Hey, over there, look, they’re “gay” and Catholic but they still have a gripe with the Church? Perfect.

The old problems crop up almost immediately in the piece, and also in Eve Tushnet’s new book Gay and Catholic, and that is narcissism. Tushnet told Boorstein that when she “came out” at 20 in 1998 she thought she was the only woman with same-sex desire living chastely in the Catholic Church. Tushnet would blanche at the notion of narcissism since she and the New Homophiles eschew anything that smells of Freud. Still, to think you are the one and only something—whatever you want to call it—is something.

Tushnet says everyone she knew back in those days rejected the Church ‘s teaching on “gay” sexuality. But the thing is, so does Tushnet. Sure, however regrettably, she accepts that she cannot do whatever two naked women do but she also believes the Church has “gay” sexuality wrong. After all, that is one of the main planks in the New Homophile platform.

Until recently Josh Gonnerman was a student in Toronto. At 29, Gonnerman is still a student, now at Catholic University of America working on a PhD in theology. Of course.

Gonnerman sums up how he sees the Catholic approach to homosexuality as “Oh, sucks for you.” At least that was the way it was before the New Homophiles arrived on the scene. Now, he says, “Celibacy is being reimagined.” Maybe that’s not narcissism again. Maybe no one in the Church understood celibacy as positive, an embracing of the possibilities for apostolate that celibacy opens up for the celibate. Maybe no priest or bishop or PhD student ever thought of that before.

Besides reimagining celibacy, the New Homophiles also invented friendship. They gather at a blog called Spiritual Friendship, a name taken from the beautiful work of the Trappist Aelred of Rievaulx who at least one of the New Homophiles thinks was also “gay.” It is truly a good thing the same-sex attracted have figured out that love can be expressed in ways other than genitally and that God may have had a hand in calling them to those other ways but, minor point, they didn’t invent friendship. At least I don’t think they did.

Conservative Christians, opponents of the gay agenda, opponents particularly of gay marriage, are so eager not to be considered bigots that the New Homophiles are acceptable to them. What a welcome relief. See, we’re not bigots. We like those celibate “gay” Christians! While dialogue and engagement are good things, Christians still need to take a closer look at New Homophile claims.

Yes, they are celibate. Yes, they accept the teaching of the Church on sexual ethics. They are 95 percent there when it comes to Church teaching but, as I have written before, the last 5 percent is a serious problem on which the New Homophiles need to be engaged.

First, the New Homophiles insist on the “gay” identifier. The danger here is being reduced to this thing they’re not. Father Paul Scalia, chairman of the Catholic apostolate Courage, a group roundly disliked by the New Homophiles, wrote an essay at First Things many years ago in which he pointed out that “coming out” as “gay” has the tendency to set someone in “amber” that is especially difficult to get out of. Plus, we know that with help, something the New Homophiles especially eschew, same-sex attraction can change.

Second, the New Homophiles hold that their same-sex attraction was not only given to them by God but that along with the attraction God gave them uniquely “gay” spiritual gifts. Such language was actually used in the first draft of the document at the Extraordinary Synod in October, language quickly excised.

One of these special gifts is supposedly this ability to form close friendships, though from what I have read of refugees, there are fewer lonelier places on earth than in the “gay” community.

Third, the New Homophiles want Church doctrine to change in order to recognize points one and two. Yes, they want the Church to be gay-positive; more than that though, they want Church doctrine to recognize their “gayness” as gifts from God and through their gayness they’ve been given unique spiritual gifts. The New Homophiles will deny all of this, but it is in their now voluminous writings.