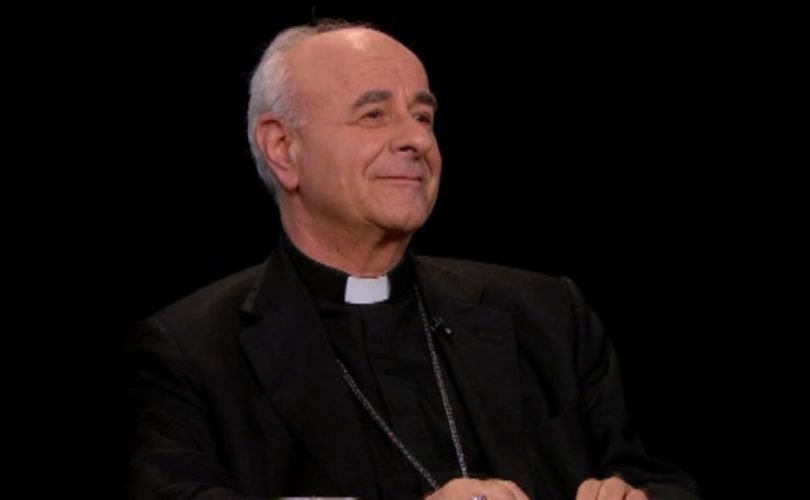 August 13, 2015 (LifeSiteNews) — In recent days, several news reports have come from Europe that are worth presenting to the U.S. Catholic world. The most important event is the publication in Rome of a new book that contains the presentations of an earlier set of seminars hosted – in January, February, and March 2015 – by the Pontifical Council for the Family, which is headed by Archbishop Vicenzo Paglia.

The title of the book is Family and Church: an indissoluble bond, and it is part of the Famiglia e Vita Series directed by Father Gianfranco Grieco. The topics of those lectures were: “Marriage: Faith, Sacrament, Discipline”; “Family, Conjugal Love and Generation”; and “The Wounded Family and Irregular Unions: What Pastoral Attitude?”

As the Italian newspaper La Republicca reported, on July 22, 2015, this book offers new lines of arguments that are purposely made in order to admit “remarried” divorcees to the Sacraments – even if only in a limited way. It says, for example:

A penitential path ad-hoc, let us call it a “via discretionis” [a discreet or discretionary, path], which consents to make it possible that remarried divorcees may have access to the Sacraments of the Eucharist and of Reconciliation. This is the proposal which emerged during a three-day international seminar, behind closed doors, which has been convoked by the Pontifical Council for the Family in light of the upcoming Synod of Bishops in October 2015.

Two theologians, Xavier Lacroix, and Paul De Clerck, propose a procedure where, first, a local priest investigates whether a remarried couple may have grounds for a declaration of nullity of their previous marriage. If this has been proven not to be the case by the courts, the priest might then propose, according to La Repubblica, a “penitential path” (which reminds us of Cardinal Walter Kasper's words). During this process, the persons involved would consider whether they “contributed to the failure of their marriage”; “to be aware that they have trespassed a law of God”; and then, if so, to “come to a reconciliation with one's own past.” The authors of the book speak of a “public character of penitence” which would show that the Church does take the laws of God seriously. But finally, after this process, the “remarried” divorcees would be allowed to receive the Sacraments – at times, perhaps, only partially, only during Easter – in spite of the fact that they have still nonetheless persisted in their state of adultery.

This publication is of grave significance since it has been published and even initiated by the head of the Pontifical Council on the Family, Archbishop Paglia. Paglia himself has in the past also been prominent for his liberal and lax attitude toward homosexuality. On one occasion, he was reported to have praised a TV show, “Modern Family,” in the U.S., in its favorable presentation of a homosexual couple. As the website Crux reported on May 14, 2015:

Along with writings of Pope Francis and other Vatican initiatives, Archbishop Vicenzo Paglia told the United Nations on Thursday that thanks to 'phenomena like the media production “Modern Family,”’ or same-sex marriage initiatives in a significant number of jurisdictions, the family has become the subject of increasingly intense interest and discussion.”

When EWTN's journalist Raymond Arroyo pressed him on it in his The World Over Show on May 21, Paglia did not give a clear answer as to whether he did approve of this show or not. He answered: “This is not the heart of the question.” When asked by Arroyo whether the upcoming Synod will change the doctrine or practice of the Church, Paglia answered: “The doctrine can be enlarged, can be deepened. We do not change, we would like to go deeply, to find good words in order to announce the Gospel of the Family in the world.”

Archbishop Paglia also recently stressed that everybody – all kinds of families – would be welcome at the upcoming World Meeting of Families in Philadelphia, including homosexuals. When asked, Paglia said that nobody should feel excluded, saying, “We are following the 'Instrumentum Laboris’” for the October 2015 Synod “to the letter.”