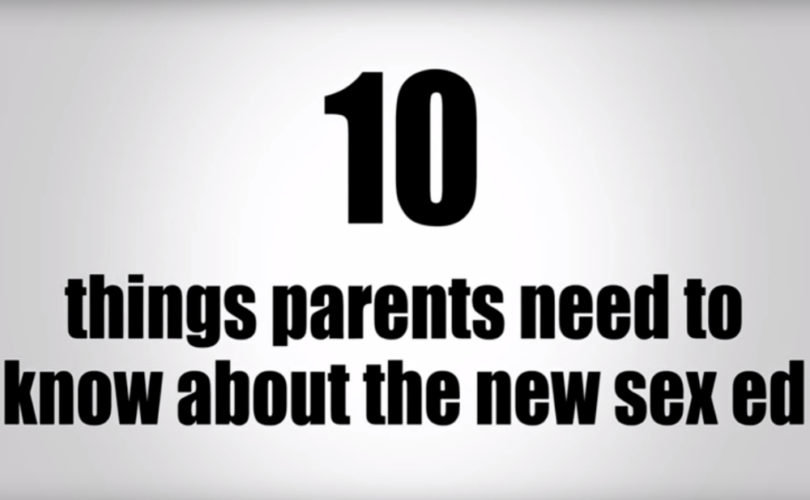 OTTAWA, October 20, 2015 (LifeSiteNews) – The Ontario Liberal government’s new sex ed program for schools ignores marriage and love, and normalizes teen sex while minimizing its risks to health and future relationships, according to a hard-hitting but soft-spoken video released on October 15 by the Institute of Marriage and Family Canada.

The Institute of Marriage and Family Canada, the research arm of Focus on the Family Canada, calls its low-key but dramatic seven-minute expose, “10 things parents need to know about the new sex ed.”

It is as devastatingly on the mark about what is omitted by the curriculum being pushed on Ontario public school children this fall by its lesbian premier Kathleen Wynne, as it is about the damaging lessons contained in it.

Indeed, perhaps sex ed’s gravest offence in the eyes of many Ontario parents with religious values is the IMFC’s eighth indictment, that it omits love and marriage as the proper context for sex, and fails to warn students that teen sexual activity reduces the chances of successful marriage, even though most teens still hope for that.

Parents too are ignored, according to the video’s sixth charge, by the curriculum. For example, while 13-year-old students are advised to draw up a “sex plan and to consult a ‘trusted peer or adult’ about it, parents are not indicated as a resource. This leads to speculation, at the very least, that the curriculum’s authors want Ontario’s students developing values that are different from their parents.”

Significantly, the video asserts with its first point that the curriculum “infringes on parental rights” as guaranteed by the International Covenant on Individual and Civil Rights, of which Canada is a signatory. “Sex ed is not like math or science,” the softspoken female narrator continues. “It teaches values. Values are for the parents to decide.”

But more than that, the video contends, parents are far better at conveying values around sex and relationships than is school-based sex education. While students absorb facts from school lessons, said the IMFC, they do not learn behaviour. On the other hand, children take to heart the lessons they learn from the way their parents behave and from how safe and happy the home life is. The video advises parents to create safe homes where their children can not only raise questions about sexuality, but also discuss what they were just taught about sex in school.