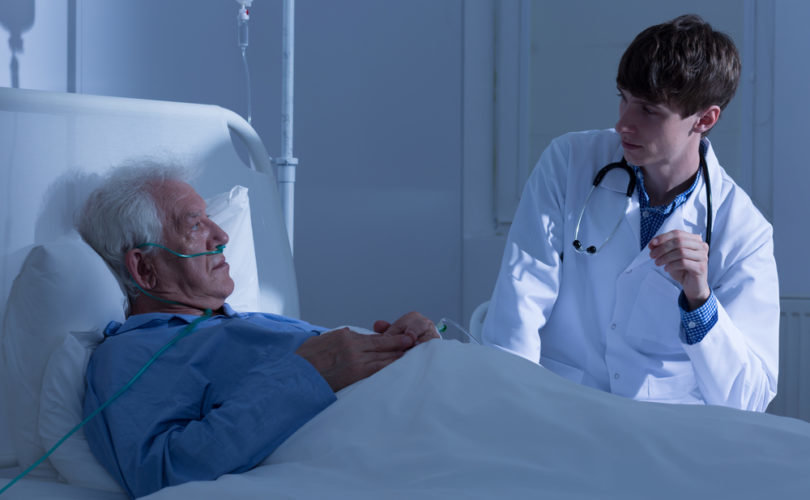 January 7, 2016 (Archdiocese of Washington) — In the coming year it looks as if there will be very aggressive attempts in both courts and legislatures to advance physician-assisted suicide (or as its proponents prefer to call it, the “right to die”). The recent legalization of physician-assisted suicide in California was a sad harbinger of what is being attempted in other states as well. Here in the Archdiocese of Washington, both the D.C. City Council and the Maryland state legislature are debating bills to make it legal.

Thankfully, a rather significant coalition of disabilities advocates, medical professionals, pro-life organizations, and faith communities opposes this so-called “right-to-die” legislation. The American Medical Association (AMA) also opposes euthanasia and physician-assisted suicide, stating that they are “fundamentally incompatible with the physician’s role as healer, would be difficult or impossible to control, and would pose serious societal risks.”

Why should we as Catholics oppose the legalization of assisted suicide/euthanasia? There are many reasons. Some of them are informed by our faith, others are more rooted in natural law or reason, and still others flow from the consequences that would ultimately result from the legalization.

Let’s consider first what the Catechism teaches about euthanasia/assisted suicide:

Those whose lives are diminished or weakened deserve special respect. Sick or handicapped persons should be helped to lead lives as normal as possible. Whatever its motives and means, direct euthanasia [or assisted suicide] consists in putting an end to the lives of handicapped, sick, or dying persons. It is morally unacceptable. Thus an act or omission which, of itself or by intention, causes death in order to eliminate suffering constitutes a murder gravely contrary to the dignity of the human person and to the respect due to the living God, his Creator. The error of judgment into which one can fall in good faith does not change the nature of this murderous act, which must always be forbidden and excluded.

Discontinuing medical procedures that are burdensome, dangerous, extraordinary, or disproportionate to the expected outcome can be legitimate; it is the refusal of “over-zealous” treatment. Here one does not will to cause death; one’s inability to impede it is merely accepted. The decisions should be made by the patient if he is competent and able or, if not, by those legally entitled to act for the patient, whose reasonable will and legitimate interests must always be respected.

Even if death is thought imminent, the ordinary care owed to a sick person cannot be legitimately interrupted (CCC 2277-2279).

Thus the Catechism defines euthanasia/assisted suicide as the intentional ending of a life, whether by direct means such as injection with deadly drugs, or indirectly through the refusal to provide food and/or water. The distinction between euthanasia and assisted suicide lies in who initiates the final act that actually causes death, the patient himself (assisted suicide) or a third party (euthanasia).

One cannot emphasize enough that allowing a person to die by refusing or withdrawing burdensome treatments, or by not providing machines such as ventilators that are unlikely to be therapeutic, is not euthanasia/assisted suicide. Church teaching does not require that one pursue every treatment possible. The patient must discern carefully with information supplied by his medical team along with an assessment of his personal resources—spiritual, psychological, emotional, familial, and financial—whether or not a particular treatment is excessively burdensome. However, even for an imminently dying person, basic care (which usually includes nutrition and hydration, even if administered through a tube) must be provided.

Pain management for those with terminal illnesses, for those with degenerative diseases, and for the dying is allowed and encouraged, even if the medication has the unintended side effect of shortening life. Arguments that dying is too painful and therefore a patient should be euthanized or assisted in dying are not valid, because it is very rare today that pain cannot be managed reasonably through advancements in the growing specialty of palliative care.

Let’s consider some other reasons, both religious and natural, that we should oppose assisted suicide/euthanasia. I’ll begin with the natural reasons that should concern us all, including those of different faiths and those with no faith tradition. Then I’ll move to the religious reasons that should influence us who believe.

There are many more reasons to oppose euthanasia/assisted suicide purely on rational grounds. You can find more of these here: www.noDCSuicide.org.

Now I would like to move on to those reasons that originate from our faith in Jesus Christ.

One of my privileges as a priest is to have accompanied many people on their final journey toward death. I’ve also accompanied their family members. In making these journeys, I have discovered that some of God’s greatest and most necessary work takes place in and during the process of natural death.

Think carefully before you support assisted suicide/euthanasia through some notion of “compassion.” The truest compassion is to want for someone what he or she truly needs in order to be saved. Ultimately, only God can say what this is. We do not have dignity because we can control our own lives; we have dignity because our life is in God’s hands.

The Maryland Catholic Conference and the Washington D.C. Catholic Conference have been working with the coalitions Maryland Against Physician Assisted Suicide (www.stopassistedsuicidemd.org) and No DC Suicide (www.nodcsuicide.org) to warn people about how the bills threatens vulnerable populations, including those who are sick, elderly, disabled, or who lack adequate, affordable healthcare.

Please become informed and act against the legalization of assisted suicide/euthanasia.

Reprinted with permission from the Archdiocese of Washington's blog.