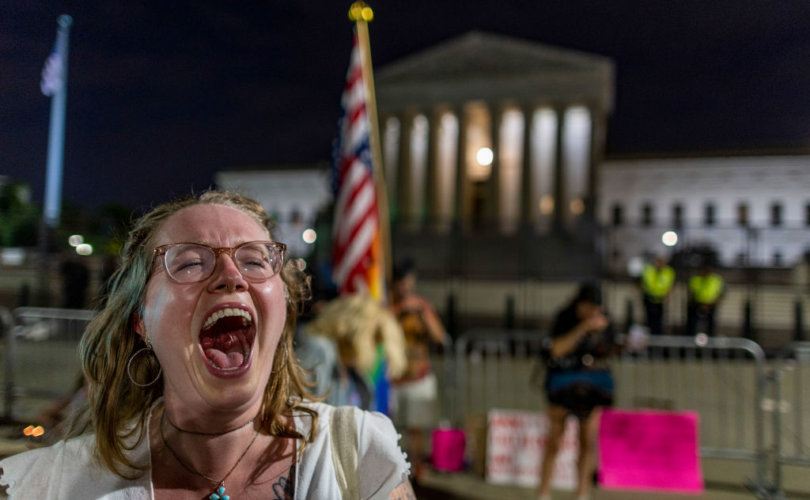 (LifeSiteNews) – One of the strongest contradictions of procured abortion is that the practice is so contrary to maternal instinct. It defies the imagination of all those who have known and revere their mothers.

The intimate connection over the time of pregnancy establishes an undeniable affection between mother and child. Thus, mothers cherish and nurture their children with tenderness and love. In a healthy family, the link is lifelong as all children naturally reciprocate by exalting their mothers. That is the way it should be.

Feminists disagree. However, they find this narrative hard to overcome because it is so natural. Maternal affection has always proven an obstacle to the sexual revolution, which seeks to deprive sexuality of its consequence in children. The ideal of motherhood must be destroyed for true “liberation.” More importantly, the real target is Christianity and the highest manifestation of maternal instinct found in the Blessed Mother.

To facilitate this attack, some feminists now claim maternal instinct is non-feminine. “The science” is coming to the rescue by declaring the maternal instinct to be the creation of fertile and oppressive male imaginations. These feminists say new evidence suggests that motherhood is a social construct that helps men oppress women.

This irrational conclusion is found in a long and outrageous essay in The New York Times titled “Maternal Instinct Is a Myth That Men Created.” The author is Chelsea Conaboy, a journalist specializing in health and the author of the forthcoming book Mother Brain: How Neuroscience Is Rewriting the Story of Parenthood.

Rarely does one see such an explosive mix of pseudo-science, Marxist dialectics and anti-Christian rhetoric. The article is full of resentment and anger. There is nothing spiritual in this assessment. It reduces maternal instinct to neurological impulses. Indeed, nothing is sacred. Motherhood and apple pie are out of fashion, and “birthing people” are in.

The central thesis of the rant is that “the selflessness and tenderness babies require is uniquely ingrained in the biology of women, ready to go at the flip of a switch.” This wrong, simplistic and mechanistic notion of maternal instinct claims men constructed an idea of what a mother should be and not who she actually is.

There is no longer a maternal instinct but a “parental brain.” Ms. Conaboy claims “new research” declares, “The idea of maternal instinct as something innate, automatic and distinctly female is a myth.” However, the author laments that this myth is so persistent that it stubbornly prevails despite the efforts of feminists to debunk it.

Thus, the story of motherhood must be rewritten according to this new research to right the record, liberate oppressed women and facilitate new government policies that favor “the parent,” regardless of “gender.”

A conspiracy in favor of motherhood

The main problem with the author’s new theories is that they are so unbelievable. They contradict what so many experience through their relationships with their mothers. They also coincide with the feminist and Marxist narratives that reduce everything to power and class struggle.

Thus, the facts have a hard time adapting to the narrative. Throughout history, maternal instinct was considered evident even by those who favored social revolution.

The author is outraged, for example, that Charles Darwin could not be trusted to give a proper evolution of the maternal instinct. He may have changed how people view humanity from Bible to biology. However, he failed to “dispel longstanding chauvinistic ideas about women and motherhood.” His forthright observation of animals led him to conclude that the female of the species has a special facility to deal with the young. With horror, she observes that “Darwin codified biblical notions of the inferiority of women and reaffirmed the idea that their primary function is to bear and care for children.”

Capitalism also played its role in reinforcing the maternal instinct by separating women from the workplace and consigning them to “domesticity and consumption.” Men propagated the idea of the “sacredness” of home as a place of refuge from the real world, thus condemning women to the function of motherhood and homemaking.

The experts support the mother

During the twentieth century, “the science” worked against the feminists who complained bitterly that science and evolution were supposed to provide “freedom from stories about virgin mothers and evil temptresses,” as historian Kimberly Hamlin observed in “From Eve to Evolution.”

Instead, most psychoanalysts, psychiatrists and child development experts declared maternal love vital for the child’s emotional and physical development. These experts claimed that only a mother is uniquely gifted to supply the needed support. They supposedly burdened women with maternal guilt when they failed to provide such care.

Even today, maternal instinct finds support in parental advice columns, scientific writing and everyday conversation. Ms. Conaboy admits it is still everywhere, which makes her work all the more urgent.

The real target of the essayist is not to critique the pro-maternal past. She reveals her intentions by using the attack on maternal instinct to push forward the sexual agenda. It seamlessly fits into the liberal program.

Maternal instinct, she rightly observes, can play “a role in driving opposition to birth control and abortion.” She points to the success of the ultrasound machine that relies upon the maternal instinct to dissuade women from abortion. Indeed, pro-lifers note that once the mother sees the image of her child, most find it very difficult to proceed with an abortion.

In addition, the myth of maternal instinct limits parenting to women and sustains “outdated ideas about masculinity.” The telltale sign of an agenda is her criticism that maternal instinct “undermines the rights and recognition of same-sex couples and transgender and non-binary parents, whose ability to care for their children is often questioned.”

However, the real target is Christianity and the Church, which she attacks as creators of social constructs. She goes far beyond the pseudo-science she adores and aims for that which is most sacred.

Christian civilization “created” modern Christian archetypes of motherhood that shaped society and its institution over the centuries. This exalted image of the mother must be eliminated in its highest manifestation, even to the point of blasphemy.

Indeed, the author brutally traces the origin of this myth to the best of all mothers. This Blessed Mother, who only desires the best for her children, is accused of being a model that facilitates the oppression of women.

A shocking target of her rage, the author says the Blessed Virgin Mary “became the most virtue-laden symbol of motherhood there is, her identity entirely eclipsed by the glory of her maternal love.” She claims the Mother of God was a moral model of “unattainable goodness” and “perpetual servitude” that can be “stifling and unforgiving.”

Ms. Conaboy’s insulting article is thus blasphemous and offensive to countless Catholics who revere and venerate Our Lady as their mother. Whoever attacks the Mother offends the Son. By publishing the article, the feminist revolution is unmasked as anti-Christian. This is not science; this is an attack on God, His Holy Mother, and the order of His universe.