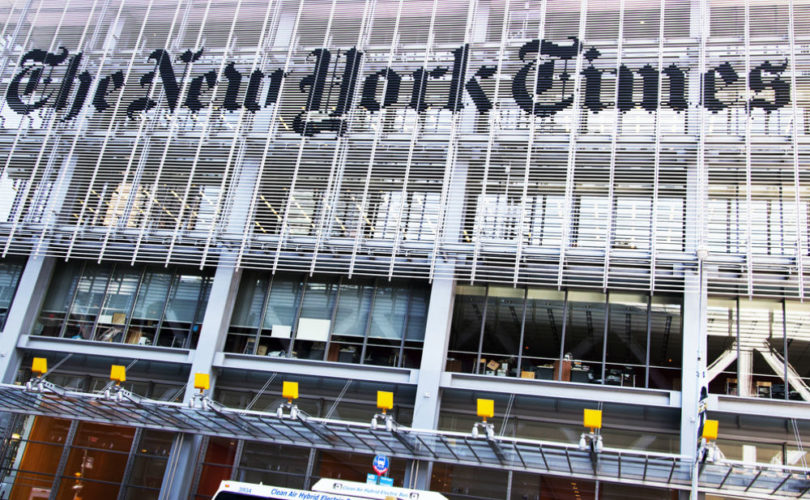 As I recounted Monday at The Daily Signal, The New York Times reporter Josh Barro thinks some people are “unworthy of respect.” Yesterday Barro doubled-down and tweeted back at me that “some people are deserving of incivility.” He argued that I am such a person because of my views about marriage policy. You can see the entire exchange on my twitter page.

What Josh Barro says or does doesn’t really affect me. I’m not a victim, and I’ll keep doing what I do. But incivility, accepted and entrenched, is toxic to a political community. Indeed, civility is essential for political life in a pluralistic society.

It also has deep roots.

The Hebrew Bible tells us that all people are made in the image and likeness of God and have a profound and inherent dignity. Sound philosophy comes to a similar conclusion: as rational beings capable of freedom and love, all human beings have intrinsic and inestimable worth. And so we should always treat people with respect and dignity—we should honor their basic humanity. We should always engage with civility—even when we sharply disagree with them. Faith and reason, the natural law and the divine law, both point to the same conclusion.

Just as I think the best of theology and philosophy point to the conclusion that we should always treat people with respect, so I think they show that marriage is the union of a man and a woman—and that redefining marriage will undermine the political common good.

The work that I’ve done for the past few years for The Heritage Foundation has been at the service of explaining why I think this to be the case. Bookish by nature, I thought the best contribution I could make to public life was to help us think about marriage. So while my early work after college was in philosophy and bioethics, and my graduate coursework was in the history of political philosophy, I put my dissertation about economic and social justice on hold so I could devote myself to this debate at this crucial time.

Along with my co-authors, a classmate of mine from Princeton and a professor of ours there, we set out to write a book making what we considered the best philosophical argument for what marriage is and why it matters. Our book seemed to help the Supreme Court think about the issue, as Justice Samuel Alito cited it twice. The reason I’ve written various and sundry policy papers for Heritage, and traveled across the country speaking on college campuses, and appeared on numerous news shows (including, of course, Piers Morgan) is that I know the only way forward in our national debate about marriage is to make the arguments in as reasonable and civil a spirit as possible.

Some people, like Barro, want to do everything they can to shut down this discussion. They want to demonize those who hold contrary viewpoints. They want to equate us with racists and claim we are unworthy of respect and ought to be treated with incivility. This is how bullies behave. In all of recorded history, ours is the first time where we can have open and honest conversations about same-sex attraction and marriage. This discussion is just beginning. It is nowhere near being over.

All our fellow citizens, including those identifying as LGBT, should enjoy the full panoply of civil rights—the free exercise of religion, freedoms of speech and press, the right to own property and enter into contracts, the right to vote and have a fair trial, and every other freedom to live as they choose, consistent with the common good.

We make our arguments, in many fora, as transparently as possible. We welcome counterarguments. And we strive to treat all people with the dignity and respect they deserve as we carry on this conversation.

One of the most unfortunate parts of my exchange with Barro last night was his reaction toward those who identify as LGBT and aspire to lives of chastity. They freely choose to live by their conviction that sex is reserved for the marital bond of a husband and wife. Some of them also seek professional help in dealing with and perhaps even diminishing (not repressing) their same-sex sexual desires.

I have written in their defense and against government coercion that would prevent them from receiving the help they desire, as New Jersey and California have done. Barro describes my support for their freedom as “sowing misery…doing a bad thing to people…making the world worse.”

There really is anti-LGBT bigotry in the world. But Barro does a disservice to his cause when he lumps in reasonable debates about marriage policy and the pastoral care that some same-sex attracted persons voluntarily seek out as, in his words, “anti-LGBT.” If we can’t draw a line between real bigotry and reasonable disagreement, we’re not helping anyone.

This debate isn’t about restricting anyone’s personal freedom. However it goes, people will remain free to live their romantic lives as they choose. So too people who experience same-sex attraction but aspire to chastity should be free to lead their lives in line with their beliefs, and to seek out the help they desire. We can have a civil conversation about which course of action is best—but let’s leave aside the extremism.

Barro asks, “Why shouldn’t I call you names?” My answer is simple: you should not practice the disdain and contempt you claim to abhor.

All my life, I’ve been educated at left-leaning institutions. Most of my friends disagree with me about these issues. But they’re still friends. And their feedback has made me a better person.

My final tweet to Barro is where I still remain committed: “people on all sides of LGBT debates and marriage debates need to find a way to discuss these issues without demonizing anyone.”

Reprinted with permission from the Daily Signal, where you can find Ryan Anderson's Twitter exchange with Barro.