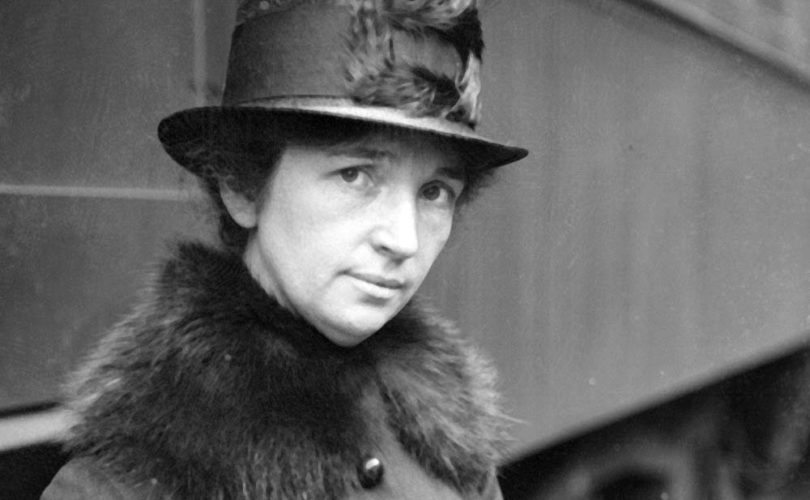 A New York Times writer argued that Margaret Sanger should be on the twenty-dollar bill to 'remind us of what she has done for women and our reproductive health.'

March 23, 2015 (NewsBusters.org) — Planned Parenthood founder Margaret Sanger is revered by liberal journalists – but a new NYT blog has taken its praise to a whole new level.

Roxane Gay, Purdue University professor and Bad Feminist author, wrote a March 18 piece for the New York Times Opinion pages entitled, “Margaret Sanger, a Women’s Fighter.” In it Gay argued that the Planned Parenthood founder should appear on the twenty-dollar bill to “remind us of what she has done for women and our reproductive health” as well as “how the fight for reproductive freedom is an ongoing one.”

While Sanger “was not without her controversies,” Gay argued, “neither were any of the men who currently grace our currency.” “We need this reminder now, more than ever,” she argued.

Gay credited Sanger for “introduce[ing] the idea of birth control into our culture at large” and “free[ing] women from indenture to their bodies.” With her work, Gay argued, Sanger “eventually normalized the discourse about women’s bodies and fertility so women could decide not only when, but if, they would have children.”

(She didn’t mention Sanger once described birth control as “nothing more or less than the facilitation of the process of weeding out the unfit” for a “cleaner race.” Not the most appealing topic.)

“No longer were women’s bodies subject — politically, personally, or medically — to the whims of men,” she continued.

She recognized Sanger’s creation of the American Birth Control League which later inspired Planned Parenthood, an organization “which continues to serve women and men, offering preventive healthcare, testing for sexually transmitted diseases, and reproductive counseling.” And, she forgot to add, abortion – the destruction of babies in the womb by the hundreds of thousands each year.

But maybe that’s because Gay’s next rant was about abortion – which Margaret Sanger opposed. Speaking at a birth control conference in 1925, Sanger argued, “Human society must protect its children–yes, but prenatal care is most essential! The child-to-be, as yet not called into being, has rights no less imperative.” Sanger’s autobiography also reads, “To each group we explained simply what contraception was; that abortion was the wrong way—no matter how early it was performed it was taking life.”

But Gay put that aside as she warned of the “recent legislative attacks on reproductive freedom” – or, in other words, abortion, abortion, abortion. “20-week abortion bans, mandatory ultrasounds for women seeking abortions, and unreasonable medical facility restrictions placed on abortion clinics,” Gay said, “are an unfortunate reminder that despite Margaret Sanger’s efforts, women are perilously close to becoming once more indentured to their bodies.”

She concluded by citing the Supreme Court’s Hobby Lobby ruling and how “we’re also seeing a strange cultural backlash against birth control.”