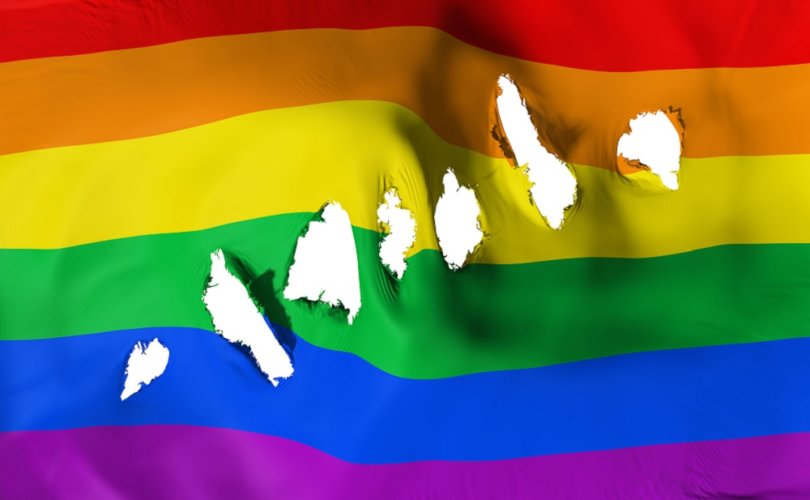 “Do you want your future children taught ‘LGBT’ history lessons?”

That’s essentially the question (along with others) presented to young Americans 18 to 34 in a recent Harris poll. Their responses have  “LGBT” activists in a tizzy — and many conservatives predicting a hopeful new era in social engineering reality.

Support for normalizing homosexuality and gender confusion is dropping like a stone among young adults. The majority still expresses support for generalized “equal rights,” but apparently some have learned what devils are in these details.

They wonder, doesn’t this first generation raised under “gay” indoctrination get it? Haven’t these people been subjected to numerous anti-bullying lessons in school, obediently learning that homosexuality is inborn (despite evidence to the contrary)?

Didn’t they see their school’s “gay-straight alliance” (or “genders and sexualities alliance”) in full activist mode, with perennial permission to post rainbow flyers throughout the halls and broadcast chirpy “pride” announcements on the P.A. system?

Don’t they remember the “safe space” pink triangles on teachers’ and counselors’ doors where a “gay”-inclined or gender-bending student could meet in private with an affirming adult willing to withhold this life-changing information from parents?

Weren’t they around for the “Day of Silence” in schools each April, where sexual rebels and their allies could spend a day pretending they have no influence or voice in America? And that their dysfunction and distress is the fault of Christians and their businesses, like bakeries; florists; and Chick-Fil-A, vandalized by tolerant homosexuals during the recent New York City “pride” parade?

Maybe that’s the problem. Young Americans have seen all this and are not impressed.

I speak on the “LGBT” agenda in classes of public school seniors several times a year, and here’s what I think is going on.

1. Kids have learned about bullies and see “LGBTQ” tyranny for what it is: hypocrisy. These folks talk the talk but don’t walk the walk. Their identities must be affirmed, but there’s no sympathy for girls who don’t want strange males in their bathrooms or boys who are taunted by mean “gay” guys. Young people are tired of being called bigots if they want privacy or want to be treated with respect for their own preferences and moral objections.

2. Today’s youths hate phonies. And let’s face it: those involved in homosexual behavior and those pretending to be the opposite sex are huge pretenders.

An example is “LGBT history” propaganda. Many of today’s 21-year-olds were subjected to this mythology in high school, with speculation that Abraham Lincoln, the Apostle Paul, Eleanor Roosevelt, and others were closeted “gays.” And that we should consider pederast Harvey Milk and Bruce Jenner heroes and worthy role models. They are not buying it and don’t want their children subjected to this nonsense.

3. Mean behavior is getting a pushback. I’ve heard from many parents over the years who relate their kids’ mistreatment by empowered groups of homosexual students and teachers in their schools. Even the slightest disagreement with their agenda often results in mocking, scoffing, rumor-spreading, and harassment. The more influence in schools the “LGBTQ” crowd gets, the fewer boundaries of decency and civility they honor. And in college,  this vicious treatment goes on steroids. Many are fed up with being treated like second-class citizens or watching others treated in this way.

4. The ugliness is front and center. Let’s face it: effeminate teen boys and butch teen girls are not appealing to the mainstream student. They are, again, inauthentic and a physically compromised version of the best that young person could be. Something has altered such a person’s perceptions and mannerisms, and it usually doesn’t come off attractively. And it’s so sad, because these kids could have a whole different adolescent experience, but instead of getting truth-based counseling, they are being deceived by manipulative adults.

The gender-confused person is even more of a caricature. Most heterosexual kids want to avoid the female-to-male gender rebel and all “drag queens.” They find this disordered behavior repulsive.

And they have a right to do so. It’s a natural, protective reaction and an outgrowth of common sense. We are created by God to be our real selves, not our “real” delusions.

5. The gender pretense movement is a bridge too far. Just as parents coast to coast are rising up against “Drag 101” and the pedophilic “story hours” in tax-funded libraries, teens and young adults are not impressed with what they see exhibited in the gender agenda. The addition of “transgender” lunacy and the demand for instant affirmation is opening lots of eyes to this entire movement with its excesses and disrespectfulness.

If the people running the Human Rights Campaign were smart, they would drop the gender rebellion issue from their “rights” coalition. So would GLSEN. But don’t look for that to happen, because these days, that’s where much of the big funding is.

Advocates blame a toxic culture for the drop in support and claim there’s a rise in violence against homosexuals and “transgenders.” Most cultural hostility today is fomented and sustained by the left, however. And most of these crimes turn out to be personal disputes, or not physical conflict, but verbal insults, or “gay-on-gay” attacks, so not really fulfilling the definition of a hate crime.

Unless verified by a police report, the alleged incidents are sometimes hoaxes. Jussie Smollett comes to mind.

These “rights” have no depth. It’s a house of cards and has been all along. That is why it will crash, now or later.

And maybe the first generation to be fully awash in homosexual indoctrination is ready to step out of the mud and take a bath in truth.

Hopefully the trend toward reality continues until we stop normalizing this deviance throughout America and start conveying the most positive message we could give: “No way.”

And then, follow up by showing these lost people how God can change anyone who wants His help.