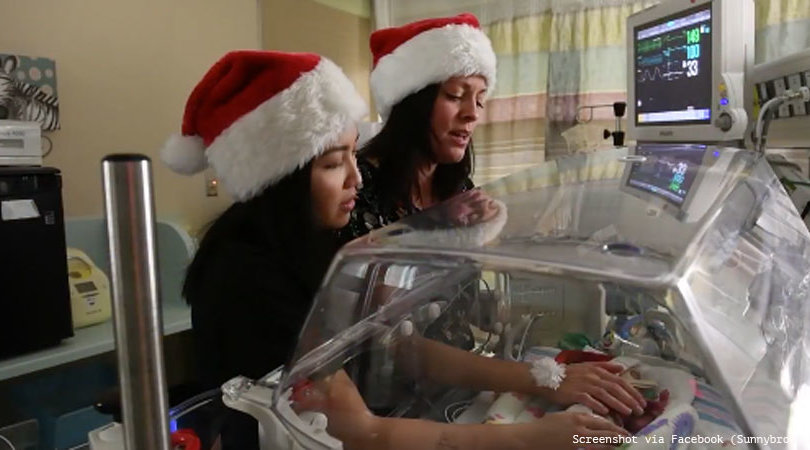 Two NICU nurses sing to soothe the premature babies in their care.

January 5, 2017 (LiveActionNews) — Two nurses working in the neonatal intensive care unit (NICU) of Toronto’s Sunnybrook Health Sciences Center are using their gift of singing to soothe the premature babies in their care. Earlier last month, two-day-old preemie Anya was serenaded by the nurses, Marieneth Montenegro and Lisa Sampson, who sang a tender rendition of Have Yourself A Merry Little Christmas.

On Dec. 21, Sunnybrook Health Sciences Center shared the 1-minute video on social media, and it has quickly generated an overwhelming response.

“Babies love voices,” parent co-ordinator Kate Robson told CBC Toronto, “and they love singing, and it’s something we try to encourage… It calms them and it de-stresses them.”

In fact, preborn children can hear from inside the mother’s womb long before they are born (or not so long, in the case of babies like Anya, who arrived very early). A study published in 2013 found “direct neural evidence that neural memory traces are formed by auditory learning prior to birth.” Research on prenatal auditory development has led doctors to encourage parents to read, sing, or talk to their children in utero and to continue this vocal communication throughout childhood for optimal development.

While nurses like Montenegro and Sampson work to provide optimal outcomes for children born prior to their due dates, Canadian abortion law (similar to that of the United States) permits taking the lives of babies like Anya at any point in pregnancy.

The stark contrast between medical care offered to a baby whose life was protected and the brutal dismemberment suffered by babies of the same gestational age who were deemed disposable is jarring. Pro-life groups, such as the Canadian Center for Bioethical Reform, work tirelessly so that more babies like Anya will be protected and cherished, as all humans deserve.