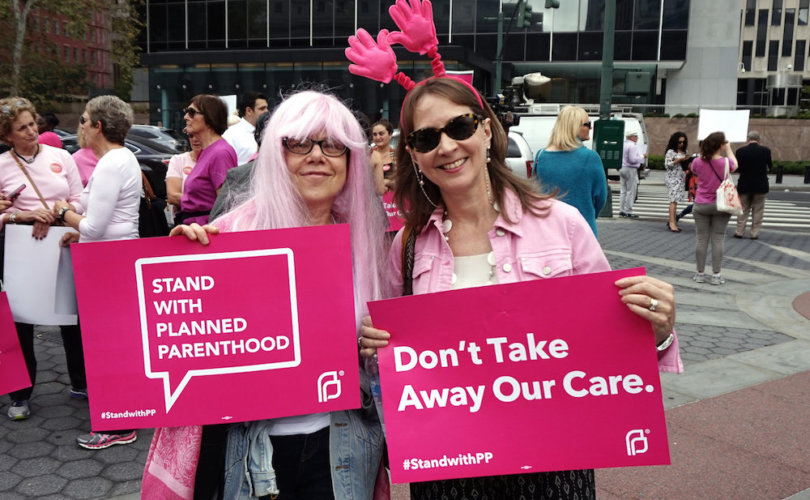 Pro-abortion activists now want to parade around with #FakeClinic signs in front of pregnancy care centers repeating every possible lie they can from NARAL ProChoice America? The hanger-wavingradical pro-abortion group knows a lot about lying. It's who they are. It's why their co-founder, the late Dr. Bernard Nathanson, called them out for deliberate deception about abortion statistics to sell the lie of abortion to the American public. Dr. Nathanson, once responsible for overseeing 75,000 abortions (5,000 he committed himself including the abortion of his own child) became pro-life and spent the rest of his life educating and unequivocally proclaiming that “all abortion is violence“.

“Having an abortion doesn't increase your risk for breast cancer or affect your fertility. It doesn't cause problems for future pregnancies like birth defects, premature birth or low birth weight, ectopic pregnancy, miscarriage, or infant death.” This blatant dishonesty is from Planned Parenthood, the nation's leading #fakehealth network.

First trimester induced abortion is a “known immutable medical risk factor associated with preterm birth” according to the Institute of Medicine of the National Academies of Science. Although they did stick this inconvenient truth onto page 625 of a 772 page study, “Preterm Births: Causes, Consequence, and Prevention”.

A meta-analysis of 49 studies, published in the Journal of American Physicians and Surgeons, shows a “statistically significant increase in PTB [preterm birth] risk in women with a history of IA [induced abortion].”

According to the CDC, 17% of infant deaths in the United States are due to preterm births and low birth weight. “Babies born too early (especially before 32 weeks) have higher rates of death and disability,” explains the CDC. Those who survive preterm births often experience breathing problems, feeding difficulties, cerebral palsy, developmental delays, vision and hearing problems. Out of 23,455 infant deaths in 2015, there were 4,084 deaths due to “disorders related to short gestation and low birth rate.”

Studies have shown preterm births among black women are three times higher than whites and Hispanics. The CDC reports that black women's abortion rates are three times higher than whites. So what does Planned Parenthood do? In its typical racially targeting manner, the billion-dollar abortion giant tweeted: “If you're a Black woman in America, it's statistically safer to have an abortion than to carry a pregnancy to term or give birth.” By the way, if President Trump had tweeted that, there would've been an absolute national #fakenews media uproar and charges of “white supremacy” and “racism”. But since an organization that kills (disproportionately black lives) for a living said it, “Go Feminism!”

“Specifically, older age, family history of breast cancer, earlier menarche age, induced abortion, and OC [oral contraceptive] use were associated with an increased risk of breast cancer,” concluded a landmark 2009 study conducted by the National Cancer Institute's own (now retired) branch chief, Louise Brinton. The study, Risk Factors for Triple-Negative Breast Cancer in Women Under Age 45 is completely suppressed by the National Cancer Institute. The taxpayer-funded governmental agency falsely claims there are no valid studies on the link between induced abortion and breast cancer (ABC link) since the 1990s (which they claim are all flawed). There are 29 studies from 2000-2018 that show a positive correlation between abortion and breast cancer, the majority (18) of which are statistically significant.

Let's remember that Planned Parenthood founder and leading eugenicist, Margaret Sanger, definedbirth control like this: “Birth control itself, often denounced as a violation of natural law, is nothing more or less than the facilitation of the process of weeding out the unfit, of preventing the birth of defectives or of those who will become defectives.” This is just vile. The nation's largest abortion chain, spawned in eugenic racism and elitism, thought they could, and should, control the population. So the next time someone tries to claim birth control is about women's rights, let's remember the pseudoscience that motivated the mother of the movement.

Despite the fact that Planned Parenthood constantly likes comparing the abortion of a child to having a tooth pulled, there are no support groups for those who've had their wisdom teeth yanked. But there are many networks of post-abortive ministries dedicated to help, heal and restore women and men devastated by the irreplaceable loss abortion causes. Wisdom illuminates that an abortionist killing someone's unborn child will have adverse effects. And science reveals that truth. In a study published in the Journal of American Physicians and Surgeons, 73.8% of post-abortive women surveyed “experienced at least subtle forms of pressure to terminate their pregnancies.” Another 58.3% reported having an abortion to “make others happy”. Sixty-six percent “knew in their hearts that they were making a mistake.” How could there not be consequences? According to another study on Abortion and Mental Health, there was a drastic 81% increased risk of mental health problems, with nearly 10% directly attributed to abortion.

Despite the distortions of “professional” medical organizations like the American Psychological Association (APA) and the American College of Obstetricians and Gynecologists (ACOG), Americans need to realize that politics often trumps principles, like adherence to sound scientific evidence. (By the way, I highly recommend The American College of Pro-life Obstetricians and Gynecologists, or AAPLOG, for the scientific facts about abortion and reproductive health.) Pro-abortion organizations like APA and ACOG align with an industry that is willing to accept any collateral damage in order to protect an abortionist's unrestricted “right”, up until the moment of birth, to kill someone's child. Pro-abortion activists work zealously to anesthetize the public to what abortion really is – a violent and corrupt billion dollar business merely posing as healthcare.