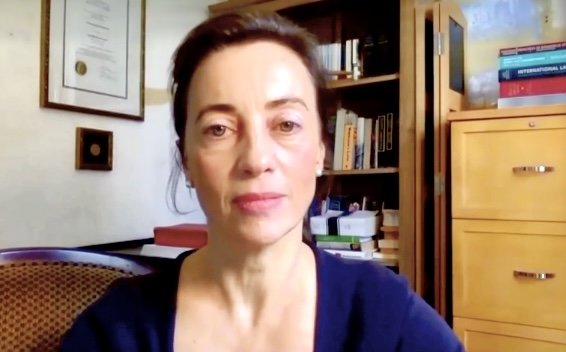 (LifeSiteNews) – Courageous Canadian ethicist Dr. Julie Ponesse recently joined Catholic Conservative television host Tanya Granic Allen on her show The Counterpoint, where she argued that informed consent is largely nonexistent regarding the COVID jabs for a number of reasons. She discussed with the host that the level of fear and coercion has made it virtually impossible for someone to freely agree to a medical procedure.

In essence, it was her argument – with which I concur – that mandating vaccinations for full participation in society is an act of coercion that renders informed and free consent impossible. She told the host: “To be quite honest with you, I don’t think that any Canadian who has received one of the COVID shots so far has been able to give fully informed consent.”

For many, this will be a controversial statement, but Dr. Ponesse is no stranger to controversy.

Recently, Dr. Ponesse was let go from her long-standing position at Huron College of Western University in London, Ontario. She spoke out against the mandated vaccination policy that was enacted at Western/Huron like it has been at most other schools in the province of Ontario.

In a video that went viral, the philosophy professor explained that mandating vaccinations – especially in regard to a highly survivable disease – is unethical, to say the least. She clarified that she was not “anti-vax” and did not object to taking certain vaccines if she believed it was a viable option for a given circumstance.

Her background as a scholar is in ancient philosophy, which is evidenced by her natural law approach to arguments concerning moral and ethical questions. I am not aware of her religious beliefs, but I do know that she has no issue cozying up to conservative Christian pastors like Rev. Dr. Charles McVety, president of Canada Christian College. She also has no issue sharing a stage, even if just virtual, with outspoken conservative pundit Glenn Beck; the two will speak at a Rebel News event on October 28.

The reason I bring up her philosophical chops and her willingness to engage to conservatives and devout Christians is because it matters if we are to understand how she sees the world. Again, I make no claims of her full beliefs outside of what she has said, but I can see that she is a clearly sane person.

I say sane in the most technical of ways, in that she has a grasp of reality that jibes with lived reality and unchanging ethical truths. She does not pretend – as the political and religious Left does – that truth can change with a dictate from a politician or celebrity. It is insane – not in line with reality – to believe that unchanging truth can simply change, and that we can ignore fundamental natural realities with changing political fashions.

In the early 20th century, famed Christian author G.K. Chesterton wrote a landmark book entitled Orthodoxy. Written with the most engaging Chestertonian prose, he wrote something of an autobiography of his state of mind and psychological development. He began the book by explaining that it was his quest for sanity that led him to disregard the changing and vapid materialist philosophies of the modern age.

Throughout his journey for sanity, he ended up becoming a Christian, first with the Church of England, then eventually with the Roman Catholic Church. It was his contention that Christianity is ultimately the sanest thing a person can embrace, because it accounts for the fullness of human nature and gives the most complete analysis of how we are to make sense of everything from free will to suffering to joy to loss to love to sin and to redemption. All of this is to say nothing of the historical claims and spiritual truth of the Christian religion, which he also discovered.

Regarding the sanity behind Christianity, Jordan Peterson agrees with Chesterton. In one interview, the famous Canadian psychologist stated that Catholicism is “as sane as people get!” It is not clear what Peterson believes about the supernatural reality of the faith, although it seems that he is edging toward Rome. Please, God, make it true.

Peterson, like Ponesse, is a well-rounded thinker and entertains the fullness of human thought and regards certain truths as unchanging. I am not sure if Peterson would call himself a “natural law” thinker, but my impression of him is that he seeks to follow an idea all the way to the root, to the point where something axiomatic and unchanging exists, as if planted by God. I believe this is why, although Peterson does harbor some ideas that are not consistent with Christianity – especially regarding evolution – he is respected and admired by those who also view the world through the lens of natural law.

Dr. Ponesse is forthright and erudite in the explanations of her thoughts – she must have been a wonderful professor – and she clarified her comments to Granic Allen. She explained that she believes Canadians have been given a “façade or the appearance of informed consent,” largely due to the fact that most vaccinations have been done so quickly and without proper explanation of what they contain. In addition, there are not long-term studies that can give us accurate information about what any side effects might be down the road.

“Most people that I have spoken to who have gotten one of the vaccines say ‘well you know I went to the pharmacy, I was given a form, it said something about consent on it, I signed it, therefore I gave informed consent,” she said. This might count as (dubious) legal consent, but it is definitely not indicative of informed consent.

Ponesse rightly elaborated that the shots are still in their trial phase until 2023, so the notion that anyone could give fully informed consent to a medication that has not been fully vetted is absurd. It is really quite simple: Vaccinations take a long time to develop, there is no long-term data; therefore, the full effects are not known; therefore, full consent to all that lies in the wake of the vaccine cannot be given.

Is if from a lab? A bat? Is it the plague? A cold? Is Delta bad? Is it weaker? Is there a long COVID? A medium COVID? Maybe a short COVID? How many have actually died from it? Has it truly been isolated? Is it novel or is that a lie from a globalist-communist new world order? Have we had it for years? Etc.

This is to say nothing of the misinformation that has been peddled about early treatments that are proven to be helpful.

Considering that many who have taken the jab have not given any thought to the severity of the virus beyond what the propaganda – or mainstream media – has told them … are they consenting to an experimental vaccine to fight a disease that really only exists in their minds?

What I mean is, if someone were to believe, as many do, that COVID is the plague, then their consent cannot be full because they do not have the full truth.

Many of us might consent to an experimental medical procedure with comparatively low chance of harmful effects if we were facing a disease that we believed was a death sentence. But if we have been lied to – which we clearly have – about COVID, then people are consenting to an experimental drug with harmful side effects because of a false notion that they are facing a disease that will take them out if they do not do what the TV tells them.

Now, some may argue that it was their doctor who told them to take the jab, therefore they consented fully. I’m sorry, but whatever happened to the time-tested notion of getting a second opinion? Are we now in an era where the general practitioner, who is often encouraged by a slew of propaganda and coercion from his own professional association, is somehow a divine oracle that should be trusted without taking a second look?

“It must be said as well, doctors are not infallible, and there have been many times in history when whole associations of doctors have been wrong about very serious matters. Also, we mustn’t look further than the participation of physicians in the Nazi movement who OK’d everything from forced experimentation to eugenical sterilization. Our beloved doctors could not be so susceptible to political pressure or the temptation to be in control … could they?

Adding to the fact that virtually no one has been given the full knowledge about the disease or the long-term effects of the jab is the fact that we have not been free to make an informed decision.

If you are worried about your job or seeing you mother in a nursing home or traveling or finishing education or playing the sport you love so much or anything else that has been threatened if you don’t consent to an experimental jab, then you have not made a free decision.

Sure, you might have made a decision with your free will, but then again, the cashier who hands over the money to the crack-head brandishing a gun has also made the decision to do so as well – but it was not a free decision.

A young man I know recently told me about a conversation he had with a group of his peers – all in their early 20s – at a gathering. He asked if the dozens of people in the room were vaccinated, and almost all said “yes.” He then asked why, and not one said it was for reasons of health. Most mentioned travel or work, finishing school, or even going to the gym. Now, I do not doubt that all of those things were very important to the people, which is why they made the choice they did … but we are talking about medication, not something that should act as a “get out of jail free card” for participation in society.

A few years ago, the telecommunication authority in Canada changed the laws surrounding contracts for cellphone plans. I used to work for a mobile phone provider, and I can tell you that this was a good change, because nobody ever read the whole contract. It was 5-6 pages long with small print and legalize/technical language. Customers consented to things they did not fully understand every day, because they wanted a phone, or in many cases were told they needed a phone, so they “signed their life away.”

If it was deemed unreasonable for a Canadian to consent to a lengthy phone contract, how much more unreasonable and immoral is it to have someone “consent” to a jab that has no long-term testing; that is for a disease that has been overblown so that they can participate in society without being a second-class citizen?

One day, when the dust settles, this period of medical criminality will be studied as one of the biggest ethical gaffes in history.