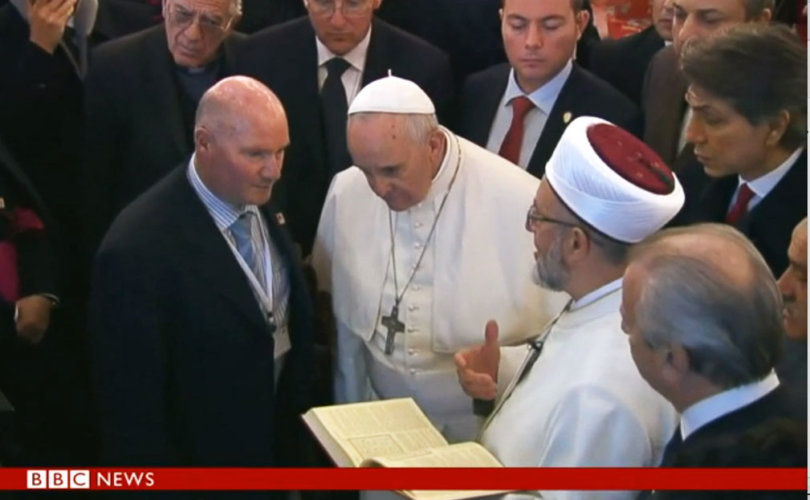 January 16, 2019 (Turning Point Project) – Note: In preparation for Pope Francis's visit to Morocco, the Vatican has released a combined cross and crescent logo. Some have suggested that the blending of the two religious symbols is reminiscent of “Tashlan”–the hybrid religion described in C.S. Lewis's book The Last Battle. Here, from a previous article, are my own thoughts on Tashlan.

Believe it or not, there really is a religious movement called “Chrislam.” It began in Nigeria in the 1980s as an attempt to foster peace between Muslims and Christians by blending elements of Islam and Christianity. Its followers stress the commonalities between the two faiths and they recognize both the Koran and the Bible as holy texts.

Although Chrislam has supposedly spread outside of Africa, it appears to be a relatively small movement. There is, however, a much larger worldwide movement which can in a sense be considered a form of Chrislam. Its adherents minimize the differences between Islam and Christianity, and they describe themselves as “people of the book” and members of the “Abrahamic faith tradition.” The main ritual of the Chrislamites is the dialog – a ceremony that will serve, they hope, to build bridges between the two faiths. People who are dubious about these bridge-building efforts are dismissed as “bigots” and “Islamophobes.”

Catholics, in particular, are highly susceptible to the allure of Chrislamism. Many of them feel that a reconciliation between Islam and Catholicism is possible. They are fond of saying that “we all worship the same God,” and they invariably cite the passage in the Catholic Catechism which says, “together with us, they [Muslims] adore the one merciful God” (841). Catholics also point to the longer passage in Nostra Aetate which says much the same thing and adds that Muslims revere Jesus, honor Mary, and value the moral life.

While it's certainly true that Muslims and Christians can live together in peace, the hope that a bridge can be built between the two religions may be a bridge too far.

One of the most interesting commentaries on the subject was published in 1956 in, of all things, a children's book. C.S. Lewis addressed the possibility of finding common ground with Islam in The Last Battle, the final book in The Chronicles of Narnia. Lewis doesn't use the term “Islam” and “Christianity” in his fictional account, but it's quite obvious to an adult reader that the Narnians are meant to represent Christians, and their enemies, the Calormenes, are meant to represent Muslims. For those in doubt on this point, the Islamic nature of Calormene society is more fully established in Lewis's earlier book, The Horse and His Boy.

The main storyline unfolds quickly. Having fallen into a state of decline and ignorance, many of the Narnians are deceived into believing that their God, Aslan, and Tash, the demonic God of the Calormenes, have much in common. “Tash” and “Aslan,” they are told, are only two different names for the same God:

All that old idea of us being right and the Calormenes wrong is silly. We know better now. The Calormenes use different words but we all mean the same thing. Tash and Aslan are only two different names for you know Who. That's why there can never be any quarrel between them. Tash is Aslan: Aslan is Tash.

After a while, the hybrid God is simply referred to as “Tashlan.” As time passes, however, the worship of Tashlan becomes for all intents and purposes the worship of Tash, and the Narnians find themselves enslaved by the Calormenes.

Lewis's story provides some much needed perspective on the question of whether Christians and Muslims worship the same God. The quandary for Christians is that, although the Allah of Islam is different in major respects from the Christian concept of God, no one wants to deny Muslims a place among the family of believers. After all, Muslims profess to hold the faith of Abraham, and many are undeniably sincere in their desire to serve God. Saying that they don't worship the one God sounds too much like saying that their prayers are wasted. Thus, a good many Christians resolve the quandary by ignoring the theological difficulties and focusing instead on the worthy acts and prayers of Muslims.

Lewis, however, is quite clear about the theological problem, and he has no use for the Chrislam – or, as he puts it, the “Tashlan” solution. He sees no possibility of a reconciliation between the two faiths because Tash and Aslan are of radically “different kinds.” They are, in fact, “opposites.”

But that doesn't mean that Calormenes can't be sincere seekers of God. One character in the story that stands out is Emeth, a young Calormene officer who has sought to serve Tash all his days, and whose great desire is “to know more of him.” Emeth's nobility is so evident that one of the Narnians remarks that “he is worthy of a better God than Tash.”

When Emeth finally encounters the true God, Aslan, he is abashed at his former service to Tash. Here is his narration:

But I said, Alas Lord, I am no son of thine but the servant of Tash. He answered, Child, all the service thou hast done to Tash, I account as service done to me… Not because he and I are one, but because we are opposites, I take to me the services which thou hast done to him. For I and he are of such different kinds that no service which is vile can be done to me, and none which is not vile can be done to him. Therefore if any man swear by Tash and keep his oath for the oath's sake, it is by me that he has truly sworn, though he know it not, and it is I who reward him. And if any man do a cruelty in my name, then, though he says the name Aslan, it is Tash whom he serves and by Tash his deed is accepted.

This passage is somewhat reminiscent of St. Paul's comments on discovering an altar dedicated “to an Unknown God.” He tells the men of Athens that the God they seek in ignorance is the one true God. Not coincidentally, the Catholic Catechism alludes to the same verse almost immediately after paragraph 841 – the passage about the Muslim adoration of God:

843 The Catholic Church recognizes in other religions that search, among shadows and images, for the God who is unknown yet near since he gives life and breath and all things and wants all men to be saved. Thus, the Church considers all goodness and truth found in these religions as “a preparation for the Gospel and given by him who enlightens all men that they may at length have life.”

The statement on the Muslims (841) needs to be read in the context of the statement on the God who is yet unknown (843). In short, whatever “goodness and truth” there is in Islam comes not through Allah, but “is given by him who enlightens all men.” The theme that salvation comes through Christ and his Church is reinforced in paragraph 845 which states that the Church is prefigured by Noah's ark, “which alone saves from the flood.” However, as in Lewis's story, a good deal of allowance is made for those who are ignorant of Christ. Paragraph 847 could almost be a description of Emeth's situation:

Those who, through no fault of their own, do not know the Gospel of Christ or his Church, but who nevertheless seek God with a sincere heart, and, moved by grace, try in their actions to do his will as they know it through the dictates of their conscience – those too may achieve eternal salvation.

The God that is described in the Koran is different in important respects from the Christian God. The differences are so radical that it would be a mistake to call them the same God. However, it is still possible to say that Muslims worship the one God, in so far as they “seek God with a sincere heart,” and try “to do his will as they know it through the dictates of their conscience” (847). Or, as Lewis puts it, “therefore if any man swear by Tash and keep his oath for the oath's sake, it is by me that he has truly sworn, though he know it not…”

It's significant that this section of the Catechism also contains a discussion of the doctrine, “Outside the Church there is no salvation.” Paragraph 846 asks “How are we to understand this affirmation, often repeated by the Church Fathers? Reformulated positively, it means that all salvation comes from Christ the Head through the Church which is His Body.” Why does Extra Ecclesiam Nulla Salus need to be “formulated positively”? The reason, of course, is that the doctrine has often been understood in a narrow, literal way. Down through the ages, not a few Catholics have interpreted it to mean that those who attend non-Catholic Churches go to hell.

Most Catholics, I think, would now admit that Extra Ecclesiam Nulla Salus was not the most felicitous way of stating the doctrine. Is it also the case that paragraph 841 is not the best possible way of formulating “the Church's relationship with the Muslims”? A lot of confusion currently surrounds that phrase “together with us they adore the one, merciful God.” Many Catholics have been left with the impression that the God of the Koran is therefore the same God that Christians believe in. Is that correct? Or are Catholics entitled to a fuller, clearer explanation?

The inadequacy of paragraph 841 of the Catechism is compensated for to some extent by the surrounding paragraphs. Read in its full context, 841 can hardly be considered the ringing endorsement of Islam that some have made it out to be. As with other religions, there are elements of truth and goodness in Islam, but it is a long way from the fullness of the truth offered by the Church. And just to emphasize the point that there is no equivalence between Christianity and other religions, paragraph 848 reminds the reader that although God can guide those who are ignorant of the Gospel, “the Church still has the obligation and also the sacred right to evangelize all men.”

Today's common-ground-at-any-cost Catholics would profit from reading all of the relevant passages on non-Christians in the Catechism. They would also benefit from reading Lewis' prescient tale about the dangers of succumbing to a “Tashlan” mentality.

This article originally appeared in the February 26, 2016 edition of Crisis. It is published here with permission from the Turning Point Project.