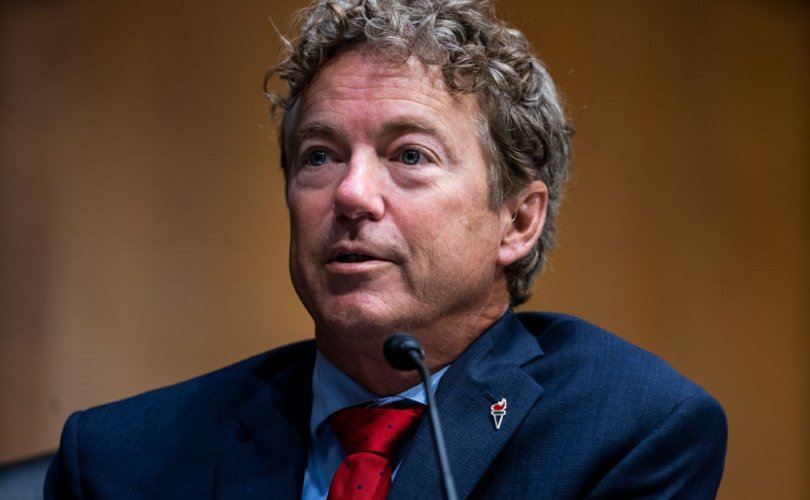 September 1, 2020 (American Thinker) — Following the conclusion of the Republican National Convention, the far left's “fiery but peaceful” protestors had a pretty disgusting plan: instead of just yelling at the top of their lungs from the outside, or attempting to disrupt the convention from the inside, or burning and looting nearby shops to give the whole thing a bad public relations odor, they decided to physically attack Republicans as they exited the convention. That was the plan.

They certainly attacked random nobodies exiting the front, but when Sen. Rand Paul attempted to get to his hotel two blocks away on foot after waiting 45 minutes at the wrong hotel, the mobs recognized him and got really excited, first swarming him and his wife in a group of 30, and then swelling to 60, and then to a 120-sized turba mob. They made lunging attacks at the senator and his luckily spotted police escort who were trying to protect Paul and his wife and deflect the “protesters.”

It was a travesty. Paul described it very well.

Some excerpts: “We cannot go outside now, it's too dangerous.”

“The United States is going to become Portland.”

“This is happening in all our cities, thank God for the police.”

“I want to live the life of a normal person, where I go to the grocery store and buy groceries, or stop at the Minute-Mart.”

“This also is not normal. There's something … going on here. This is like, the FBI needs to be involved.”

And more specifically, as the Fox News reporter probed:

My feeling is there is interstate criminal traffic being paid for across state lines, but you won't know it unless you arrest them. Otherwise you just think oh these are just some normal hoodlums from a big city. I promise you that at least some of these members and people who attacked us were not from D.C. They flew here on a plane, they've all got fresh new clothes, and they were paid to be here. It is a crime to do that and it needs to be traced. The FBI needs to investigate. But the only way you can do it is you have to arrest people. And usually we say 'oh, well, you didn't get hurt, so we're not going to arrest them.' They were inciting a riot, and they would have killed us had the police not been there. They all need to be arrested, and I'm not saying forever, but they need to be arrested, questioned, they need to say where you're staying, and the bills need to be subpoenaed by a judge, to say 'who paid for your bill, how did you get here on a plane and staying in a fancy hotel, and yet you're acting like a criminal.' Something's going on here and it's much bigger than people think. But the bottom line is, we can't let the United States become Portland and that's what my fear is…

This is pretty much the most important question that can be asked of any of this lunacy engulfing the country.

One, dangerously opaque foundations, such as the Tides Foundation, which takes cash in big amounts from anonymous donors and has been known to contribute to terroristic organizations such as Earth First! and the “Ruckus Society,” have stepped up their donations to “social justice” and “criminal justice” and “racial justice” organizations. George Soros's Open Society Foundation, while less opaque, given that the group's money comes from Soros's vast fortune as a currency speculator, is in this category, too. Here is what the New York Post, via the Center for Consumer Freedom, noted:

The New York Post reports today that the secretive Tides Foundation began organizing attacks on President Bush after receiving millions of dollars from foundations controlled by presidential candidate John Kerry's wife. Tides' role in this “charitable money-laundering” operation is hardly surprising. After all, for over two decades it has been a major financial clearinghouse for radical activist groups. Many major philanthropies like the Ford Foundation and Pew Charitable Trusts fund projects through Tides to disguise themselves as the funding source.

Anti-consumer beneficiaries of Tides' “anonymous” funds include Greenpeace, the Ruckus Society, the Center for Science in the Public Interest, the Natural Resources Defense Council (NRDC), and Earth First!. Earth First! spun-off the FBI-certified “terrorist” Earth Liberation Front in 1992. Tides was instrumental in NRDC's now-infamous (and unfounded) health scare about Alar on apples. NRDC paid the PR firm that was promoting the scare through the Tides Foundation.

Second, the Democrats, who also take money from the donors to these foundations that may be behind these riots, have been curiously silent in their failure to condemn the violence, even on people they know and work with from the Senate building. Joe Biden made a general condemnation of violence after poll numbers showed that rioter violence was not playing well with the American voters, but he hasn't said a thing about the attack on Sen. Rand Paul. His running mate, Kamala Harris, is even worse, witchily cackling that the violence will never stop, as noted in this well written blog item today by Bill Dunne here.

Paul noted the irony of his own role in attempting to get justice for Breonna Taylor, who was killed in a no-knock raid on apparently the wrong apartment, writing a bill to ban no-knock raids. But he came off as a little naïve there — these mobs aren't interested in reform. They want to tear the whole edifice down, and some huge billionaires are behind them. More than tanks in the streets, there needs to be an investigation into who's funding these mobs and arrests of the foundation executives and moneybag billionaires found to be involved. We still don't know precisely which ones are doing this, and it's critical that we find out, because as Harris says, the attacks won't stop (and we need to know how Harris would know this, too). Some big swoop-downs need to happen, and one hopes the Trump administration is willing to take on the task or is already on it. Paul would be wise to initiate some Senate investigation, too, because someone's getting away with this, and the attacks are growing more brazen, targeting not just shopkeepers, but now police and elected officials.