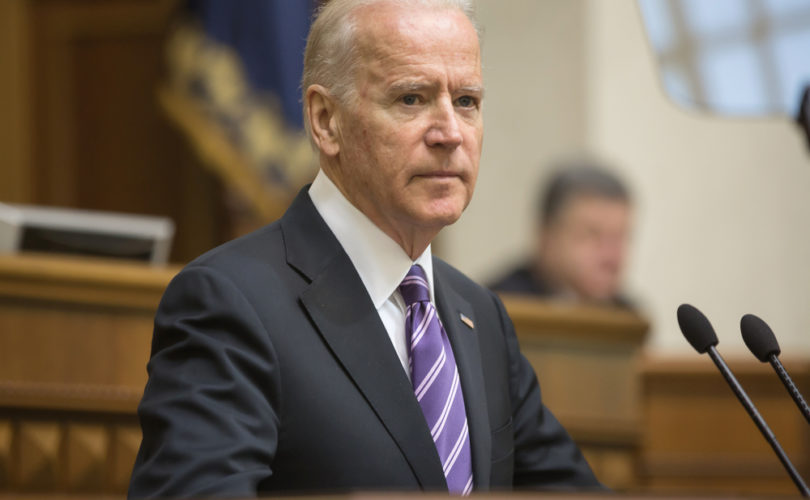 Cheer, cheer for old Notre Dame…
What though the odds be great or small
Old Notre Dame will win over all
While her loyal sons are marching
Onward to…moral equivalency and rampant degradation of Catholic teaching.

The famed “Notre Dame Fight Song” is supposed to end with the rousing phrase, “Onward to victory!” but I thought it more appropriate to alter the ending with a parody about what currently afflicts America’s greatest Catholic institution of higher learning. A once-great university has caved into the doctrine of politically-correct thinking and moral relativism – again.

Following on the heels of the scandalous invitation of President Obama to receive an honorary degree from the Notre Dame Law School in 2009, ND President, Fr. John Jenkins, invited Obama’s deputy, Vice President Joe Biden, to receive the University ’s highest honor, the Laetare Medal, at this year’s graduation on May 15th. Ostensibly, the nomination has to do with Biden’s years of public service as a Catholic; however, since Joe Biden has also spent most of his long career as an unrepentant advocate of degenerate and immoral causes, Fr. Jenkins had to justify and sanitize this travesty of political thinking. The perfect ruse for the great Biden absolution was to bestow the same award on the former Speaker of the House, John Boehner, who served in Congress for about the same length of time as Biden but with a somewhat less scandalous record of public service. As far as I know, Boehner has never advocated for any intrinsically evil policies or lifestyles like abortion or gay marriage.

The moral equivalency apologists argue that the two positions are basically the same: one guy was bad on moral issues, the other guy was bad on social issues, they say. It all has to do with the “prudential judgments” that politicians have to make in order to survive in public life. If someone is okay with Boehner’s record, they’d be hypocritical to say that Biden should be excluded – or so the argument goes.

But there’s something deeply twisted about this logic. Advocating for abortion and gay marriage (Biden) is not the same as opposing leftist versions of immigration reform (Boehner). Who can’t see that? If this is the state of Catholic thinking at the premier Catholic University in the land, we’re in trouble. To paraphrase Pope Benedict XVI, this is the dictatorship of moral equivalency writ large.

Fr. Jenkins has been able to slough off the anticipated fierce criticism from “partisan” groups (i.e., Catholics who that think there is something wrong with giving an award to an unrepentant abortion advocate) by donning the mantle of political peacemaker and urbane Good Shepherd who just wants everyone to get along: “We have to learn to disagree with each other in ways that allow us to work for the common good,” he said in a recent interview with Crux News. Fr. Jenkins believes that seating Joe Biden and John Boehner side-by- side on the stage at graduation and bestowing upon them the same award was a learning lesson for the graduating class of 2016.

But just exactly what are the students learning from this act of moral equivalency? That being nice to others is the core of the Gospel message? I would suspect that the class of Millennials graduating from Notre Dame this year were well-schooled in their post-Vatican II catechism classes in the Theology of Nice. That probably isn’t be their primary take-away. It’s also an absurd notion. Notre Dame Professor and Holy Cross priest, Fr. Bill Miscamble, noted with some irony, that Notre Dame is honoring a high-ranking member of the Obama administration for his “civility” in public discourse while the University is suing that same administration for the most uncivil act of violating the religious freedom of Catholics! He was referring, of course, to the Obamacare fiasco that has targeted and continues to target Catholic institutions and religious orders for not supporting the coercive contraception mandate. The evidence that Vice President Joe Biden was fighting to defend his beloved Catholic Church from such unprecedented aggression is, to say the least, entirely lacking.

Perhaps the primary lesson that Notre Dame graduates learned from Joe Biden and John Boehner taking the stage together is that the Catholic social and moral teachings mean exactly nothing to our society. When our Catholic institutions honor dissenters and our prelates stand silent in the face of this scandal, then it means nothing to be a Catholic in America, period.

The Biden honor is one of the worst affairs in the Church today because it is breeding complete apathy among both bishops and laity. Apathy, of course, is the major effect of moral relativism. Scandal is met with yawns; violation of sacred teachings is met with embarrassing silence. When President Obama received his award sixty bishops stood publicly against it. Seven years later only two have voiced their opposition. Where is the protest from the Catholic hierarchy? To their credit, the local bishop, Most Rev. Kevin Rhoades, and His Eminence, Raymond Cardinal Burke, have spoken out in protest of this degradation of Catholic life and practice. Yet, there are three hundred bishops in America, and only two have protested?

When faced with a similar scandal in the local church, St. Paul asked the Corinthians this question: “What has Christ to do with Belial” (2 Cor 6:15)? In other words, how can we compare or tolerate the mixture of sacred teachings with pagan practices? More to our case, there is absolutely no moral equivalency between the teachings of the Catholic Church and the voting record of Joseph Biden.

Fortunately for those of us who are looking for a silver lining in this storm of scandal, there is a Latin inscription around the rim of the Laetare Medal which exclaims boldly: “Magna est veritas et prevalebit” (“Truth is mighty, and it shall prevail”).

Yes, it will. Indeed it will.