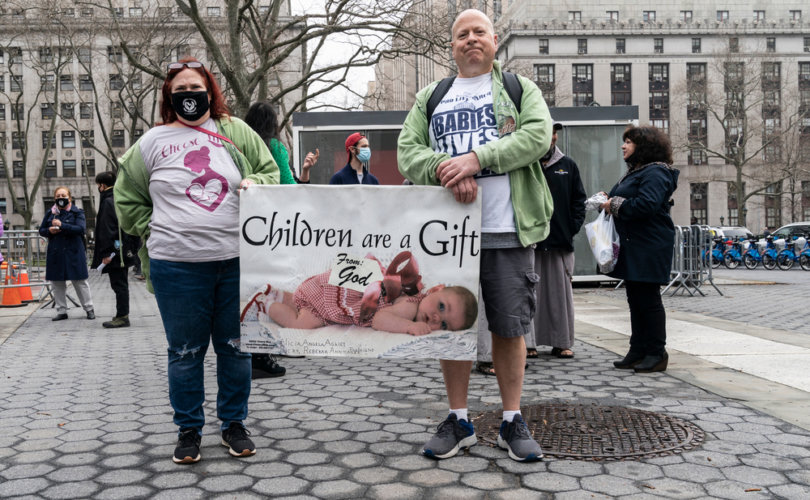 (LifeSiteNews) –  Roe v. Wade is dead, and the next phase of the debate begins. From the moral perspective, the Dobbs decision decided nothing. However, from a constitutional perspective, it did determine three crucial things. First, abortion is not found in any nook, cranny or penumbra of the American Constitution. Secondly, the drafters of the Constitution did not have the original intent to enshrine abortion into the law of the land. Finally, there is no constitutional right to procured abortion.

The Supreme Court ruling also had immense symbolic importance. While it did not ban abortion, it did encourage pro-lifers everywhere who have awaited this day. It devastated the morale of pro-abortionists worldwide. From a tactical perspective, the decision shows how the work of dedicated activists can overturn rulings deemed “settled.”  Against all odds, they triumphed. If it happened once, it could happen again.

However, nothing was decided about whether procured abortion is right or wrong. The Court returned the decision to the states or the federal legislature. An abortion in Mississippi is just as wrong as one in California. Its morality is not a geographic determination.

The limitations of individual opinions

Judging whether something is right or wrong is not a matter of opinion or whim. If it were only a matter of what one thinks, then all opinions would have equal weight. Moreover, opinions change with time. Unless bolstered by something greater, opinions cannot determine moral standards since they have no force beyond that of the individual.

Thus, when a rabid pro-abortion man, for example, declares the Dobbs decision to be wrong or illegitimate, he is making a judgment based upon some standard beyond his misguided opinion. He assumes it has some universal standing that overrides the considerations of a woman, for example, who declares abortion to be the immoral taking of innocent life. She also assumes some criteria by which she can make this correct determination that transcends herself.

Thus, the next big debate about abortion must be about the moral standard by which Americans must judge procured abortion.

Recourse to a higher law

The advantage of the Dobbs ruling is that it resolved the constitutional dilemma by determining that abortion is not to be found in the law of the land. However, the Court refused to consider abortion’s moral aspects. Neither side accepts compromise. The moral implications of procured abortion can only be decided by a higher law.

Like it or not, everyone follows a higher law in the sense of a set of rules above one’s own opinion. Order in society is impossible without some framework that allows people to cooperate and make moral decisions that favor the common good.

Two higher laws must be considered. Neither law is formally the law of the land. However, the two laws serve as sets of criteria upon which most Americans vaguely base their opinions.

The core of the coming debate is which of these two higher laws will prevail. It is a decision that will determine more than just the abortion issue but the direction America will take in the future.

The first is the law of the autonomous individual striving for an absolute license. It dominates society today.

Based on Enlightenment thought, this law declares that the highest law is the individual’s self-interest, freedom and gratification. It is the source of all morality.

As long as individuals do not impede the self-interest of another, each individual is free to engage in the pursuit of infinite possibilities, completely free to construct an eternally new self. Thus, the individual is the ultimate judge of what is right and wrong.

Ironically, this higher law was well described in the abortion debate in the U.S. Supreme Court decision, Planned Parenthood of Southeastern Pennsylvania v. Casey. Justice Kennedy declared: “At the heart of liberty is the right to define one’s own concept of existence, of meaning, of the universe, and of the mystery of human life.”

The problem with this higher law is that it accepts no boundaries or limits. As society decays, individual passions explode, and respect for the self-interest of others is lost. Soon any obstacle to self-gratification must be eliminated, even if it is an unborn child. Anyone who rejects a pronoun designation or self-identification must be persecuted by the State as violating this higher law.

The rule of this higher law can quickly become a tyrant of disordered passions that override all other considerations. It ultimately leads to self-destruction, irrational behaviors and nihilism.

The law that you can’t not know

The second higher law is found in what is known as the natural moral law. It consists of an objective moral framework based on the nature of things that makes social order possible. It is the same for all peoples, places, and times, although it may be expressed in different ways. Natural law exists today in the feeble remnants of its influence found in Western law.

Natural law acknowledges God as the author of all law reflected in His eternal law, which Saint Thomas Aquinas affirms is the rational plan by which God’s Wisdom orders all creation. Thus, law gains that authority not found in law based upon mere opinions.

Saint Paul claims this law is written upon all hearts (see Rom. 2:15). It can be perceived in society by the unaided reason and is summarized well in the Ten Commandments. Thomist author J. Budziszewski claims it is a set of rules governing fallen human nature that “you can’t not know.”

It is by this law that lies, thievery and murder, for example, are universally recognized as wrong. The purpose of speech is to reveal the truth. Thus, the lie is a violation of the nature of speech. Applying this law results in order and peace in society.

Law Is whatever you choose

In the 19th century, liberal society abandoned the notion of natural law and broke the legal links with the Creator. Modernity adopted a positivistic notion of law that declared man as its source. Thus, law is merely the result of social agreements and conventions. It codifies actions, customs and procedures developed in society. This mechanistic treatment of law makes man the source of law. Practically speaking, law becomes whatever judges say it is.

Thus, modern positive law claims to be morally neutral. However, if the nation’s judges and citizens favor immoral behavior, as in procured abortion, the law will tend to reflect the prevailing ethos. As society decays, so also does law. It is never neutral but becomes an instrument for imposing the law of the autonomous, license-seeking individual upon society.

American society is thus left with a legal system that refuses to define itself morally. The breakdown of society demands that moral decisions be made with urgency.

The next phase of the abortion fight must address the higher law battle. It will occur above all in the culture before being reflected in the legal realm. It must consist of rejecting the disastrous effects of the sexual revolution. It calls for repudiating the autonomous, license-seeking individual vision of society, devastating the culture and destroying the law.

The Dobbs decision proved that Americans desire moral certainty and are willing to fight for it. They see the calamitous results of individual, license-seeking autonomy in the death of countless unborn babies. Everyone follows a higher law. The choice post-Roe America must ask is: Which higher law will the nation choose? Embracing God’s natural moral law is the only way to return to order.