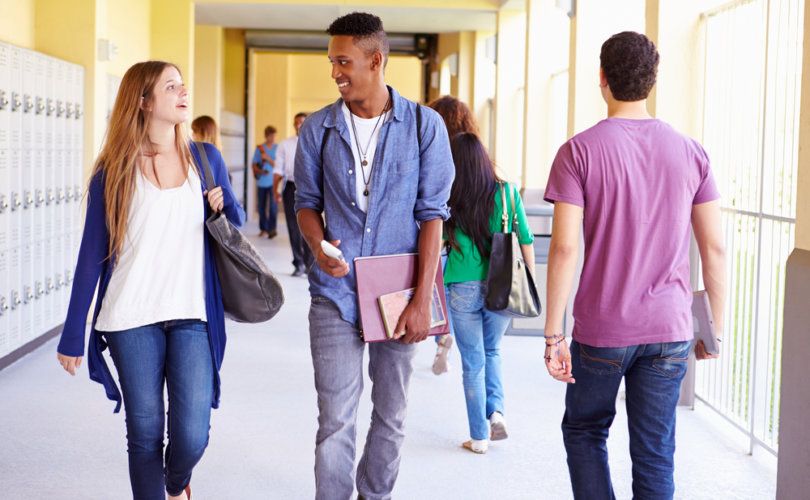 June 29, 2016 (DailySignal) — “Teenagers have sex. Deal with it.” That was a dismissive statement by a blogger in 2012 who taught at Yale University’s School of Public Health.

Fortunately, teens did deal with it—by not having sex. They seemed to have missed this flippant blog and ignored this careless advice from adults who should know better.

On June 9, the Centers for Disease Control and Prevention released the new 2015 data from the most recent Youth Risk Behavior Survey, which updates what we know about youth and their engagement in health risk behaviors.

The results show that fewer teens are drinking than before, less are involved in physical fighting, and teen smoking hit its lowest level since the government began tracking it in 1991.

In real numbers, that means that nearly 6 in 10 teens are making the healthiest choice by waiting for sex—the highest percent to date.

But the big news is the dramatic increase in the percentage of teens who have never had sex. Since 1991 (the first year the CDC began tracking youth risk behaviors), the percent of high school students who have never had sex has increased 28 percent. In real numbers, that means that nearly 6 in 10 teens are making the healthiest choice by waiting for sex—the highest percent to date.

When the CDC released the news a few months ago that teen birth rates are now at an all-time low, few suggested that waiting for sex might be a significant reason. Instead, many proposed the decline was due to teens using more contraception, or teens’ concern with the economy, and even the effects of the MTV reality show, “16 and Pregnant.”

They weren’t getting pregnant, but many thought it almost inconceivable that teen birth rates might be dropping because teens weren’t having sex.

Now that we know that the percent of high school students who have never had sex has increased by more than 10 percent in only 2 years, we at Ascend anticipate a public acknowledgement of the relevancy and efficacy of the Sexual Risk Avoidance message in both press and policy.

Sexual Risk Avoidance is a sex education approach based on a recognized and often used public health model known as “risk avoidance” or “primary prevention.” It is the standard approach used to address risk behaviors such as underage drinking and smoking and is entirely appropriate and beneficial in addressing the risk of teen sex.

These programs focus on the whole person by sharing the importance of healthy decision-making to future life outcomes. They teach the skills of the success sequence—which dramatically reduces the chance that youth will live in poverty as adults—if they implement the following in order: finish school, get a job, and then have children after marriage.

In addition, these programs discuss the components of healthy relationships, future family formation, and the impact that waiting for sex can have on academic success. Science shows those teens that choose to wait to have sex until marriage increase their chances for a happier marriage, healthier future family, a life of self-discipline and productive citizenship.

Since being evidence-based is a high commodity in the Teen Pregnancy Prevention arena, there should be a rush to accept and affirm the role that education has played to bring about this positive trend.

But astonishingly, some are proposing that teens don’t have time for sex. Why? Because they are so busy interacting on social media. However, this explanation doesn’t wash because the decline began before social media was popular.

There is more to the story. The 28 percent increase in students who have never had sex is unprecedented and has been two decades in the making. This fact should calm the concerns of those who have suggested this good news could be merely a statistical blip.

We are seeing an encouraging trend that has been sustained for more than two decades. More teens in every high school grade are waiting for sex in greater numbers than ever before. Overall, almost 60 percent of all teens have not had sex. The majority of high schoolers are waiting until their senior year to experiment sexually—a time when most schools don’t have any education to reinforce the healthiest choice to wait. Even so, many more high school seniors are waiting than they were two decades ago.

The data is clear. It confirms that Sexual Risk Avoidance is realistic and that it resonates with teens. It also tells us that we need to be more intentional with the messages we send to teens—and the importance of giving teens the skills to graduate high school without any of the negative consequences that can surround teen sex. Today, those messages normalize sex, especially for older students. This must change.

I encourage Congress and local communities to use this new data to give more emphasis on the Sexual Risk Avoidance approach to sex education. Teens themselves are proving waiting is doable.

The recent CDC data makes a strong case for Sexual Risk Avoidance education. Policymakers must respond in-kind, rather than capitulating to the troubling sound bite like, “Teens have sex. Deal with it.” Fewer teens are having sex, so we can deal with that by reinforcing their good choices.