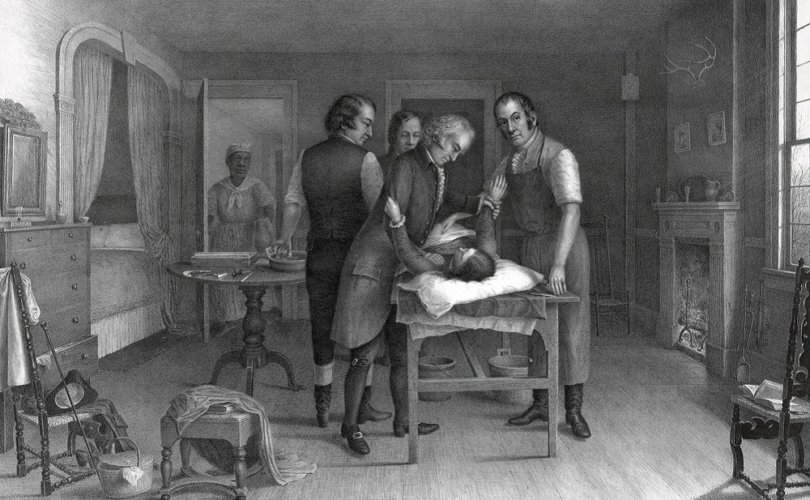 June 28, 2019 (LifeSiteNews) — On June 23, 2019, the N.Y. Times published a guest editorial by John Irving, the Oscar winning screenwriter of the Cider House Rules, in which he proclaimed that “abortion opponents don’t care what happens to an unwanted child, and they’ve never cared about the mother.”

During the month when America is being carpet-bombed with propaganda pushing inclusion and tolerance, Mr. Irving proves what social conservatives have known from the beginning: the tolerance of the godless Left is very often a one-way street. “All are welcome,” proclaim the rainbow-colored banners, unless, of course, you happen to believe that children in the womb deserve fundamental human rights.

Mr. Irving’s essay is dripping with the condescension of a person who believes he is superior to those with whom he disagrees. It is reminiscent of Obama’s famous quote describing those who challenged his policy views as bitter people who “cling to guns or religion or antipathy to people who aren’t like them or anti-immigrant sentiment or anti-trade sentiment as a way to explain their frustrations.” His essay also expresses similar sentiments to Hillary Clinton’s famous description of Donald Trump’s supporters as a “basket of deplorables.” So much for inclusion and tolerance.

One has to wonder whether Mr. Irving’s pro-abortion tirade isn’t just his way of “explaining his frustrations,” or perhaps, instead, a result of his guilty conscience from something in his own past. Of course, no one is immune from making bad choices, but it is how one reacts to those bad choices that demonstrates his maturity as a person.

I was once oblivious to the plight of the child in the womb. As a teenager caught up in what I thought was an unplanned pregnancy, I once said the words, “I’ll support you in whatever choice you decide to make.”

I thought I was being a real man, when, in fact, I was putting all of the responsibility of a reckless lifestyle on my girlfriend. Thankfully, I didn’t become the father of a dead child. But I could have, and maybe if I had, the weight of that choice on my conscience would have left me bitter and resentful toward those who proclaim the painful truth that abortion is murder.

I don’t wish to make the same mistake as Mr. Irving by condemning and demonizing him as a hopeless proponent of child murder. Instead, I would like him to know that no one is beyond redemption and that the greatest sinners have often become the greatest saints.

I would, however, like to set the historical record straight, because while personal experience and emotions matter to all of us as human beings, facts exist apart from ideology, and truth and history are objective things that exist apart from our feelings.

Setting the record straight: A matter of policy preference

Mr. Irving asserts that pro-lifers don’t care about unwanted children and rhetorically asks: “Aren’t the same people who sacralize the fetus generally opposed to any meaningful welfare for unwanted children and unmarried mothers?” The answer is no, of course. Generally, people who recognize the pre-born child as a person are the same ones who lead adoption agencies for children and crisis pregnancy centers for unwed mothers. They fund private school grants for low-income children and immigrants, and they advocate policies across the board that provide meaningful ways to improve the welfare of children.

When Mr. Irving refers to “meaningful welfare,” he means government-funded, socialized welfare and health care. Unfortunately, Mr. Irving making the same error as Obama and Clinton, which is to demonize those who disagree on a particular policy preference.

I genuinely believe, and I am happy to back up my belief with solid evidence, that free-market capitalism built upon a solid moral foundation provides the greatest meaningful welfare for the greatest number of people, especially for those who would benefit the most from merit-based upward mobility. However, I also know that the majority of those who believe in socialized government welfare have a genuine concern for the welfare of the vulnerable and disadvantaged. My policy preference does not prejudice me against those people. Instead, I hope that, from a position of respect for the other person’s motives, I can convince him of the strength of my beliefs.

Unfortunately, respectful disagreements are rare, especially when it comes to abortion. The fact that the N.Y. Times published such a vitriolic, prejudiced (and, frankly, bigoted) opinion-editorial is evidence of how far we have fallen as a society.

Setting the record straight: The history

The second objective point that needs correction in Mr. Irving’s essay concerns the historical evolution of abortion laws in America. Mr. Irving states that the reason behind the advancement of America’s 19th-century anti-abortion laws is, at best, unknown:

Doctors were establishing their new profession; midwives and homeopaths were their competition. But why did doctors lobby for abortion to be illegal? What was their logic? Did doctors underestimate how great the need for abortion was? We know what the doctors wanted, and they achieved it; they became the arbiters of women’s reproductive health care. We don’t know the doctors’ reasons for making abortion illegal. In the 1840s, the fetus wasn’t yet sacred. Fetal life was still defined by “quickening” — when the woman felt the fetus move, not before the fourth or fifth month. From the 1840s to 1900, we know the results of what the doctors did — not their thoughts.

In fact, we know precisely what doctors were thinking and why they, and not priests and pastors, were the ones who led the crusade to criminalize abortion in America. Mr. Irving, and anyone interested in this history, should read Frederick Dyer’s excellent book, The Physician’s Crusade Against Abortion, which details the life and work of Dr. Horatio Storer, the Harvard-trained physician who led the American Medical Association’s opposition to abortion.

Dr. Storer was not just a 19th-century pro-life doctor. He was one of the fathers of the modern practice of gynecology. He developed and performed some of the most revolutionary procedures of the time and published extensively on the topic of prenatal and maternal health in the most prestigious contemporary scientific journals. His “reason for making abortion illegal” is crystal-clear for anyone wishing to do a minimal amount of research. Dr. Storer, who was not Catholic, was guided not by papal encyclicals (which Mr. Irving quotes extensively with an obvious anti-Catholic bigotry), but by the perfectly reasonable medical ethic of protecting and healing human beings. To Dr. Storer, the American Medical Association, and a majority of physicians at the time, it was clear that a pregnant mother presented them a case with two patients, and that both deserved care, and that neither should ever be killed intentionally.

As his own published scientific studies and those of other medical pioneers of the time showed, the child in the womb was recognized as being alive from the moment of conception. Again, this was not a religious belief, but a scientific reality. In the mid-1800s, medical science was advancing at a pace that would be matched only by the advent of modern genetics. As a result of these advances, Dr. Storer and his fellow physicians at the American Medical Association concluded that the old medical standard of “quickening,” which marked the beginning of life from the moment when the mother could feel the child move, was unscientific and obsolete. In fact, it was also dangerous for both mother and child, as the lack of criminal penalties and regulation left open the door for unscrupulous quack doctors and midwives who profited in a manner not unlike Dr. Kermit Gosnell.

Thanks to Dr. Storer’s successful advocacy, the child in the womb would be protected by law until the sexual revolution created the demand to legalize abortion as a way to sanction sex without consequences. This move to decriminalize abortion would see its climax in the unconstitutional decision of Roe v. Wade, which ignored basic human biology and legal precedent and dehumanized the child in the womb.

America has had to grapple with the dehumanization of an entire class of human beings before. The clearest example was the institution of American slavery, which claimed the lives of countless slaves and hundreds of thousands of soldiers in the Civil War.

Interestingly, during the same time that Dr. Storer was advocating for the protection of prenatal children in the various states’ criminal codes, the United States was responding to racial bigotry with the promise of equal protection in the 14th Amendment. It is an accepted historical fact that while many of the slavery abolitionists were Northern Christians, their motivation to oppose the institution of slavery was not a desire to impose their theology on the South. Likewise, while it is true that physicians like Dr. Storer were Christians who felt a moral obligation to combat the grave injustice of abortion, their motivation was not to impose a theological belief upon others, but rather, like the slavery abolitionists, to combat injustice.

Mr. Irving’s thesis that the timeline of abortion opposition can be boiled down to a “long cruel history” of misogynistic religious zealotry is a figment of his own anti-Christian imagination. In fact, it is fair to say that if the criminal abortion laws that were passed as a result of Dr. Storer’s campaigns are to be considered a violation of the 1st Amendment, then the 14th Amendment would also have to be considered unconstitutional for the same reasons.

In 2012, I wrote and produced a short film titled Emancipation that explores the interplay between slavery and abortion. You can watch it here. It is set in a Western town in the 1850s, before Colorado became a state and when tensions over slavery were at their peak. In my film, the life of a runaway slave crosses paths with the life of a prostitute when they fall in love and conceive a child.  As was commonly the case with prostitutes in the West, the female protagonist had been lured and trafficked into the life of a saloon prostitute and was kept there as a sex slave. The antagonist is the local saloon owner, who is also the town veterinarian and quack abortionist. I don’t wish to spoil the film, so suffice it to say that in Emancipation, the protagonists are set free from bondage through a life-affirming twist that resembles the true stories of countless women who overcome difficult circumstances surrounding their pregnancies to become heroic mothers.

Like the film Cider House Rules, which earned Mr. Irving his Oscar, his glorification of renegade abortionists is pure fiction. The reality is that even Mr. Irving’s hero, Planned Parenthood founder Margaret Sanger, initially advocated for contraception as a way to avoid the crime of abortion precisely because she recognized that a child was being killed and a pregnant mother’s life was being endangered.

The clear anti-religious animus displayed by Mr. Irving’s editorial is a sign of the times. It has led him to an erroneous historical conclusion and an equally erroneous characterization of pro-lifers as misogynistic “zealots.” I am convinced that in time, his essay will be read as an example of the gravest moral failing of our era.

Gualberto Garcia Jones, Esq. is the president of the Personhood Alliance and a licensed attorney in the commonwealth of Virginia. He is a human rights adviser to the Holy See Mission to the Organization of American States and works in Washington, D.C. to stop the expansion of abortion in Latin America.