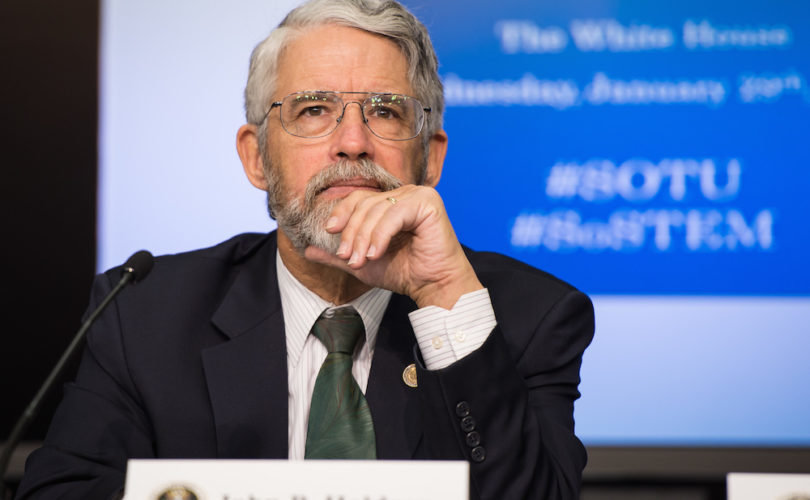 It's not every day that a politician boasts that he receives his expert scientific advice from a population control fanatic who has justified compulsory abortion for American women – but then, as he likes to remind us, Obama is not like other presidents.

In a June 25 speech to the League of Conservation Voters, held in the Reagan Building, Obama mocked and ridiculed his political opponents. Again (yawn). This time, he targeted Republicans who say they do not believe in global warming.

“They say, 'Hey, I’m not a scientist,' which really translates into, 'I accept that man-made climate change is real, but if I say so out loud, I will be run out of town by a bunch of fringe elements that thinks climate science is a liberal plot, so I’m going to just pretend like I don’t know, I can’t read,'” Obama said.

“I mean, I’m not a scientist either, but I’ve got this guy, John Holdren – he’s a scientist,” Obama intoned.

I have a special interest in Science Czar John Holdren. I was the first journalist to expose his support for compulsory abortion for American women in February 2009. Having learned President Obama appointed him as Science Czar, I went to a research library that had several of Holdren's writings, including the book Ecoscience, which he co-authored with population control extremists (and frequent co-authors) Paul and Anne Ehrlich. My article reviewed numerous areas of Holdren's radicalism – none more striking than his belief that a world government should determine the proper population of each region and enforce that level, by any means necessary.

He offered that “a comprehensive Planetary Regime could control the development, administration, conservation, and distribution of all natural resources. … The Planetary Regime might be given responsibility for determining the optimum population for the world and for each region and for arbitrating various countries’ shares within their regional limits. …. The Regime would have some power to enforce the agreed limits.”

Holdren, et. al., believe this global body possesses “ample authority under which population growth could be regulated.” Hiding behind the passive voice, they wrote, “it has been concluded” – by whom? – “that compulsory population-control laws, even including laws requiring compulsory abortion, could be sustained under the existing constitution if the population crisis became sufficiently severe to endanger the society.” (Emphasis added.) They added that if parents were guilty of “overproducing children, and if the need is compelling, they can be required by law to exercise reproductive responsibility.”

To further reduce the West's population and carbon footprint, the “de-development of overdeveloped countries … should be given top priority.”

All of this flows out of a comprehensive, if repugnant, philosophy. “The neo-Malthusian view proposes … population limitation and redistribution of wealth,” Holdren and the Ehrlichs wrote in Ecoscience. “On these points, we find ourselves firmly in the neo-Malthusian camp.”

After my exposé, Holdren's office responded that his words were being twisted – without actually disavowing the use of compulsory abortion. He said through spokesman Rick Weiss that “the authors’ own preference was to employ the noncoercive approaches before the environmental and social impacts of overpopulation led desperate societies to employ coercive ones.” (Emphasis added.) That hardly differs from Paul Ehrlich's view in his 1968 book The Population Bomb, that “[w]e must have population control at home, hopefully through a system of incentives and penalties, but by compulsion if voluntary methods fail.” Twenty years later, Ehrlich called China's one-child policy “vigorous and effective.” Not exactly encouraging.

At his confirmation hearings, Holdren said, “I no longer think it's productive, Senator, to focus on the optimum population for the United States.”

All of Ecoscience's authors went on to make startlingly inaccurate predictions. But Holdren failed upward, leaving a post at Berkeley to become the Teresa and John Heinz Professor of Environmental Policy at Harvard's Kennedy School of Government, then Obama's science adviser.

His batting average hasn't improved in recent years. During his Senate confirmation hearings, Holdren affirmed that “carbon dioxide-induced famines could kill as many as a billion people before the year 2020.” Yes, Obama is bragging about receiving advice from a man who believes that global warming could kill the equivalent of everyone in India within the next six years.

There's no harm in being wrong – even irresponsibly, perpetually wrong – unless you combine that with fanaticism, power, and influence, as John P. Holdren does.

“Holdren has this president’s ear, perhaps more than any White House science adviser in recent memory,” Henry Fountain of the New York Times reports, saying the alarmist plays a “pivotal role in the administration.”

According to White House Chief of Staff Denis R. McDonough, Obama writes notes on memos he receives about scientific issues saying, “I need to know what Holdren thinks on this.”

Fountain writes that “Holdren’s influence can be seen in many of the administration’s policies,” such as its tax on carbon emission – the mechanism Holdren proposed to siphon those trillions of dollars out of Americans' pockets as recently as 2007.

His malign influence can also be seen in the Obama administration's incessant propaganda for abortifacient “long-acting reversible contraceptives” (LARCs), such as the IUD and Norplant. In April, the CDC suggested that Medicaid pay for teenagers to obtain abortion-inducing contraception without parental notice and lamented the “missed opportunity” to teach girls about LARCs before the age of 15 in the public schools.

The CDC's 2012 Abortion Surveillance advised “[r]emoving cost as one barrier to the use of the most effective contraceptive methods” – that is, IUDs and LARCs – calling it “an important way to reduce the number of unintended pregnancies.” However, IUDs do not reduce pregnancies so much as abort them.

Obama concluded his latest round of mockery by saying, “I'm not a doctor, either, but if a bunch of doctors tell me tobacco can cause lung cancer, then I'll say, 'OK,' right? … I mean, it's not that hard.”

OK, Mr. President, will you accept what scientists say about when life begins? Their consensus would be a dramatic improvement over the counsel of Mr. Holdren.