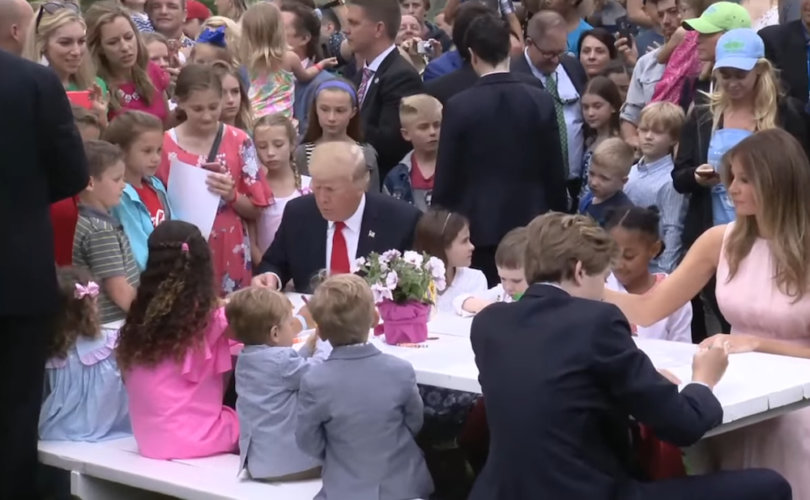 President Trump and his family let the children come to them at the White House's annual Easter Egg Roll.whitehouse.gov

April 18, 2017 (LifeSiteNews) — Most people think of the annual White House Easter Egg Roll as a special event for children, but under the Obama presidency, it took on a dual political purpose as another excuse to promote sexually aberrant “LGBT” lifestyles and “gay parenting.”

That didn’t happen this year at the first official Easter Egg Roll held under President Trump, and some LGBTQ activists are hoping that’s only because Trump is just getting started. The Egg Roll was held Monday on the White House lawn and drew an estimated 18,000 people.

Liberal news sources and websites that spend a lot of time condemning Trump found more to criticize in his team’s handling of its first official Easter Egg Roll.

Prior to the event, The New York Times ran an article about how behind the Trump team allegedly was in pulling it together.

And after it, the vulgar Right-bashing site Wonkette used its “coverage” of the Easter Egg Roll to trash the president and First Lady. Somehow, Wonkette senior editor Evan Hurst, a homosexual activist, found a way to work the F-word into his description of a fun-loving, annual tradition for children. Apparently, that’s par for the course for Hurst.

The Washington Blade, a D.C. newspaper for homosexuals, reported April 12 that “Because of the event’s emphasis on family, the [White House] Easter Egg Roll in years past has served as a vehicle to promote LGBT families and their children at times when relationship recognition was threatened by efforts to ban same-sex marriage or progressing as litigation seeking marriage equality proceeded through the courts.”

Among the invitees last year at Obama's final Easter Egg Roll “was seven-year-old Jordan G. of Independence, Ky., and his family, who were invited to the event after Jordan wrote a letter to President Obama in which he said he found his 'forever family' — two dads named Jeremy and Matt,” the Blade reported.

Little Jordan — intentionally denied a mommy by his adoptive, homosexual “dads” — had written to President Obama, “I have two dads named Jeremy and Matt that are keeping me forever … I know you can’t come to my adoption, but I wanted to tell you thank you for everything that you are doing to keep me safe.”

As the Blade reminds us, under Obama homosexual and transgender activists inside and outside the White House — and there was an historic number of activists inside — worked together to “mainstream” homosexuality and gender confusion using whatever vehicle they could.

That included, sadly, pro-homosexual protests and advocacy at the Easter Egg Roll. Because, as homosexuals-in-the-military activist Ashley Broadway-Mack told the Blade, “The Easter Egg Roll is about kids, not political agendas.” Right.

Even though Obama is easily the most pro-LGBT president in history, even he was targeted for pro-“gay” protests. In 2012, homosexual activist Jarrod Scarbrough used the Easter Egg Roll to coordinate a protest to “demand Obama sign an executive order barring anti-LGBT workplace discrimination among federal contractors. Obama signed the order in 2014,” the Blade reported.

Another homosexual activist, Stan Sloan, CEO of the Family Equality Council, which represents what it claims are “the three million parents who are lesbian, gay, bisexual, transgender and queer in this country and their six million children,” told the homosexual newspaper that he “has received no communication from the White House this year on including LGBT families in the event.”

Said the oh-so-serious Sloan: “We have no indication that this is intended as a deliberate move to exclude members of the LGBTQ community — rather we feel this simply reflects recent media reports of an understaffed White House.”

The Blade acknowledges no specific intent under Trump to “discriminate” against homosexual-led families: “This time around, the White House says any groups interested in attending the Easter Egg Roll — LGBT or otherwise — are able to take part if they only reach out to the administration.”

Hopefully, in the years ahead, the LGBTQ adults will just let the kids be kids, and keep their disordered politics off the White House lawn.