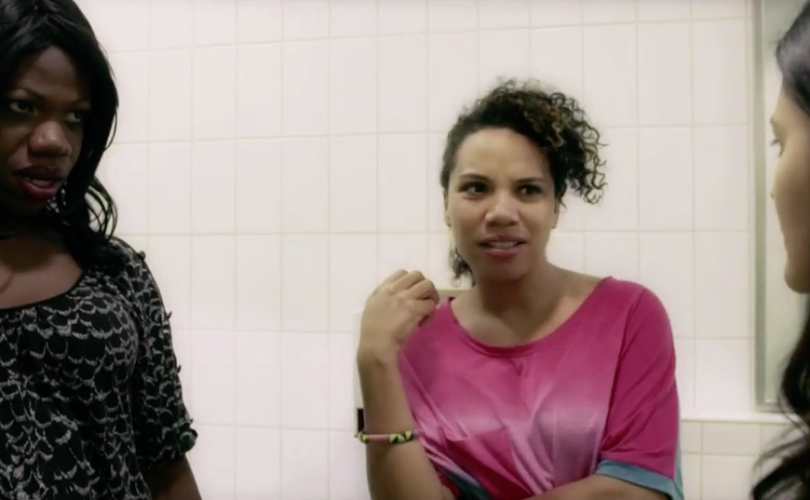 March 3, 2017 (Every Day for Life Canada) — Why is the Ontario English Catholic Teachers Association, OECTA, helping to push transgenderism in separate schools? It's not Catholic. But that's exactly what they are doing. In a partnership with Egale Canada, teachers will be able to use a new resource called, Draw the Line – Against Transphobic Violence (DTL – ATV).

The February 2017 issue of the OETCA newsletter contains an article by Alyx Duffy called, “Supporting Gender Diversity in the Classroom.” It's all about telling teachers how they can use the new resource to develop lesson plans for Grades 9-11 to teach transgenderism and “gender diversity.” It's also to get students and teachers to accept and promote “gender diversity.” But of course students and teachers won't be told that directly.

Guess who Duffy is? He's the Youth Program Coordinator for Egale Canada. This is an activist organization that makes it its mission to advance sexual orientation and “gender identity.” The group claims to be promoting “sexual rights.” But merely because they make the claim about these “human rights” doesn't mean they exist. In fact, the Universal Declaration of Human Rights makes no mention of either “sexual or reproductive rights.” The word right is misused in an attempt to persuade others and to prevent objections. OECTA should not be working with this group. The Catholic schools develped their document called, Respecting Difference, a teacher resource to address the LGBTQ issue. We can only assume that OECTA no longer feels it has to follow what the Ontario Catholic Schools Trustees Association approves and develops.

Let's briefly examine sections of the resource. Draw the Line – Against Transphobic Violence (DTL – ATV) defines under the heading of “Trans 101” sex, intersex, gender identity and cisgender this way:

SEX/ASSIGNED SEX Sex / assigned sex is the classification of a person as male, female or intersex based on biological characteristics, including chromosomes, hormones, external genitalia and reproductive organs. The reason we say assigned sex versus biological sex is to acknowledge that sex is often a value determined by medical professionals and is commonly assigned to newborns based on visual assessment of external genitalia. Inclusion here of the recognized category of “intersex,” frequently overlooked in discussions of sex, serves as a reminder that even at the level of biology, sex is not a binary system.

Intersex (adj): Refers to a person whose chromosomal, hormonal or anatomical sex characteristics fall outside the conventional classifications of male or female. The designation of “intersex” can be experienced as stigmatizing given the history of medicalpractitioners imposing it as a diagnosis requiring correction, often through non-consensual surgical or pharmaceutical intervention on infants, children and young adults (some people may not be identified as “intersex” until puberty or even later in life).

GENDER IDENTITY Gender Identity is a person’s internal and individual experience of gender. This could include an internal sense of being a man, woman, both, neither or another gender entirely. A person’s gender identity may or may not correspond with social expectations associated with the sex they were assigned at birth. Since gender identity is internal, it is not necessarily visible to others. It is important to remember that gender identity is not the same as sex/assigned sex.

CISGENDER IDENTITIES At first reading, it is often difficult for many people to distinguish the difference between sex / assigned sex and gender identity. This is quite common due to the fact that the two are frequently portrayed as essentially the same thing. One reason for this is that many individuals experience the sex they were assigned by medical professional at birth as very similar to their conception of their own gender identity. The term cisgender describes this particular relationship:

Cisgender: A person whose gender identity corresponds with the social expectations associated with the sex assigned to them at birth. E.g., imagine a newborn baby. The midwife who just delivered this child takes a look at the external genitalia, recognizes a vulva, and declares “she’s a girl,” thus assigning the child’s sex as ‘female.’ Based on this information, it’s generally assumed that this child would then grow up to identify themselves as a girl or woman. If that was the case, they could be described bythe term cisgender.

Cisgender, or cis for short, is a particularly important term in that it describes an extremely common, and in fact socially dominant, experience of gender identity in relation to assigned sex at birth. Without access to the word cisgender, people have often resorted to language like ‘real/normal men and women.’ Referring to cisgender individuals as ‘real’ or ‘normal’ when compared to trans individuals is particularly violent language in that it implies that trans men and woman are not in fact real or normal. This is inaccurate and it excludes and alienates trans individuals from community, and propagates transphobic attitudes. Cisgender is the appropriate term whenever describing individuals whose gender identity aligns with the social expectations of them based on their sex assigned at birth.

Here is how “trans” is defined:

Trans: A person who does not identify either fully or in part with the gender associated with the sex assigned to them at birth—often used as an umbrella term to represent a wide range of gender identities and expressions.

E.g., again we can imagine a newborn baby. The doctor delivering this baby takes a look at external genitalia, notes a penis, and declares “he’s a boy,” assigning the child’s sex as ‘male.’ Based on this information, it’s generally assumed that this child would then grow up to identify as a boy/man. In this example, we can imagine that this child may instead grow up with the gender identity of a girl, or woman. In this case they may then also identify themselves as trans.

All this confusing content about human sexuality has nothing to do with Catholic teaching. We should not be teaching in Catholic schools (public schools too) what is based on deception and bad science. First, where is the evidence that we find in the resource title about “transphobic violence”? None is offered because it isn't a serious problem in schools. It's a manufactured problem. The word violence is used to create a sense of victimhood in order to divide and persuade. Second, sex is not assigned by a midwife or a doctor. It's based on a biological reality and what God created. We cannot deny our sex no more than we can change our age, our weight or blood type. The resource uses the word “trans” in order to argue that because the term exists so too must individuals who are neither male or female but a combination of both and more or less. This is made up language. And where is the pedagogical need to teach all students that a boy can be a girl and a girl can be a boy, unless we want to confuse them?

It's very sad that so much time and money are put to develop anti-Christian and anti-human resources that will end up harming children's health, mind and souls. Teachers are paying OECTA $1,100 a year in union dues and some of that money is being wasted on implementing and supporting this misguided resource. Parents need to realize that OECTA has sold out its Catholicity to groups like Egale Canada and the Liberal government. OECTA is no longer Catholic except in name. Most regrettable is the fact that they have sold their Catholic identity, and are now doing the same with the innocent souls of the students they teach. Teachers should refuse to pay the union dues on the grounds that the union no longer represents them. Parents must be vigilant and strongly object if this content makes it to their local school. We hope parents may want to make it a Lenten resolution to become better informed about what their children are really learning in today's classroom.

Reprinted with permission from Every Day for Life Canada.