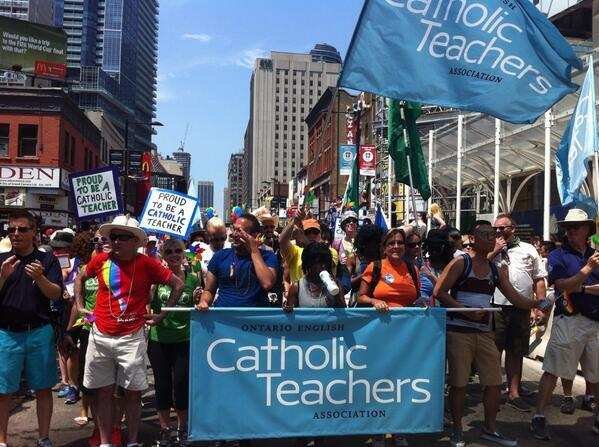 December 30, 2015 (LifeSiteNews) – The Ontario English Catholic Teachers Association (OECTA) this month sent out a letter to teachers with their union membership cards. The Association tells teachers about how they can enrol in professional development courses for Additional Qualifications. Teachers are reminded of the latest edition of the booklet titled, “When You Speak for Children.” The union also informs teachers that they will donate $30,000 to the Archdiocese of Toronto's Project Hope “to help a Syrian family find a new life in Canada.” Teachers on an individual basis are encouraged to help this worthy cause. So far so good.

Next the letter informs teachers that collective bargaining has been a top priority. The #TeachersMatter campaign and the hard work of the bargaining teams has made sure that teachers will get pay increases. This is just more good news.

However, the last part of the letter refers to a survey from OECTA's LGBTQ Workgroup. The group was formed at the Association's Annual General Meeting in 2015. The survey will given only to selected members in early 2016. Teachers chosen for the survey are told by their President Ann Hawkins this: “I encourage all those who receive the survey to participate, so the Association has the information it needs to move forward on this important issue.” What makes this an important issue? Teachers at this point should be asking questions.

This letter is more proof that OECTA is no longer a Catholic union. Yes, the union letterhead does say in large letters, “Catholic Teachers,” but its actions show that it isn't true. There's an assumption in the letter that all teachers know and accept the acronym LGBTQ because the president sees no need to even explain what the letters mean: Lesbian, Bisexual, Transsexual, Transgender, Two-spirited, Queer and Questioning. What about the teachers (it should be all of them) who don't support the initiative? And this is why OECTA has become a “Catholic” union in name only. It's actually false advertising. The word Catholic should be removed from its name.

In the Catechism of the Catholic Church we find this teaching on human sexuality:

Everyone, man and woman, should acknowledge and accept his sexual identity. Physical, moral, and spiritual difference and complementarity are oriented toward the goods of marriage and the flourishing of family life. the harmony of the couple and of society depends in part on the way in which the complementarity, needs, and mutual support between the sexes are lived out. (2333)

Each of the two sexes is an image of the power and tenderness of God, with equal dignity though in a different way. the union of man and woman in marriage is a way of imitating in the flesh the Creator's generosity and fecundity: “Therefore a man leaves his father and his mother and cleaves to his wife, and they become one flesh.” All human generations proceed from this union. (2335)

We see nothing in Church teaching about “gender identity” or “gender expression” or “sexual orientation.” OECTA can choose to do political work and social activism, but it should not do so in the name of what the Church teaches. This dishonest and scandalous for the Catholic community. Did the entire membership vote on carrying out the survey and making LGTBQ issues a priority? I doubt it. This is why teachers should refuse to complete the survey because it has nothing to do with Catholic education. Nothing. But it does demonstrate why OECTA cannot be trusted.

Here is another example: In 2012, they spent close to $3,000,000 to re-elect a Liberal government. The “Speak for Children” advertising campaign in 2011 cost OECTA well over $1,100,000. What was their objective? Certainly not to speak for children. It was to make sure that the Conservative party would be defeated and OECTA's friendly Liberals would get in power, using membership funds. OECTA has become a political entity and is no longer a Catholic organization.

This is a union, according to its own Report to Members 2012, that is called Catholic and promotes itself on doing justice and then contributes a pittance to help refugees have a home. To put this in perspective, OECTA gave $30,000 to the Project Hope from an annual budget of well over $40,000,000. It's just public relations work. OECTA has stopped putting children's learning, safety and souls as a top priority except of course in their advertising campaigns. They have forgotten that they are supposed to be a Catholic union serving teachers, students and parents. Teachers should now question the need for the LGTBQ survey and refuse to participate. We just wish the bishops of Ontario would take action and tell OECTA to delete the word Catholic from their name. This move would be a good start to truth in advertising.

This article is re-published with permission from the Everyday for Life Canada blog.

OECTA’s president boasts about winning praise from bishops despite marching in WorldPride
Waterloo Catholic school board votes to back OECTA’s WorldPride march, Halton board won’t oppose
Toronto Cardinal on OECTA at WorldPride: ‘What are you thinking?’