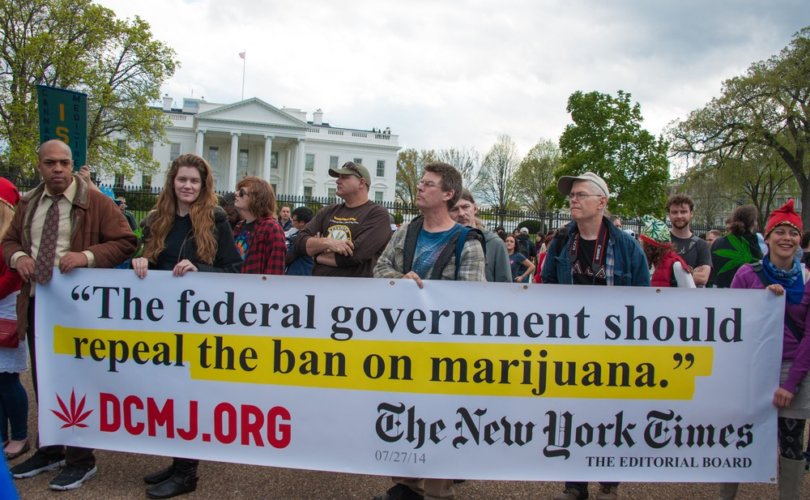 Protesters rally in support of the legalization of marijuana in front of the White House in Washington DC on April 2, 2016.Shutterstock.com

What I find most interesting about this budget boondoggle is what it tells us in the pro-life movement about the real political power of defiance.

Defiance of the unjust, judicially imposed “law” that is Roe v. Wade has rarely found favor in the pro-life movement. This makes sense only if one considers that the pro-life movement has, from its beginning, been controlled by attorneys closely aligned with the establishment wing of the Republican Party. These attorneys are literally the same guys who just gave us the omnibus budget boondoggle. I know this, because I have had the distinct displeasure of their attacks on my pro-life work.

From 2008 to 2014, I was involved with several important personhood initiative campaigns in different states around the country. We were a ragtag group of principled grassroots pro-lifers, young and old, who attempted to amend state constitutions to recognize the equal protection under the law for preborn children. We often circumvented the political swamp by reaching out directly to the voters through the referendum and initiative processes. Our greatest detractors, besides Planned Parenthood, who spent millions defeating our amendments, were the politically powerful attorneys who still rule the pro-life movement.

In a scathing essay against the state personhood amendments, Paul Linton, who served as general counsel for Americans United for Life, wrote, “[T]he most elementary error that infects state 'personhood' proposals is the failure to recognize the hierarchy of the law.” In an interview on the eve of the vote for one of our hardest fought initiative campaigns, James Bopp, Jr., who has served as general counsel for National Right to Life and is not coincidentally one of the GOP's top campaign finance lawyers, told National Public Radio that our initiative was “not only a waste of time, but potentially very dangerous[.] … The courts will readily strike it down.”

You can imagine how it felt for the God-fearing mom-and-pop pro-lifers who had just spent a year of their lives trying to get the personhood amendment on the ballot. When we needed them the most, our national leaders, political and legal and religious, publicly turned their backs on us. Their reasoning was, always has been, and always will be the same: “We need more Republicans to appoint judges who will overturn Roe v. Wade” and “Now is not the right time.”

At the same time these “leaders” were busy undercutting their base, a curious thing was happening in the marijuana legalization community. First in California, then all over the Western states, and then in the rest of the country, marijuana was being legalized using the same initiative process, in direct defiance of the “hierarchy of the law” that pro-lifers had been told only fools would dare to ignore. In fact, the Constitution's 10th Amendment “police powers” used to justify state-level drug legalization are the same legal weapons used by pro-lifers to re-establish personhood for the preborn. The late Dr. Charles Rice, professor of law at Notre Dame, wrote extensively about this idea, arguing that the states have a duty to legislate to protect their citizens and that the 10th Amendment recognizes that right and reserves it to the states.

Yet pro-life central command, which shares a virtual office with GOP headquarters, killed the idea. Defiance of the Supreme Court's tyranny was off the table, the establishment said, at least for pro-lifers. But when it came to marijuana, and when the money from the soon-to-be 20-billion-dollar marijuana industry started to roll in to the GOP coffers, things changed.

Federal law is absolutely clear that marijuana is a controlled substance with serious adverse effects and therefore, its possession, production, and distribution are a grave federal offense. This is not a judicially invented “law,” like the “right” to abortion, but an actual federal law passed by Congress after decades of debates and reviews. And yet state after state has legalized what is clearly a federal crime. And what has been the reaction of Congress and the president to this blatant defiance of the law? To prohibit the Department of Justice from using funds to enforce the federal drug laws! This is the power of defiance by a determined group of people.

While marijuana advocates are standing up for the all-important right to smoke and succeeding, pro-lifers who stand up in defiance for the right to life of little boys and girls are told to shut up, sit down, and allow the Republican Party attorneys to take care of it. Unfortunately, these attorneys have convinced the religious leaders, who, in turn, have convinced the base to settle down and wait. Perhaps the disgraceful omnibus budget deal will get some pro-lifers to stand up again.

Up to now, the pro-life movement has always settled for electing more Republicans and hoping against hope for better results. But results never come. They never will.

If you don't believe it, consider the case of state and local governments. Pro-lifers and grassroots conservatives have been so successful at electing “pro-life” Republicans to state and local elections that the GOP has achieved a supermajority nationwide, yet no actual long-term progress has been made. In fact, John Kasich, a Republican governor, who vetoed a heartbeat bill, saying – you guessed it – it would violate federal law. When a pro-life law actually slips past the establishment, like Mississippi's flawed 15-week abortion ban, the federal judiciary quickly steps in to eliminate the threat of any progress, and everyone complies with the tyrannical court.

There has never been an unjust law so worthy of defiance as Roe v. Wade. Martin Luther King, Jr. wrote in his Letter from A Birmingham Jail that “[a]ny law that degrades human personality is unjust” and that “one has a moral responsibility to disobey unjust laws.” Abortion doesn't just degrade the human personality. Its whole purpose is to eliminate it completely and forever.

Some law-abiding pro-lifers worry that defiance might lead to anarchy. But consider that there is no reason why a legislature or a lower court that defies the holding of Roe v. Wade would lead us to anarchy. The opinion of Roe v. Wade itself represents the destruction of the very purpose of law, which is the protection of life. Therefore, its abolition would represent a return to law and order, not a departure from it.

There is another group, besides the marijuana lobby, that has brazenly defied the “hierarchy of the laws” and not suffered any negative consequences. “Sanctuary city” activists have effectively overturned federal immigration law and refused to enforce it. But in signing the omnibus budget deal, President Trump and the entire GOP justified sanctuary cities by refusing to cut any of the federal government's funding for them. As the founders understood all too well, the main tool in Congress's toolkit is the power of the purse, and the president's is the veto. Neither chose to use these tools to prevent this debacle from happening. Both must be held accountable.

We must ask ourselves this: if certain liberal cities can decide to ignore an area of the law that is clearly and fully reserved to the federal government, as is the case with immigration law, why couldn't a predominantly Christian pro-life city refuse to enforce the unjust and illegitimate ruling of Roe v. Wade? For far too long, the grassroots pro-lifer has been politically represented by organizations led by Republican establishment operatives whose overarching interests are power and access, not principle. I know this isn't a nice thing to say, and I certainly don't relish saying it, but thousands of children are dying every single day in America. The uncomfortable truth has to be told if we hope to ever change things. The great news is that we can.

The pro-life grassroots can learn four critical lessons from the omnibus budget boondoggle.

One: The swamp-dwelling D.C. establishment, sadly, includes the D.C.-based national pro-life organizations. Check out the Twitter feeds of the three big “pro-life” organizations: National Right to Life, SBA List, and Family Research Council. Do you see any denunciation of this outrageous budget or the president, who refused to use his veto pen to stand up for life?

Two: In the political realm, apparently, only some causes are worth fighting for. When marijuana-smokers have more clout in courageously defying the federal government than pro-lifers who are fighting for the right of an entire class of human beings, we know we have a leadership problem. The truth is that the pro-life movement does not belong to the pro-life base anymore. It belongs to a few very partisan and very politically connected people who have shown, time and again, that they simply will not cross the GOP establishment and stand up for the babies.

Lesson three: Our interests need to be defended above and apart from those of the GOP. Sometimes our interests may coincide with the GOP, and sometimes they may not, but we cannot continue to allow abortion to be treated as a partisan political football.

And finally, number four: The pro-life base should not be afraid to defy federal law. In open defiance of Roe, we need to muster the courage to begin setting up sanctuary cities for the preborn, where local and state communities and leaders no longer tolerate or align themselves with the injustice of abortion.

In this way, perhaps the omnibus budget deal is a blessing in disguise. But it's up to us to make these changes happen. We must stop hoping to be a part of the latest grand political compromise and instead hold on fast to the truth. Given the current state of America, we must start demanding immediate and uncompromising action on abortion at the local level. This means we must be ready to rethink our overall strategies and focus our time and treasure in ways we have overlooked in the past.

We must organize local pro-life communities across the country. This is the driving idea behind Personhood Alliance and other localized efforts that are beginning to gain traction. As the rotten core of Washington, D.C. politics disintegrates into a maelstrom of moral corruption, we must continue to connect locally. But before we engage in any of this work, we need to strengthen our own families, which are our most local structures of support. We need to repent of our own sins, lest we become pharisaical, and pray to God Almighty that He may use us – the crooked pencils that we are – to write out His glorious plan.