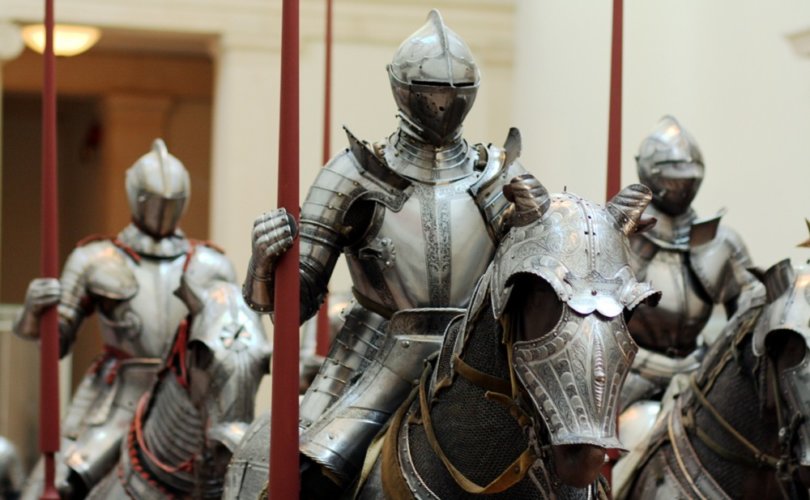 December 16, 2019 (CatholicCulture.org) — “Catholicism, by which I mean real Catholicism, is a fighting faith,” writes David Carlin for The Catholic Thing. To which I would add that Catholicism is, or should be, an offensive rather than a defensive force. As followers of Christ we are not charged with preserving our own position. The Great Commission requires us to move always forward, capturing new ground (or rather more souls). Church history shows that when the Church is not actively engaged in the work of evangelization — when we are preoccupied by the effort to ward off threats, as unfortunately we are today — the faith suffers. We are, as a faith, much better at offense than defense.

Nevertheless I admire Carlin's essay, “How Not to Defend a Castle,” because he correctly identifies the specific challenge that the Church confronts today. We are not, as a rule, fighting against Christological heresies. When a new acquaintance tells you that he was raised as a Catholic but drifted away, because “I had some troubles with what the Church teaches,” you don't immediately suspect that he is a monophysite. No, the odds are overwhelming that he could not reconcile himself to one or more of the Church's teachings on sexual morality.

That's undoubtedly where the fight is fiercest, Carlin observes. And if you are a competent general, you reinforce your troops at the point of the sharpest attack. You certainly don't ignore that sector, in the vague hope that the enemy will go away. “And yet,” writes Carlin, “that's the option that the Catholic Church in the United States has chosen in recent decades.” A strained, embarrassed silence on questions of sexual morality prevailed, even as Church leaders grab headlines by speaking out on political issues.

Since I wholeheartedly agree with Carlin's basic point — even though I am uneasy with the image of defending a castle — let me extend the military metaphor a bit further, to show that ultimately we have the same strategy in mind. If the western wall of the castle is being overrun, the best response might be to turn the big guns in that direction, to ward off the invaders until the wall can be rebuilt. In other words, to go on the offensive.

We are losing the battle on sexual morality because we, as a Church, too often are silent on those issues. When we do speak out, too often we are apologetic. Why? Hasn't the wisdom of Christian morality been proven, in the painful results of the sexual revolution? Shouldn't the proponents of secular hedonism be the ones apologizing, for the grave damage that has been done to so many thousands of lives, so many thousands of souls?

Missionaries throughout history have presented the faith as a way to escape misery. Today we should be offering an alternative to the misery of broken homes and families, of emotional and sexual dysfunction. It isn't really a matter of defending our fort, after all. It's a question of helping oppressed people overthrow the tyranny of a perverse master.